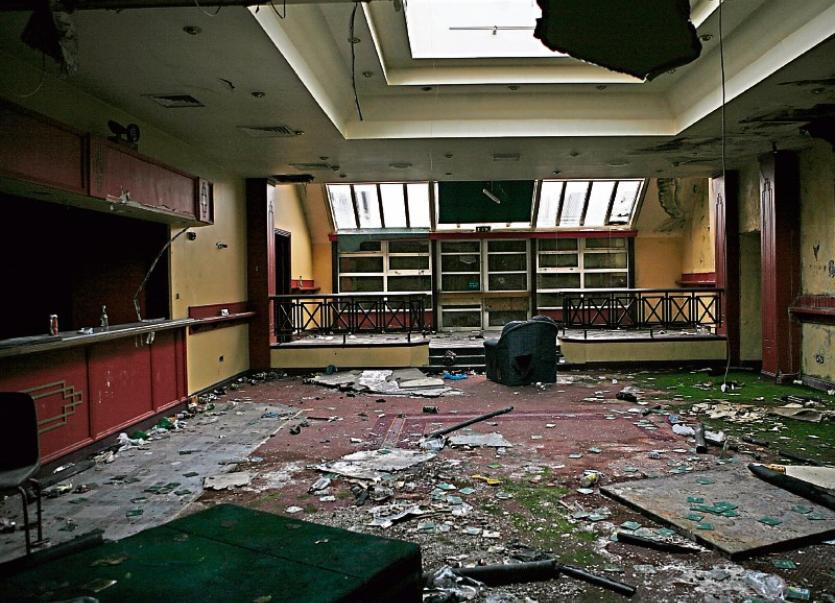 The vandalised interior of the former Clonmel Arms Hotel

One of the owners of the former Clonmel Arms Hotel admitted he was quite shocked when he saw the current condition of the building and has pledged to secure the site fairly quickly.

That was the message relayed by District Administrator Paul Murray to last week's meeting of Clonmel Borough District.

The site owner, who Mr. Murray said was acting in a caretaker capacity for NAMA, understood the concerns expressed by the members at a previous meeting.

This followed newspaper reports that the empty and dilapidated building was being used as a drinks and drugs den.

The District Administrator said he had a very good meeting with the owner, who also said he hoped there would be some movement in the New Year about the site being put back on sale.

He also gave a commitment that the outside of the building would be cleaned, which would include removing the shrubbery from the walls.

Having visited the site he discovered that access could be gained to the building from Blue Anchor Lane at the rear.

Cllr. Siobhan Ambrose said that any discussions about the former Clonmel Arms Hotel should be held in private because a very negative spin had been put on the site.

If somebody was interested in buying the site and did a Google search of the property they might decide to look elsewhere because of all the negativity.

She was concerned about all the negative publicity surrounding it and said they had to think with their "business heads" on. Other business people had asked her if anyone wanted the site to be sold.

Cllr. Ambrose said they all had great memories of the Clonmel Arms. They wanted someone to re-open it and return it to its former glory.

Cllr. Catherine Carey said the outside of the building should be cleaned as quickly as possible and an alarm installed. It was heartbreaking to see this former town centre hotel having deteriorated so much.

They should make sure it was completely boarded up.

Cllr. Pat English didn't think that any negative spin on the site had come from any council member. He hoped the site would be secured in the short term.

Cllr. Martin Lonergan said that any potential investor was hardly going to buy the site on the basis of what he saw on a computer screen. They would come down to have a look at it and would probably run a mile, considering the state it was in now.

He didn't think any negative spin had been put on the site by the council. Anyone who wanted to invest in the site would do so on the merits of its location and history.

Cllr. Michael Murphy said he had highlighted the site's strategic importance on several occasions, as well as its potential to generate the footfall that was needed to regenerate the town centre.

The council discussion about the environmental hazard posed by the building had been a reaction to an article in a national newspaper. He wanted those environmental issues addressed so there wouldn't be another article about another fatality on the site.

Cllr. Murphy said there was an immediate and real danger to any young children who wanted to explore the building, given the hazardous nature of the material inside there.