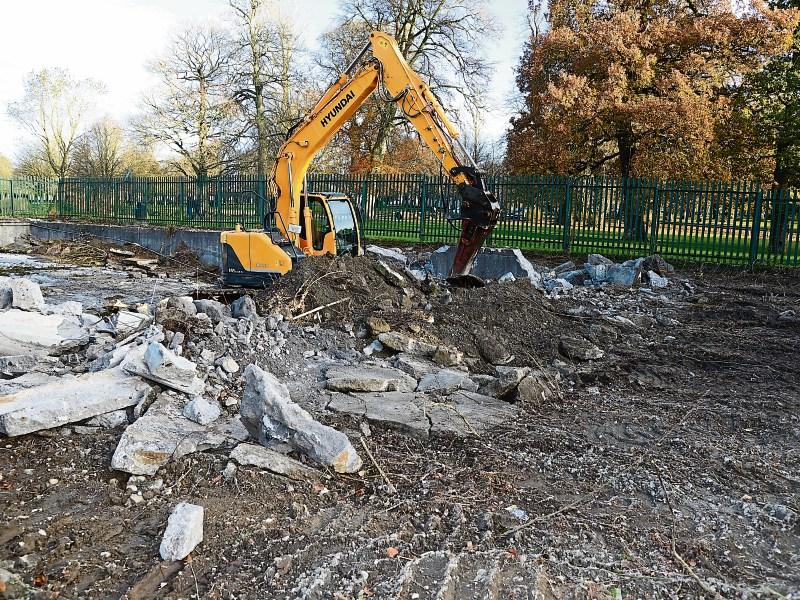 While most townsfolk in Templemore are believed to back the new project, for others it means the destruction of a much treasured swimming pool long associated with childhood memories.

Earlier this month, Cllr John Hogan said he welcomed €40,000 allocated for the refurbishment of the disused swimming pool. “I have been looking for something to be done with this unsightly part of the beautiful Templemore Town Park for the past 17 years as a Councillor for this area.”

On November 4th, “we received the funding from the Town and Village Renewal Scheme for rural Ireland.

“This project will be completed before year end and will further enhance this amazing facility. I had a motion at our District Meeting calling on our Council 'to prioritise the development of Templemore Town Park'.

“The Park has huge potential to add to the economic, social and cultural development of Templemore. The Council have prepared a rough draft master plan for the new lands purchased and this land may be made available for clubs or groups to purchase in order to develop facilities for Templemore. If anyone has ideas I can gladly arrange a meeting to facilitate discussions,” stated Cllr Hogan.

A new group has been set up called the Templemore Development Association, to act as a go-between the townspeople and the Council. It's hoped the group will give a voice to Templemore, filling the void left behind the abolition of the Town Council.

Vice Chairperson of the Association, and former Town Cllr Mick Connell said moves to revamp the pool go back to the early 1990s. “There were a few attempts to re-open it, but they failed. People have very fond memories of the Swimming Pool. I've seen photographs - you had swimming galas in Templemore when there were no swimming pools in Tipperary.” Mr Connell said he would support any scheme that would improve the Park: the pallisade style fencing around the pool is “unsightly”, and “not in keeping with that general area of the Park.”

A meeting took place in Templemore Town Hall recently between Co. Council officials and the Development Association regarding the Swimming Pool. It's understand there was a short window of opportunity to avail of funding for the sensory garden, meaning there couldn't be a longer public consultation process.

The meeting in the Town Hall included members of the former Town Council, County Councillors Joe Bourke and John Hogan, Director of Services Matt Shortt, members of the Tidy Towns group, and representatives of the new development association.

Cllr Hogan said the Council cannot ensure there will be another open swimming pool in Co. Tipperary, as they are too dangerous, and costly to maintain. The only option left was to transform the pool - now closed for over 20 years - into a garden as it was “either use the money or lose it.”

A meeting scheduled for next Friday, will not now go ahead. A note for our Templemore page this week states: “This meeting had been called so that members of the public could get an opportunity to air their opinions and views regarding the demolition of the swimming pool and the proposed 'Wild Flower Garden' to take its place. However, quick as lightning, on Monday morning machinery entered the park and began to bulldoze the swimming pool. Many people are very upset that this project wasn’t up for public discussion before the decision was made.”

Cllr Hogan said it was his view is that “the silent majority of people in the town are in favour of this site being cleaned up”. “They're in favour of enhancing the Park with a flower garden. Although there is some disquiet, the number of people who are for it, outnumber the people who are against it.” Cllr Hogan re-iterated the need for a clean up of that area of the Park: “It was like a pimple on the face of the Park. I welcome the cleaning up of a derelict site. It looked terrible. This will be sensory garden that will help people in wheelchairs, or who have a disability. It will be extremely accessible for buggies.”