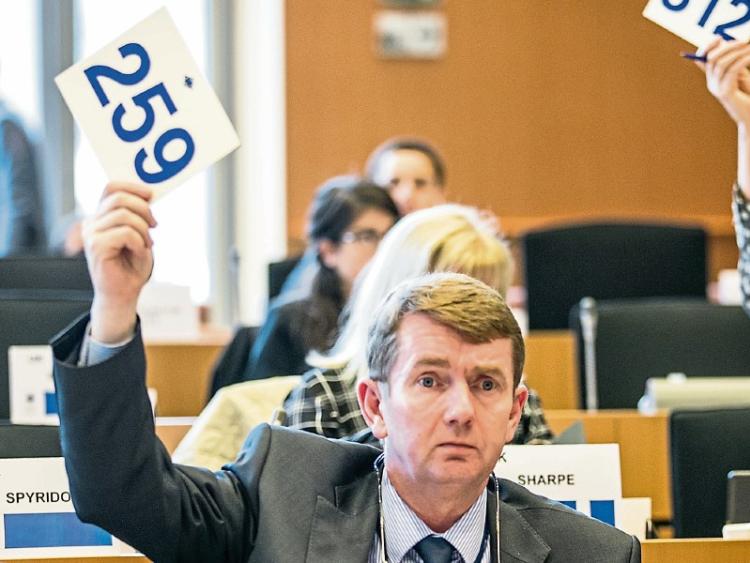 Tipperary councillor Cllr Michael Murphy is a man trying to wear a number of hats these days.

First elected to South Tipperary County Council in 2008, he retained his seat in the last local elections and was appointed as an alternate Ireland member on the Committee of the Regions in Brussels in 2015. And since July 2016, he has become a full member and was appointed head of the Irish delegation of 18 members.

Cllr Murphy from Clonmel has to juggle his normal day job at Enfer with his position on Tipperary County Council and Europe.

“I work in the private sector and being on the Committee of the Regions is very much a part-time job. I am still very much a public representative on Tipperary County Council,” he is at pains to point out.

Like his fellow members, he receives no direct payment for attending the half-dozen or so meetings each year, instead, getting a daily allowance to cover food and accommodation only when in attendance.

"I am delighted and honoured to be head of the Irish delegation on the Committee. My primary focus at present is to read myself into the brief and understand how it works,” he says. “I have to be a strong voice.”

Not many inside or outside politics would be too familiar with the Committee of the Regions, a body where 350 members of regional and local authorities bring local issues to Europe. It is an advisory body that gives regions and cities a formal say in EU law-making, ensuring that the position and needs of regional and local authorities are respected.

With Brexit figuring large in all political discussion about the EU, Cllr Murphy senses a real concern about its impact on EU structures. And Brexit needs to be taken in conjunction with a growing resentment towards the EU.

“I’ve noticed the fear at EU level, but they have to take a tough stance because of the fear of contagion. If the UK were to get a good deal, then it could lead to contagion. Brexit needs to be managed extremely carefully,” he says.

He points to the huge impact it could have on Ireland, which has €13bn in exports to the UK each year, of which €5bn are in the agri-food sector, an important factor in Tipperary’s economy.

“We had 3.5 million tourists from the UK last year, but more importantly, the UK is the EU’s second largest economy. The EU and its people need to realise that when the UK leaves, the economic size of the EU will shrink by one-sixth,” he says.

The Fine Gael councillor says that when it comes to the North of Ireland, he is all the time trying to be the calming influence on whether it should be a soft Brexit or a hard Brexit.

“As head of the Irish delegation I am all the time trying to emphasise that it needs to be managed carefully,” he says. “There is a need for free movement of people. The onus is on me to give the Irish perspective and highlight Irish concerns.

In terms of the EU being seen to deliver, Cllr Murphy can understand why there is “a lot of negative stuff”.

He highlights the investment in broadband in every town and village but asks whose responsibility is to tell people about it.

“Is it the Regional Authority, the local authority, MEPs, or the representatives on the Committee of the Regions?” he asks.

By way of highlighting this failure to communicate, he says he was “pleasantly surprised” to discover that Tipperary is second to Cork in the South Region for accessing EU funding.

“But I was not aware that Tipperary County Council had a EU unit headed up by Michael Moroney and that its Strategic Policy Unit was looking at funding. It is good to see that we have that unit and a lot of successful work is being done in 2016 on heritage, SMEs and environmental innovations,” says Cllr Murphy.

“And there is a lot of good work being done for SMEs around Clonmel through the Local Enterprise Office (LEO), which is quite good at getting grants through the European Regional Development Fund,” he says, highlighting, for instance, the online voucher scheme, which can be worth between €3,000 and €4,000 to companies; training and mentoring grants and primary and business expansion.

But he sees the need to ensure that a number of Tipperary towns are included in the next National Spatial Strategy. No Tipperary town was named as a hub or gateway under the last strategy.

“Gateway and hub status opens so many other doors,” says Cllr Murphy.

And with the Committee of the Regions focus switching from rural to urban in the next sessions, he points out that having that status is “crucial” as towns even as large as Clonmel are just county towns in Europe.

“It is certainly a disadvantage not to be one and that battle is starting to happen. We must ensure some of our towns have that status,” says Cllr Murphy.

“Tipperary is sending out a strong message that it has the facilities, but the EU can’t tell businesses where to locate, that is down to the IDA and others,” he says.

With talk of October’s Budget breaking EU fiscal rules, and with the EU Commission saying Spain and Portugal will have their Structural Funding stopped because they haven’t hit their fiscal targets, Cllr Murphy doesn’t see the same problem for Ireland.

“Ireland has obeyed the fiscal rules,” he says, but he does criticise those same rules for hindering capital investment.

“The fiscal rules are constraining Ireland. Interest rates are low and access to finance is attractive. But because of the rules, there has been a huge infrastructural deficit as a consequence of under investment over the last 10 years.