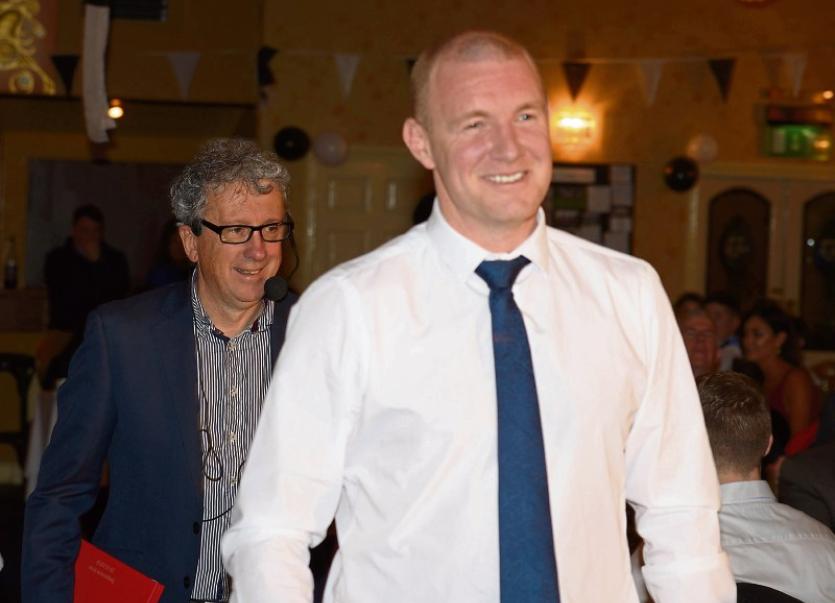 The 2016 JK Bracken's club dinner dance will be remembered for many a day as a surprise version of “This is Your Life” was sprung upon former Tipperary stalwart and JK Bracken's legend Eamonn Corcoran.

Just as Eamonn was tucking into his dessert the lights went down and the spotlight found its way to the red head from the Roscrea Road. Then, in from the back of the room, walked Listowel's Billy Keane who played the part of Eamonn Andrews to a tee.

A stunned Corcoran was ushered to the stage to thrash out his life story. And, the audience were equally aghast as many had no idea that any such event was planned.

Billy Keane was quickly into his stride as the first guests, who had been hiding out in Gerry McGourty’s back yard, arrived on stage.

First up were members of Eamonn's family including his parents Bill and Anna, sisters Mary and Gemma and brother’s Brendan and Liam. The night also feature a video link from his brother Gabriel in Paris.

Eamonn was clearly still in shock as he appeared speechless for the first time in decades.

Next up were his neighbours and swimming colleagues Neal Boyle, Mark Boyle and Michael O’Reilly (who flew in especially from Bournemouth to be there).

The man credited with discovering his hurling talent Brian Kenny (from Borrisoleigh) was next along with his former primary school principal Michael Maher.

The conversation and crack on stage was mighty as the son of John B brought the best out of all. There was a mighty roar when the Corcoran’s babysitter of 14 years Mary Shields made her appearance and boy did she have some stories from his youthful days. More video links followed from Boston, New York and London courtesy of Mervyn Deegan, Noel Stapleton and Damien Byrne.

In fact the show was now gone live on Facebook thanks to club sponsor Paul O’Brien who managed to stream it from his phone.

Corcoran was beginning to get his second wind as the penny had finally dropped. The Finnertys, The Kilroys, Darren Owens and Adrian Moynihan all rambled on together, some of whom Eamonn had not met in quite a while.

And, who will ever forget Alan Kilroy's speech?

Then it was on to his college life in WIT which brought Andy Moloney, Enda Everard and Henry Shefflin to the stage.

What a treat for the crowd and the look on the young JK Bracken's minor players' faces said it all.

We were right in the thick of his hurling career now and his colleagues from the 2001 All-Ireland winning team - Tommy Dunne, John Carroll, Noel Morris and Philip Maher - joined the group on the fast-filling stage.

Carroll brought the house down as he revealed some dark social secrets from days of yore.

When Brendan Maher appeared with his girlfriend Aoife Hannon we now had three All-Ireland winning captains and a former Miss Ireland in our midst - not bad for a club dinner-dance.

Of course Eamonn has to work for a living and his colleagues from Bank of Ireland were next to pay tribute - Eamonn Kelly, Kevin Nealon and Tommy Walsh. God knows how many All-Ireland medals were now on stage.

Nicholas English and Liam Sheedy, both unavoidably absent, then appeared via video link with a couple of mighty stories to boot.

Without doubt Eamonn has led the JK Bracken's hurling team for the last 20 years and the man that first brought him on to the team was next up, Lorrha’s Ken Hogan. Ken was also very instrumental in bringing Eamonn into the county set-up and was his senior manager in 2004-05.

Two men who represented the club with the same pride and dignity as Eamonn for many years on the football front were Kevin Mulryan and Sean Collum and both paid him a fitting tribute. Sean moved heaven and earth to make sure he was present while Kevin's words on stage were a lesson to all youngsters - did we expect any less from two more JK Bracken's legends. And, we definitely saved the best wine until last as Eamonn's wife Deirdre regaled us with tales of her husband's bravery when it came to dealing with the little mice that often venture in to one's household.

When Billy said “Eamonn Corcoran - this is your life” and presented him with the red book the audience rose as one to give him a standing ovation. And, never was there a man more deserving.

To Billy Keane, who was masterful as MC on the night, and all the guests who made such huge sacrifices to get there, we say a huge thank you from all associated with the JK Bracken's GAA club.

Not a single one of you sought a single cent - the night was a testament to both yourselves and the man you honoured.

Thanks for the memories Eamonn.