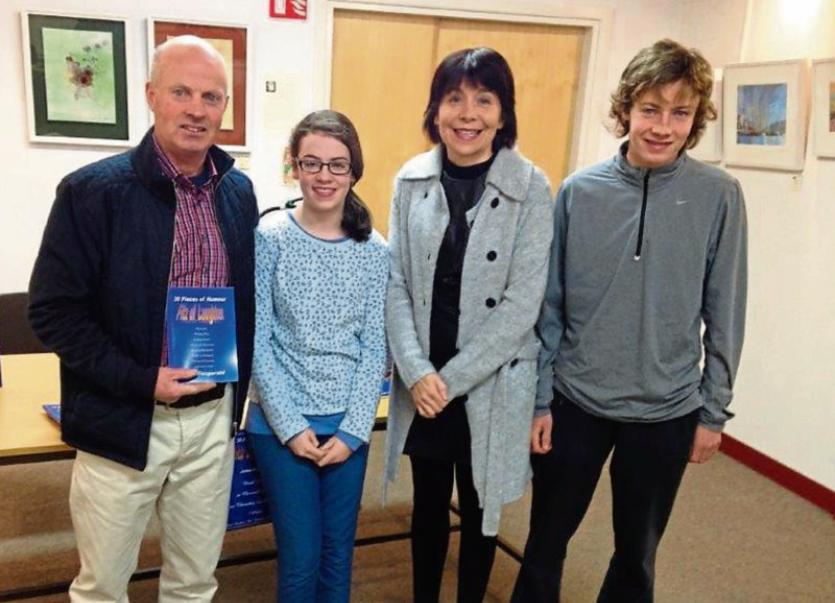 John Fitzgerald with his wife Patricia and children Evan and Holly at the launch of his latest book '30 Pieces of Humour - Fitz of Laughter'.

The second book from an award-winning author is a collection of short, humorous stories that he has written over several years.

30 Pieces of Humour - Fitz of Laughter is the latest offering from John Fitzgerald from Knocklofty, Clonmel, and which was launched last week at the local library.

What he calls "situational humour" runs through each of the thirty stories.

"Everyone has been in situations that weren't what they expected", he says.

"You find yourself in a situation and then it evolves. I'm pleased that there's a consistency to the stories".

Stories such as 'Corrections and Clarifications' have a clever play on words. With its starting point of a newspaper's apology to a family following an obituary it published, this tale is a perfect example of the witticisms that are a common thread in each piece.

Three of the stories - 'Postcode', 'A Cure for Insomnia' and 'Six-point-Five' - won John Fitzgerald prizes at Listowel Writers' Week in 2012, 2013 and this year.

'Postcode' discusses the introduction of Eircode, the launch of the national postcode system in July 2015 - "If E91DK49 sounds very like the late Ryanair flight from Glasgow to Dublin, then it also happens to be our new Eircode address.....I can memorise it, tattoo it on my arm or sing it to the tune of Tammy Wynette's D.I.V.O.R.C.E."

John, who holds an M.A. in Humanities says "I love story-telling, the whole idea of people engaging with each other, and humour has always been a part of that. Maybe that's something we need now more than ever in our lives".

A retired psychiatric nurse who worked at St. Luke's Hospital in Clonmel for many years, he also had a very successful athletics career that saw him represent Ireland at the World Cross-Country Championships in Norway in 1989 and the European Track and Field Championships in Split in Croatia the following year.

John and is married to Patricia and the couple have two children, Evan and Holly.

His latest offering was launched by Brendan O'Mahony at Clonmel Library last week.