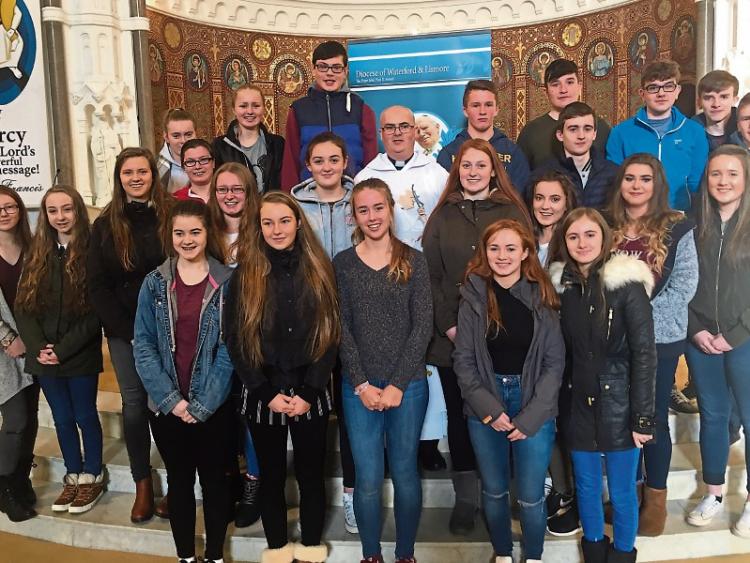 Fr. Michael Toomey, Ss Peter and Paul's, Clonmel, with Transition Year students from the town who have enrolled for the Pope John Paul II award.

Forty six Transition Year students from three secondary schools in Clonmel were commissioned during Mass at Ss Peter and Paul's into the Pope John Paul II award for parishes across the town.

Launching the award for the first year in Clonmel, the award has been running successfully across the Diocese of Waterford and Lismore for four years.

It is a way of encouraging young people to get involved in their community and parish, and as part of the commitment to enhancing the lives of young people on their journey through faith.

This award, which has been running very successfully across the country for the last ten years has already seen over 500 students receive a Gold Medal award in Cahir, Tramore, Lismore and parts of Waterford city. Many students also continue to help in their parishes and community by achieving the Papal Cross award into Fifth and Sixth Year.

At the Mass in Ss Peter and Paul's, Fr. Michael Toomey paid tribute to the students enrolling, saying they had already committed themselves to working in their schools and parishes and had done a huge amount of work in their community.

“Some of the students could not be with us here today, as they are already committed to serving in their parishes in one of many ministries they are part of”, he said.

“Having 46 students enrol for the first year of this award in Clonmel is a wonderful number”.

Taking part in this award will help these young people reflect on their relationship with God, where Christ is in the everyday bits and pieces of their lives” said Fr. Michael.

“The award will show them ways in which they can they make Him present among their peers, friends and family. It is a great time for these young people to step out as true witnesses to their faith by belonging to their parish and community in so many ways”.

Fr. Michael also thanked the parents, schools and principals for their encouragement and support of the award.

Many of the students have become more active in the life of their local parishes in and around the town, and all students hope to achieve the Gold award by May.

Fr. Michael wished them all the very best and thanked the students for their enthusiasm and commitment.

Further details about the award may be found on www.thepopejohnpauliiaward.com