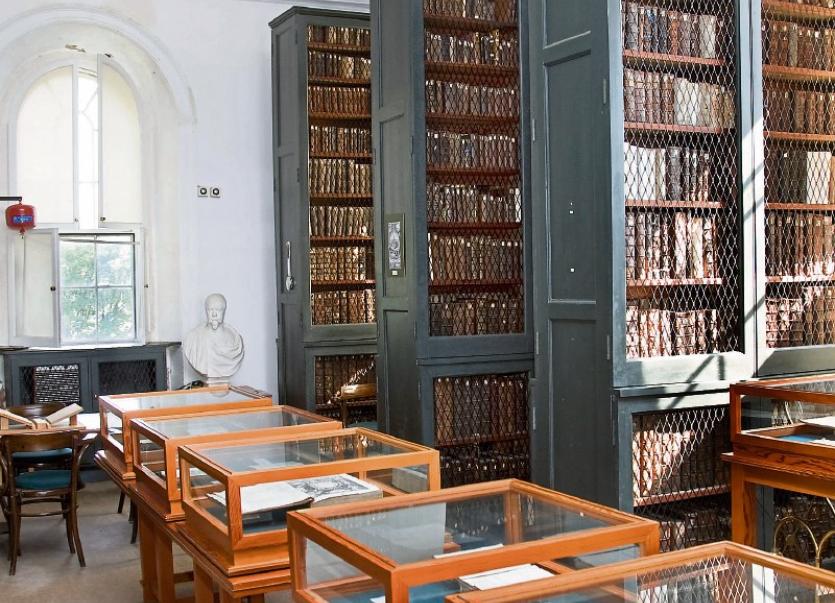 A rare, first edition catalogue of the Bolton Library is set to go up for auction tomorrow (Tuesday, December 13).

With an estimated price of €150 to €200 this catalogue of the books in the library is sure to attract attention.

The books in the Bolton Library were moved to the Glucksman Library at the University of Limerick this year, as part of the project to preserve the many rare and valuable editions there.

This catalogue of the ‘Library of the Dean and Chapter of Cashel’ is a first edition of an 1873 catalogue. It is being offered for auction at the Fonsie Mealy Auctioneers Annual Christmas Sale at The Gresham Hotel, on Tuesday, December 13. The sale will start at 10.15am and comprises of over 800 lots and consists of a magnificent collection of rare books, literature, manuscripts, maps and works of art.

Ken Bergin, Special Collections Librarian at UL’s Glucksman Library, and Gobnait O’Riordain, Director of Library and Information Services at the university, joined with Dean Gerald Field to announce the move, following an agreement between the Church of Ireland and the university last January.

Speaking to The Nationalist at that time, Dean Field said the books in the library collection are “literally invaluable,” explaining that no insurance company would even quote to insure them, as they are not replaceable. “It is really not an option to keep the collection in this building.” He added that the agreement with UL has “written into it” that an exhibition based on the collection will come back to Cashel.

The books in the library were bequeathed to the clergy of the Cashel diocese by Archbishop Theophilus Bolton, Archbishop of Cashel from 1730 to 1744. The books were collected by the archbishop then housed since 1836 in the Chapter House on the grounds of the Cathedral Church on John Street, Cashel.

There are more than 8,000 books in the Bolton Library collection but many contain more than one title, so it is estimated there are up to 11,500 in all. A new, comprehensive catalogue needs to be completed.

Some of the library's most famous works include fragments from the first printing press of William Caxton in the 1400s; the 1632 account of his time in the 'new world' by Captain John Smith, Governor of Virginia, which includes the stories of Pocahontas; Isaac Newton's 'Principia Mathematica' generally regarded as the greatest work in the history of science; an early edition of Dante's 'Divine Comedy' printed in 1512; it also includes first editions of Machiavelli's 'The Prince' and Cervantes 'Don Quixote' as well as hand-painted manuscripts that date back to before the invention of the printing press and important early volumes on Irish history.

At next week’s auction other charming children’s classics on offer include the First Edition of Tom Sawyer ‘Abroad by Mark Twain’ (1894) and First Edition of ‘The House at Pooh Corner’, by A.A. Milne (1928). Now a popular fantasy movie, a wonderful First Edition of ‘Alice and Wonderland - Through the Looking Glass and what Alice Found There’, originally written by C.L. Dodgson, will enter the auction estimated at €250 - €300.

An important collection of handwritten and typescript ballads, composed by renowned author and singer Brendan Behan estimated at €3,000; Items sure to pique interest from overseas include an excessively rare copy of a Benjamin Franklin Imprint, printed in 1744 in Philadelphia. With only a handful of copies held in Institutional Libraries Worldwide this item is expected to fetch between est. €7000 - €10,000.

An original signed volume from Jonathan Swift's Library with visibly signed ‘Jon: Swift,’ in ink is a very scarce and sought after item (est.€10,000 - €15,000) and will go under the hammer along with many other rarities.