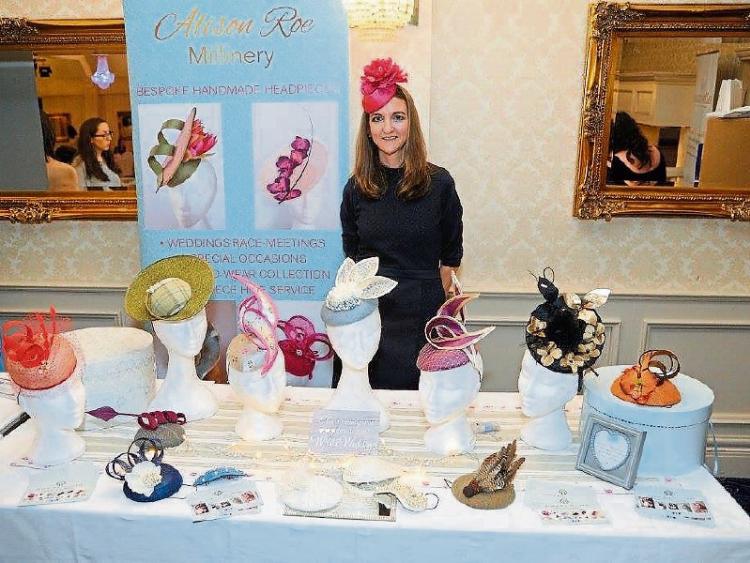 With a milliner as a great grandmother, a deep rooted love of fashion and a creative flair perhaps it was no surprise that Roscrea based Alison Roe would fall into the one time family business.

“I didn’t give up law to do this it just happened very organically,” explains the former solicitor who ended up switching careers after the birth of her youngest child and set up a millinery business which today counts Sky Sports presenter Rachel Wyse among her legions of fans.

Originally training as a solicitor, Alison worked at a practice in Ennis Co. Clare before relocating to a job in Birr. However when her youngest child became ill with kidney failure at nine months old, she decided to take a break from the world of law after 15 years to be with her youngest daughter who spent up to a month recovering in Temple Street.

“I suppose I got such a fright when Charlotte became ill that it changed my perspective on everything so I decided to take some time out to be at home with the three children.”

Alison, who says she was always interested in sewing and crafting, originally began making her own head pieces to attend races at Fairyhouse Racecourse where her husband Peter works as race course manager.

“Then other people that we’d know through racing started asking me to make something for them and before I knew it a little business was born,” she explains  adding that she also enrolled in a locally held millinery course to make sure her techniques and methods were right.

Interestingly as Alison’s new found career began to take off, she discovered that her great grandmother had also trained as a milliner; “maybe it was in the blood,” she offers.

“The same techniques of stretching and steaming fabrics over millinery blocks are still in use today so its nice to see those techniques aren’t lost. When my great grandmother was a milliner every woman wore a hat and gloves all the time. Its funny how styles change, a hat can go in and out of fashion.”

And although Alison describes her work as a “labour of love” preferring not to count how many hours exactly a hat or headpiece can take to construct, she recommends that clients come at least four weeks ahead of an event to allow time to “dye fabrics, source materials or locate that special embellishment.”

“Each piece is a work in progress. Everything is hand sewn, hand finished. I might do a few hours then leave it to dry. I wouldn’t even like to think about how many hours go into something and I try not to use glue guns or anything like that,” she explains of the high level of craftsmanship customers have come to love and expect.

“It’s lovely in that today when fashion can be quite disposable, being mass produced in factories to have something that’s been handmade and bespoke for you is a little luxury in life.”

“It becomes a little heirloom. I’m not a slave to the fashion trends but a lot of my pieces would have a little vintage feel to them so you certainly hope that they can be worn for many many years to come.”

And indeed it’s this approach to heirloom keepsakes rather than fast fashion that has given rise to another of Alison’s projects created for her daughters.

“I make headpieces for the girls using old dresses that were particularly special so that they can look back on photos and say I remember that day and then they have a keepsake that I’ve put away for them once they’re older.”

Today Alison works from a converted coach house turned studio on the grounds of her Roscrea home and opens for appointments in the morning and evening, allowing her to fit her working hours around caring for a young family and homework duties.

“Once the business started to get bigger I moved it out of the house due to the nature of the materials- delicate feathers, beads and lovely materials that two little girls would love to get their hands on. It also means I can close the door on it in the evening which allows you to have time away from it as well,” she says.

And like so many designers before her Alison says her dream client would be the Duchess of Cambridge who famously helped make wearing a hat or headpiece fashionable again.

“A lot of milliners have a lot of to thank Kate for. Se has an understated elegance which I quite like and I wouldn’t be saying no if I got a call from Kensington Palace. You can change an outfit considerably by the accessories and for people going to several weddings a year hiring a different headpiece or hat can give much more wears to an outfit,” adds Alison who launched her own ready to wear collection last year.

“I do like a bit of individuality and while trends are interesting I think its nice to put your own spin on it as well. When a customer comes in we look at shape, styles, the colour of their outfit and then I come up with a bespoke piece for them.”

Today Facebook, Instagram and of course word of mouth have become the backbone to Alison’s business with Alison herself admitting that setting up a “cottage industry” like hers 30 years ago would have proven pretty much impossible.

“Social media has changed everything. It’s amazing how you can reach such a big audience that you wouldn’t have been able to even 15 years ago. I get a lot of customers through recommendations or women who have had something made and then a friend asks where they got it and so on but Facebook has helped businesses like mine grow very quickly and build up a following.”

Another big scoop for Alison also occurred earlier this year when she was called upon to create a custom made head piece for Sky Sports presenter Rachel Wyse to judge ladies day at the Grand National.

“I was absolutely thrilled to get the call and Rachel has a massive reach on social media so it was great for the business, especially when she featured in all the papers the next day,” recalls Alison who also counts Tipperary Rose Fiona O’Sullivan among her many followers.

“It definitely would have been scarier giving up law to do something like I did but the catalyst of taking a break from law because of a sick child put everything in a very different focus. I think the fact that it happened so organically made it a very different scenario but I love what I do and really have the best of both worlds. It makes for a very happy life.”

Seamus Darby: praised by a judge for his generosity towards a woman whose dangerous driving left him with serious leg injuries