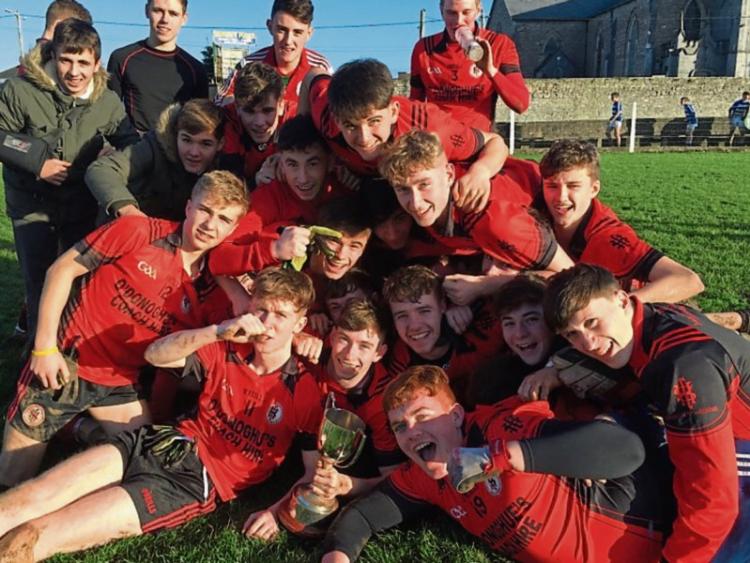 The victorious Clonmel High School with the McGowan Cup after defeating Rockwell in the schools senior county football final.

The prestigious McGowan Cup was secured by a High School team whose quality of passing and movement throughout the hour was a level above their opponents.

A  six point half time lead and two early second half goals set them on their way but Rockwell showed great character to battle their way back into the game after finding themselves nine points adrift with twenty minutes left.

The High School were the sharper and dominant team for the majority of the match which was made much more competitive when Rockwell, who had failed to score in the first half, put in a much better performance in the second half.

The superb pairing of Ben Owens and Mark Stokes in the middle of the field for the HighSchool ensured the Clonmel team were in complete control for the entire first half which saw them register six points to no reply.

TheClonmel side, given their possession, failed to take full advantage of that first half  superiority hitting eight wides in that thirty minute period.

Rockwell, despite the lion hearted efforts of Jack Harney at centre back, were unable to penetrate the excellent High School half back line of Daragh Bolger ,Diarmuid  Mulcahy and the outstanding captain Jamie Grant.

When Rockwell did have possession in that first half they squandered it by gifting possession back to their opponents with sloppy passing which not only cost them dearly in the final third but also in defence and those errors were punished by a well drilled and  spirited High School.It was hard to see any way back into the game for Rockwell at half time  and even more so after ten minutes into the second half.

Rockwell came out for the second half like a team transformed.Despite scoring three points  in the opening six minutes through a brace from MarkKehoe and one from Conal Kennedy they found themselves  with an even bigger mountain to climb.

Shane O'Meara had slotted home a penalty  four minutes into the second half for the High Schooland when the Clonmelside netted their second goal of the game ten minutes into the half it looked as if Clonmel were going to coast to victory.

It was an absolute gem of a goal set up with an excellent pass from Mark Stokes to Manus McFadden who used his pace and guile to evade a number of defenders before finishing cooly to the net.

That goal had increased  the High School  cushion to nine points ,2.6 to 0.3, but to their credit Rockwell made a real game of it.

Rockwell substitute Cian Mullane pointed before Conal Kennedy converted a free .A minute later  Kennedy reacted quicker than anybody else in front of goal when he poached a goal after taking full advantage after Chris Egans goalbound shot had been blocked.

Rockwell  had reduced the gap to just four points  with thirteen minutes left and were well  in contention.

That Fogarty point was to be the High School's last score of the game but they had done just enough with Rockwell taking just three more scores in the closing minutes before running out of time with just a goal between  the teams at the final whistle.

The role played by Joe Gunne,in minimising the influence of Mark Kehoe,former Tipp minor hurler and footballer,was crucial to the High School game plan.Aidan Tobin's accurate kick out's were an important feature of  the ability of  the High School to win a huge amount of possession.

The workrate of Cillian Crowe,Conor McGrath, Dean McMorrow,Shane Egan,Sean Maher ,Adam Peters throughout the hour ensured Clonmel High School were able to see this game out .

Rockwell were always chasing the game after a very poor first half.They upped their game in the second half  with strong performances from Conal Kennedy,Jake Flannery,Jack Holohan,Stephen Grogan and Mark Kehoe.