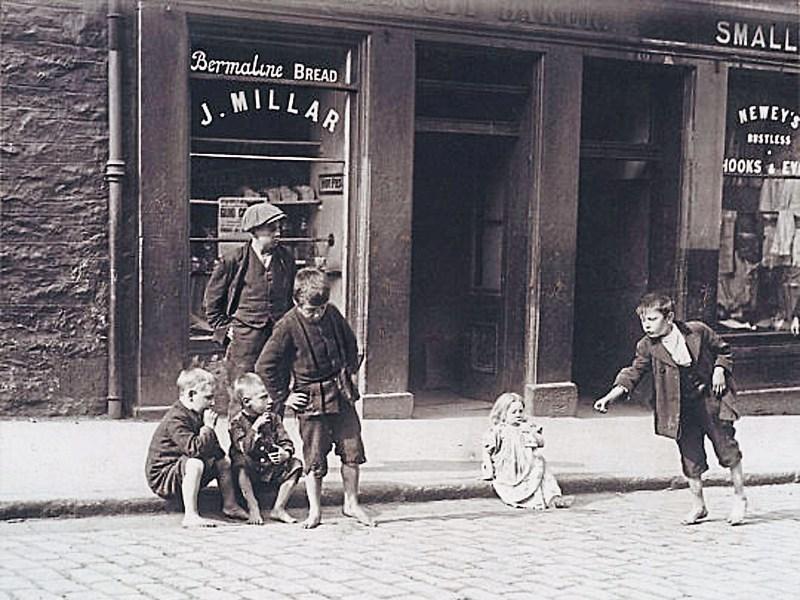 Pitch and toss goes back a long way in many towns as these youngsters demonstrate.

If you heard the shout “Rozzer’s you were on high alert. Inevitably the next cry you would hear was “Vamoose” and then you legged it without daring to look over your shoulder.

That was how the “feck school” or “pitch and toss school” as it was commonly known in Clonmel came to an abrupt end as participants knew the local guard was on the prowl again.

In Clonmel there were a number of locations where this popular recreational activity was played out but the “green patch school” was the most renowned of them all and one of the last toss schools to survive.

The “green patch” as it was commonly known, stretched from Bruno Cardi’s boundary wall (north) right down and around to Philip Carroll’s home in Queen Street. It has since been replaced by Pearse Park. However, it was at the north wall of Bruno Cardi’s beautiful property which was the permanent home for the toss school.

Conditions varied slightly from school to school but in the memory of this source there was one constant, certainly in the green patch school, and that was that coins were seldom if ever known by their face value. A half-penny was referred to as a “make”; a threepenny bit (or piece) was a “trummer”; a sixpenny piece was a “sprazzy” (known by some as a “tanner”); the shilling was a “bob”; the half crown was a “half-dollar” or “half an ox”.

While the actual game was in progress “the school” had to adopt strategies to avoid being detected by the gardai. One strategy was to post a scout at the corner of Cashel Road and Queen Street. That lovely man Johnny O’Sullivan (RIP) of Rink Place was the usual scout.

While awaiting the almost inevitable arrival of the gardai, Johnny would rest his arm on Misses Donovans’ railings. Upon sighting of the gardai Johnny would yell out “Rozzers”. This cry was usually followed by the exhortation “Vamoose”, delivered by Joe or John McGrath formerly of Cashel Road. John, a lovely man, was affectionately known by the soubriquet “Toss” McGrath. Happy times and golden memories indeed. 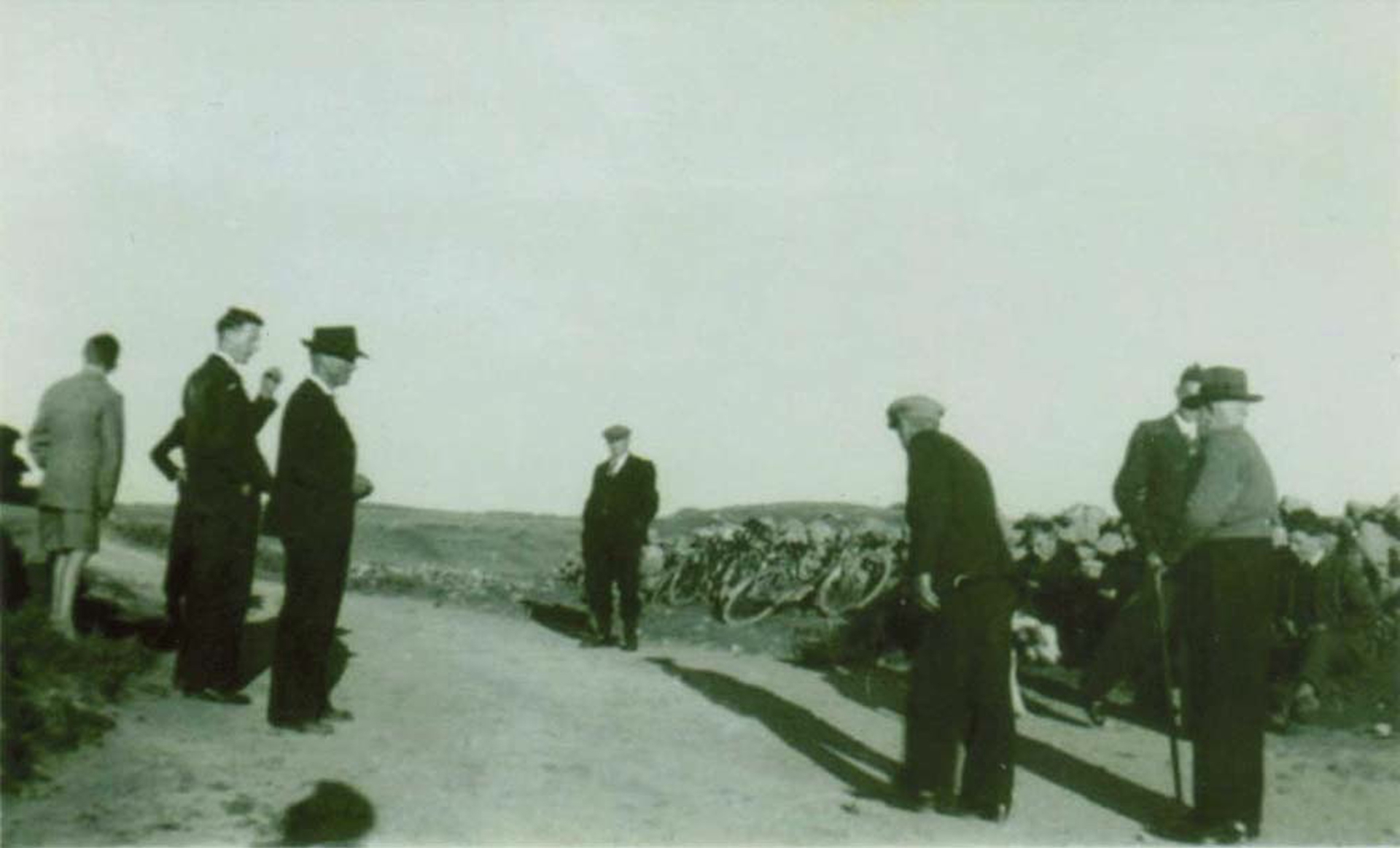 Pitch and toss was a popular game for all ages.

“Rozzers” and “vamoose” were very popular words in Clonmel. It is believed that both words were popularized when introduced by army men returning home from abroad. Rozzer being an old English word and vamoose, brought back from the Spanish Civil War, meaning to depart quickly or clear off.

“Feck schools were given to the ageless occupation of gambling. The word “feck” is a colloquialism but “feck” schools became more commonly known as Pitch and Toss schools. It appears that this form of “gambling” is indigenous to Ireland. Emigrants took it with them to the building sites of England and even farther afield to the sheep farms of Australia where it became known as “Two Up” But it’s home ground is the patches of waste ground scattered about towns and the practitioners ranged from small boys playing for pennies to adults who were known on occasion to stake their wages on the outcome.

No-one seems to know for sure when, how or where the “game” originated but certainly it had been played for generations. But I guess the increasing standard of living and the more sophisticated tastes in gambling heralded the end of the “feck” school era. 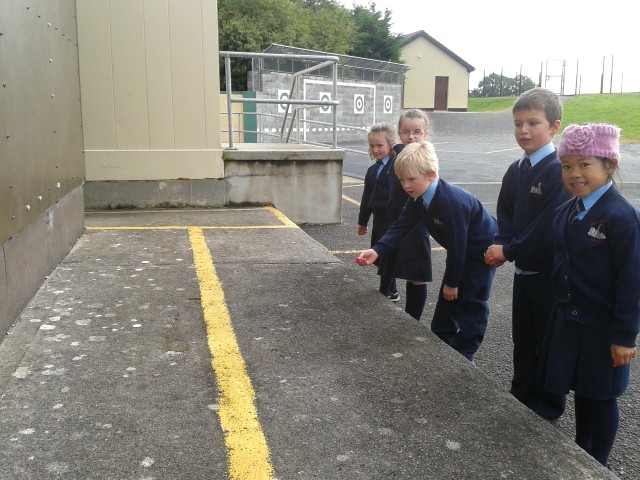 Having a quick game at the school break.

The essential technique of the game was simple. A marker or “jack” was placed, a line was drawn and from this position the players pitched half-pennies as near as possible to the “jack”. The person nearest the jack was then first to toss the coins. The person farthest from the jack, while being the last in line to toss, had the option of placing the jack for the next round.

The pitching was a complex and skilful part of the game and much depended on the position of the jack and the condition of the ground. In soft conditions the half-pennies were inclined to lodge in the ground, so the technique was to lob the coin allowing it to land flat on the surface. Another technique was to pitch the coin so that the rim of the coin would bite into the ground as near as possible to the jack. However, when the ground was hard or when the jack was placed near a concrete surface, pitching was a much more demanding business – in which case the pitcher had several options. He could, if the surface was smooth, skate the coin along the ground hoping that the coin would come to rest near the jack. This technique required that the coin be tossed in a low trajectory, eliminating the danger of the coin bouncing off the surface and rolling. Alternatively he could hop the coin off the ground, using a high trajectory toss, anticipating that the coin would bounce in the direction of the jack. Finally he could risk pitching the coin as close as possible to the jack and trust that the coin would land and die. Naturally, the problem of deciding which coin was nearest the jack was of paramount importance and much debate and argument ensued.

If pitching was the more skilful aspect of the game, “tossing” was at the whim of the gods and the mercy of the players. When the order of tossing was decided, the first person to toss had two options. He could, if he wished, decide to go for “two for the lot”. He tossed two coins, if they turned “up heads” he won all the money; if “harps” (or “ships” on English coins, although they were still known as “harps”) turned up, he lost. If a “head” and a “harp” appeared he could either toss again or else elect to keep half the stake. Again he could decide to toss all the coins two at a time retaining those which came down “heads” and losing those which came down “harps”.

In turn the “harps” were given to the next player in line who tossed to keep the heads and lost the harps. And this continued until all the coins were disposed of and then the players pitched once more.

Tossing, although a matter of luck, was surrounded by a host of taboos. “Thumbing” and “fleshing” were strictly prohibited in the belief that placing the thumb on the coins or placing the coins on the flesh of the hand where the fingers joined the palm at the time of tossing, gave the “tosser” the advantage of turning up “heads”. The coins were generally tossed from the fingers and a combination of grips were used to ensure success. If a player wished he could use a “tosser”. This usually consisted of a match box or a cigarette box, or a hair comb. But there was always a serious objection to shiny or slippery surfaces and accordingly pieces of glass were excluded.

It was not uncommon for the shorter form of the game to be adopted, that is to say just the tossing element.

Like all other places Clonmel has changed and I suggest not always for the better. Many of the old customs, traditions, games etc., have disappeared and sadly old friends and family have also passed on. But we’ll always love you Clonmel and thanks for the memories.