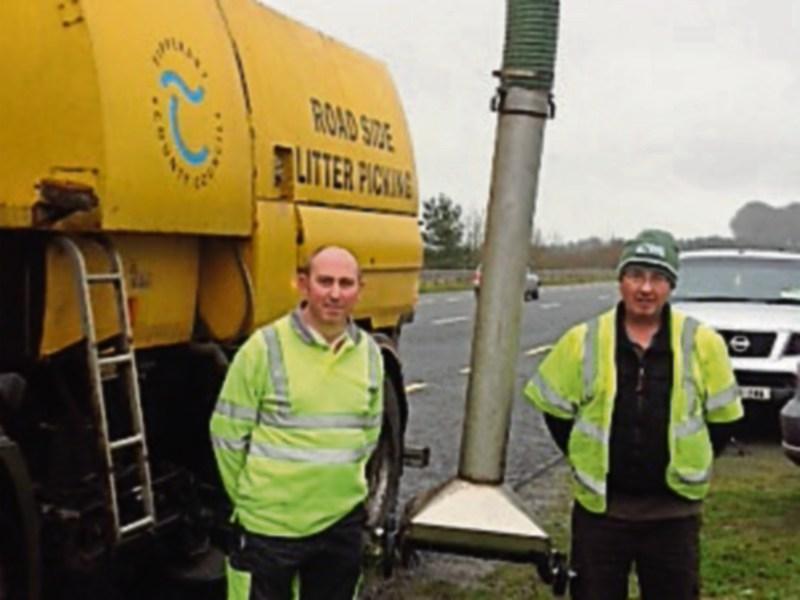 A Tipperary Co. Council staff member has invented a new litter picking truck that hoovers up recyclable rubbish strewn along the roadsides on the grass verges of approach roads to the county's towns and villages.

Council Environment Enforcement Officer Anthony Wynne from Clonmel gave a presentation on the new litter picker and showed a video of the vehicle in action on the Cahir Bypass to the local authority's elected members at their monthly meeting in Clonmel.

He said the problem of littering on the sides of roads on the approaches to villages and towns was brought up at a litter enforcement meeting and he came up with the idea of converting one of the Council's old road sweeper trucks.

He took his idea and design to Gleeson Steel & Engineering in Gortnahoe and the firm created the new litter picking vehicle with PSI based in Piltown, Co. Kilkenny creating the pneumatics and Mayo based Genfit making the funnel.

The machines comprises a funnel and brush arm attached to the side of the road sweeper with four wheels and brushes on three sides of its mouth.  The arms is operated using a joystick and a camera in the truck provides information on the type and location of rubbish on the roadside.

Mr Wynne said two people work on the machine, the driver and a worker who operates the arm that sucks up the litter. They never have to leave the truck when it's operating. All the rubbish the picker gathers is recyclable as its sucked off the ground rather than scraped.

He pointed out that the picker collected 156 kgs of rubbish on the trial run along Cahir Bypass and the waste was taken to Cashel Recycling Centre.

Marion O'Neill, Senior Executive Officer with the Council's Environment Department, told the meeting the litter picker could also be used to clear footpaths of fallen leaves during the autumn.

She said it was proposed to send the litter picker to operate in each of the Council's five municipal districts for a week over a five week period early next year.  The Council plans to gather a lot of information on the machine during this pilot phase of its operation including the amount of kilometres it travels and amount of waste it collects and the location of litter blackspots.

Council Director of Services Sean Keating said it was a very innovative idea and it should be a huge improvement on the manual way of cleaning this litter.

Councillors heartily welcomed the creation of the litter picker. Thurles Cllr Jim Ryan (Ind) said it was a great addition to the Council and he was delighted it was going to be sent to each municipal district. "There are quite a number of approach roads in my area that need it," he said.

Donohill Cllr John Crosse (FG) said the litter picker was a "brilliant innovation" while Ballingarry Cllr Imelda Goldsboro (FF) said it will be a big help to the county's 87 Tidy Towns groups. She proposed the machine be deployed to work with Tidy Towns groups in their efforts to keep their communities clean. Cllr Goldsboro also praised the Council for supporting a local business by engaging it to develop the litter picker.