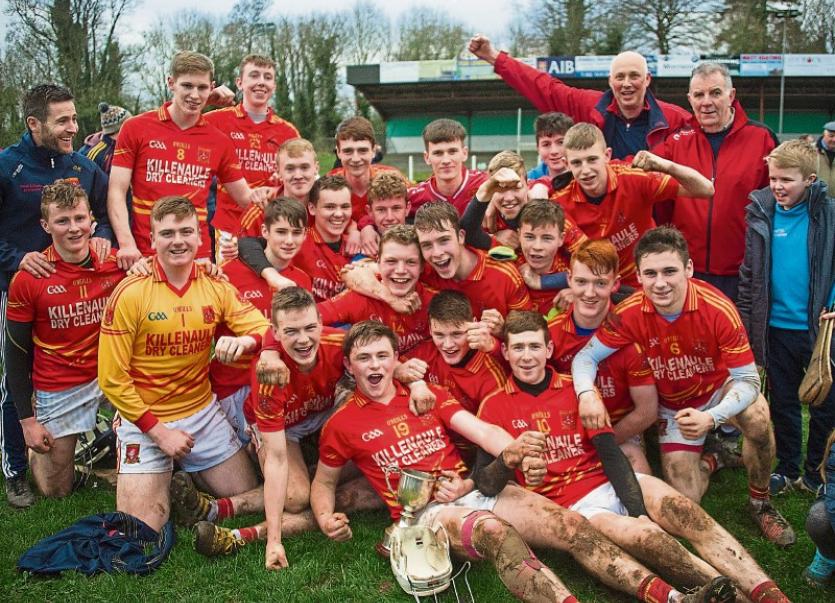 They will ring in the new year in Killenaule tonight in an extra special way after the club captured the South Minor ‘A’ Hurling Championship this afternoon with victory over St. Mary’s at Cahir.

Played on the very last day of the year, an enthralling encounter went all the way to extra-time and down to the very last moments before ‘The Robins’ could celebrate a very sweet victory.

Not alone had they defeated the county champions – St. Mary’s won the county crown in October when they defeated JK Brackens Og in the final at Semple Stadium – but Killenaule did it the hard way, and a couple of times at that!

Midway through the first half they trailed by 1-3 to 0-0 but managed to cut the deficit to just two points at the break, the goal coming from a long range free by Sean Kennedy that the Killenaule defence messed up. But Killenaule could be grateful to some excellent long range points from Eoin Barry who scored eight from frees over the day.

At the start of the second half Killenaule conceded a second goal within a minute when Michael Murphy ran on and kicked the sliothar past Graham O’Connor for a five points advantage. To compound their problems Killenaule were then reduced to 14 men just five minutes after the re-start when Gus Browne was sent to the line for a second yellow. Now they had a mountain to climb against the county champions who looked in a great position to round of their magnificent year in style.

A goal by Dean O’Connor nine minutes into the second half after Cillian O’Dwyer had made an excellent run through the heart of the Clonmel’s side defence gave Killenaule the momentum they needed and reduced the deficit to a single point, 2-6 to 1-8.

But with seven minutes remaining Killenaule were back to four points in arrears before a great finish saw them force the game to extra-time.

A goal three minutes from time by Paudie Feehan operating at full-forward saw Killenaule level at 2-9 apiece and still they had to hold on with fingers crossed as St. Mary’s had a last chance to win it with a 65 which, for Killenaule fortunately, went wide.

Back to 15 a-side game at the start of extra-time, Killenaule got a massive boost when substitute Darragh Fitzgerald ran on to Jack Hayes’s long delivery to slide the sliothar past the excellent St. Mary’s keeper and in the process give his side the lead for the first time in the final. It was to be a lead they would doggedly hold on to till the very end.

Four points to the good with time almost up St. Mary's Sean Kennedy blasted a 13m free past eight Killenaule players on the line to reduce it once again to a single point game. But there was to be no denying Killenaule as referee Keith Delahunty’s final blast moments later gave them the sweetest of victories at year’s end, and in all fairness they deserved it for their never-say-die attitude on the day.

It was an outstanding team performance from the winners who never let up. Cillian O'Dwyer at centre-back was outstanding and the man of the match, but they were all heroes with Paudie Feehan, Liam Maher, Eoin Barry and Andrew O'Connell standing out when most needed.

St. Mary's were gutted at the finish after giving their all. Having led right throughout they were reeled in at the end of normal time by a great goal by Paudie Feehan and in extra-time the momentum swung to Killenaule. Enda Dunphy in goal pulled off a couple of excellent saves while in defence Joe Gunne and Jamie Maguire were superb. Gavin Ryan, despite picking up an injury, was inspirational in effort and attitude, while Michael Murphy and Sean Kennedy were their most dangerous forwards. However 15 wides, an over-reliance on Sean Kennedy's free-taking and the absence of a few key players on the day through illness and suspension didn't help their cause. To their credit though they went down fighting to the very end of a thrilling game; they can take consolation for that and they are still county champions at the end of the year.