Water: more questions in the pipeline over Tipperary project 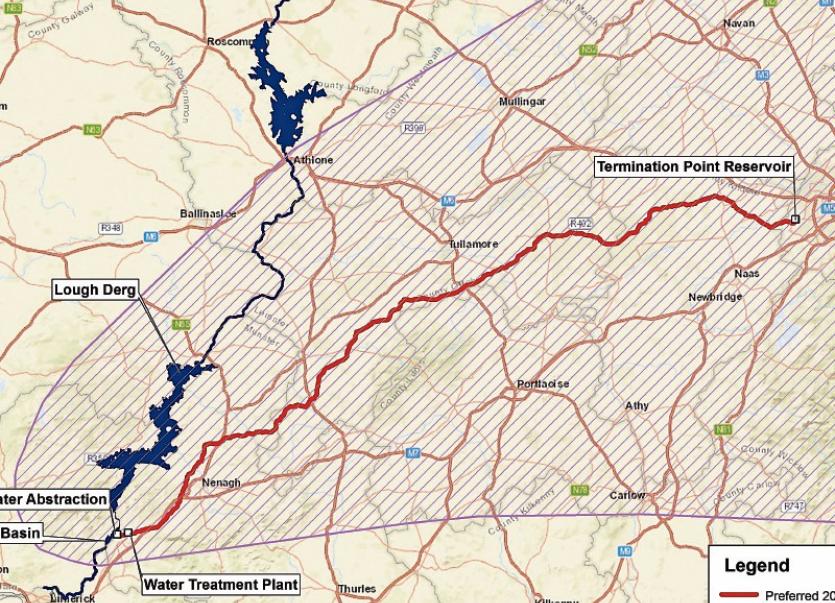 The proposed route for the River Shannon water abstraction plan

Nenagh councillors are demanding that Irish Water meets them over its plans to run a pipeline from Parteen Basin below Lough Derg to Dublin.

The councillors are not convinced that the €800m to €1.2bn project is the correct way to go about solving any issues with water that might be affecting the capital.

The call comes after a group called Fight the Pipe was set up by landowners along the proposed 170km route before Christmas following a meeting in Ardcroney.

“The people affected by this pipe have a lot of questions,” said Cllr Joe Hannigan.

He described the battle beween Irish Water and those against the proposal as being like David and Goliath.

“Irish Water can employ consultants and the people on the ground haven't the same level of funding to see if the correct thing to do is to bring a pipe across the country to supply Mid-Ireland,” he said.

“We have an obligation to ask them why other options were not chosen,” said the Independent councillor.

He said that many farmers did not have an issue with the pipe itself, but questioned whether it was the right thing to do.

He asked that the State agency be brought back to Nenagh so that questions that had not been asked at a full Tipperary County Council workshop and two public consultations in November could be asked.

He has been supported by Cllr John Carroll who highlighted the “significant waste” in setting up Irish Water.

He said that 40 per cent of the 330 million litres of water to be taken from the Parteen Basin daily would be wasted by the time it reached Dublin.

“Would it not be advisable to identify the conservation element. They will talk about conservation but they won't do it,” he said. “Where is the cost / benefit analysis?”

The Fianna Fail councillor believes that rural Ireland is in a “worse place” than before the 2016 election.

And Fine Gael's Cllr Ger Darcy said Irish Water should come back to the local councillors because they were “at the coalface”.

The councillor and farmer said there were questions to be asked about compaction of land, access to land, loss of income and loss of the Single Farm Payment as well as security.

He described any information given so far as “sketchy”, warning bits of land would become “useless”.

Cllr Darcy has called for a hydrologist to look at the effects of putting the pipe through the land, and pointed out that only local people could tell them the impact of the pipe on turloughs, lakes and streams.

“Irish Water needs to get its act together,” he declared.

Another councillor supporting the call for a fresh meeting is Cllr Michael O'Meara, who wants the agency to meet local councillors only and not the full council.

Cllr Hughie McGrath has also supported the call, but pointed out that there had to be a move at Government and EU level to rebalance Ireland and bring people to the water and not the other way round.

“We have the infrastructure. The M50 is becoming a giant car park. We need to take the pressure off Dublin,” said Cllr McGrath, a member of the EU's Committee of the Regions.

However, area manager Marcus O'Conor has warned that, while he will bring the councillors' request back to Irish Water, he didn't think they would agree to engage on a local level as they had met the full council.

“There was a workshop in Thurles and a number of you asked questions and they did try to answer them tughtfully,” he said.

Tipperary County Council has engaged its own consultants to handle the project and meet Irish Water, but their work was not complete, said Mr O'Connor.