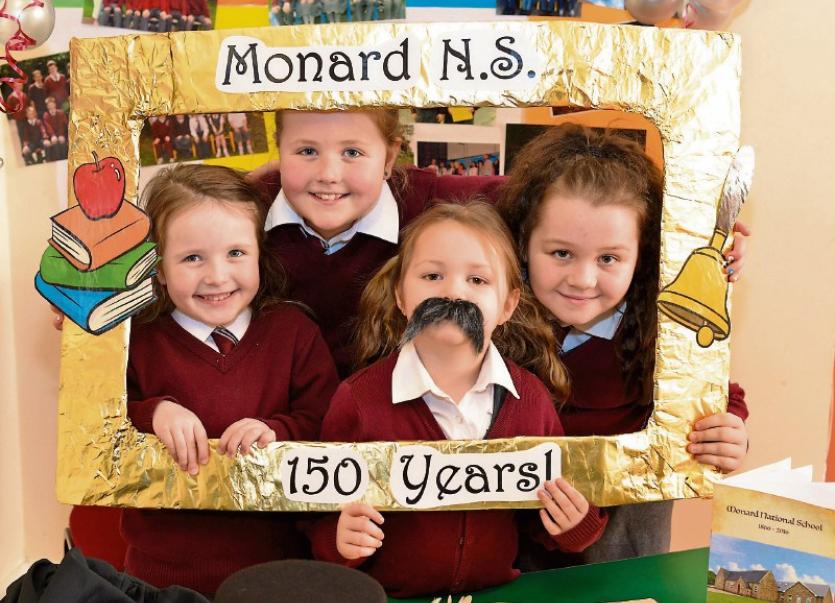 There were great celebrations at Monard National School as the teachers, former and present pupils and their families celebrated its 150th anniversary.

The school was built in 1866 when Ireland was still recovering from the Great Famine.

The population had fallen dramatically through death from hunger, disease and mass emigration and therefore the establishment of the school must have been a truly wonderful event for the people of Monard and Solohead. Lord Stanly of Derby Court, Ballykisteen, paid for the education of his tenants' children and introduced a bill to parliament that began the national school system in Ireland.

In 1866, as part of Lord Stanley’s extensive building programme, he organised and oversaw the construction of the two teacher residences in Monard and the new Monard N.S that is there today.

“When Monard N.S. opened its doors for the first time in 1866, Ireland was a very different place,” said Dan Finnan, Chairperson of the Board of Management.

“The human misery wrought from the Great Famine was still a vivid memory. Ireland is a very different country today, thanks in no small way to the contribution that schools like Monard made and continue to make, to the betterment of the lives of children and to the community in general.”

Retired Principal Caitriona O’Connor revealed the new plaque to mark the occasion before Deputy Principal Julie Duffy invited everyone inside to look at the many photographs of pupils and events on display and discover more about the history of the school.

Many former pupils turned up for the occasion, including 96 year old Kitty Withero who attended Monard N.S towards the end of the 1920s.

There was huge interest in the school’s old Roll Books and many people were delighted to find the names of their ancestors in the registers of yesteryear.

To touch and feel these old books and turn their pages truly transported you into the past.

Beautifully scripted handwriting, listing hundreds and hundreds of names, lifted from the pages calling you to imagine who were these pupils. What were their lives like, what kind of a life did they pursue and when they left?

"This is a wonderful day for the whole school community and we are delighted with the huge turnout,” said Deputy Principal Julie Duffy.

“All ages are present from our newest 4 year-old junior infant pupils to our most senior 96 year-old past pupil.

“Stories were shared and old friends were reunited during a lovely, warm, relaxed day.

“Our wonderful extension, so carefully designed to complement the beautiful 150 year-old original school, was admired by all. We felt honoured to be part of this special historic occasion for Monard NS."

The school looks forward to the next 150 years and welcoming incoming Principal Ms. Mary O’Dwyer.