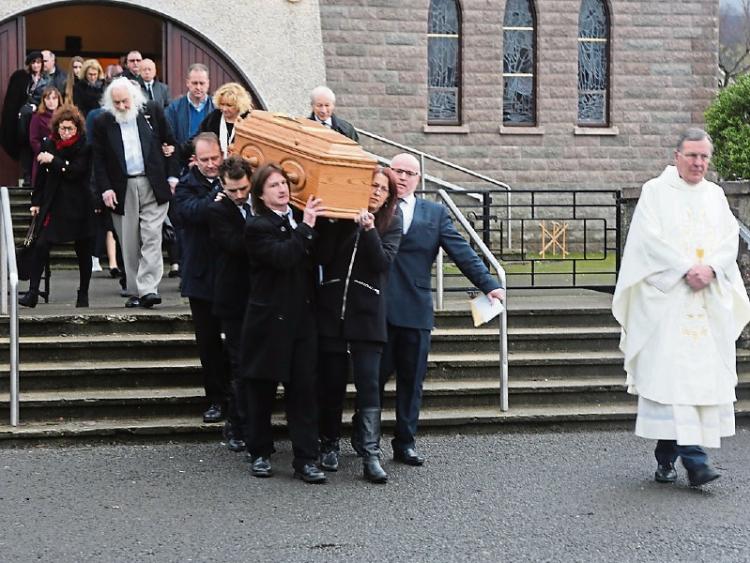 Hundreds of mourners packed into Our Lady of Lourdes Church in Silvermines last Sunday for the funeral of Therese McGowan who died on New Year's Day.

Mrs McGowan, 87, was pronounced dead after her car hit a wall near Ballintoher around 3pm. It is thought she may have had a heart attack before the accident.

Her funeral in Silvermines was led by her husband, Maurice; daughter Siobhan and her husband Anthony, and son Shane, the singer/songwriter with The Pogues, and his partner Victoria Mary Clarke.

In her tribute to her mother, Siobhan McGowan said that Therese was a “big character from a tiny hamlet.”

Mrs McGowan was born in Carney Commons outside Puckaun and lived there until she left with her husband in the 1950s for England. The couple returned some years ago to live in Silvermines.

Ms McGowan told the congregation that her mother was “strikingly beautiful and gregarious”.

She described her mother and father as the “best parents in the world”, who had encouraged in them a fierce sense of individuality and to question and think for themselves.

Saying Therese was “a woman of incredible grace”, Siobhan told mourners that everyone who knew her mother also spoke about her grace.

“Not just grace in movement and manner but true grace of the spirit - an open heart and great compassion and wisdom which she shared with us all the time,” she said. “All felt richer for having known her which is the mark of a life well lived,” said Ms McGowan.

Therese, who celebrated her 60th wedding anniversary only a few months back, died on the week after Shane celebrated his 59th birthday on Christmas Day.

Local parish priest Fr Brendan Moloney, who celebrated the Requiem Mass, said Therese, who won numberous awards for her singing, had inherited her skills and talents in music, song and dance from her ancestors.

While many said she could have made a go at being a professional singer, she had passed that international stardom to Shane and Siobhan, he said.

The singing at the Mass was performed by the nationally acclaimed local Silvermines Choir with music chosen by Shane.

Mrs McGowan was the first road tragedy victim of 2017.