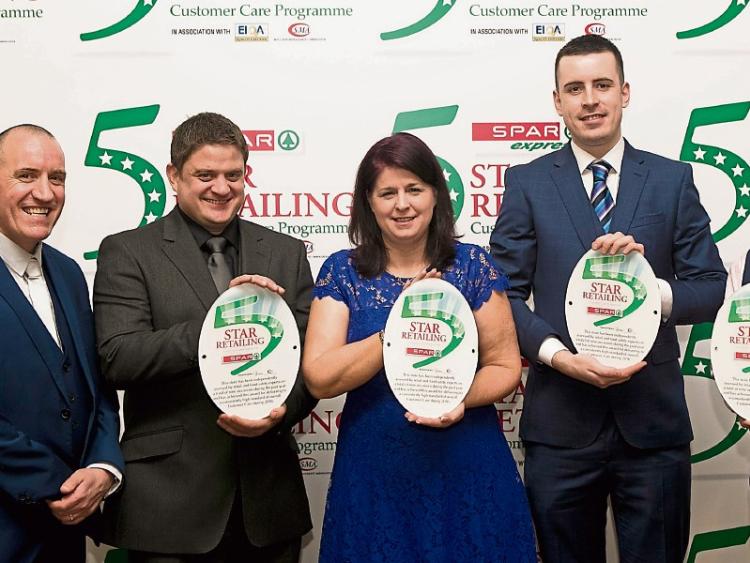 A Carrick-on-Suir store was one of five Tipperary Spar stores that were awarded one of retail’s highest honours at the annual Spar 5 Star Awards.

Heaphy’s Spar in John Street, Carrick received one of the awards presented to stores that demonstrated outstanding industry excellence following a year of comprehensive inspections, visits from mystery shoppers and audits.

Spar retailers from across Ireland attended the awards ceremony held at Killashee House, Co. Kildare and hosted by BWG Foods, owners and operators of the Spar brand in Ireland.

The awards were held in association with the Excellence Ireland Quality Association.

The winners excelled in all areas of inspection, displaying exemplary standards across their stores.

The other Tipperary stores among the 194 stores that received 5 Star Awards were Farrell’s, Ballina; Foley’s, Gortlandroe, Nenagh; Harvey’s, Thurles and Heaphy’s, Roscrea.

The Spar 5 Star Awards Scheme is one that retailers must be committed to all year round. Maintaining the highest standards in customer care and food safety consistently on a daily basis is no easy feat and these retailers work extremely hard in order to achieve this.

I’m delighted to see five Tipperary stores achieve the mark this year and get the recognition they deserve.”

The awards scheme is a rolling scheme where participants must undergo rigorous year-long assessments across a range of categories including customer care, shop presentation, food safety and retailing innovation.