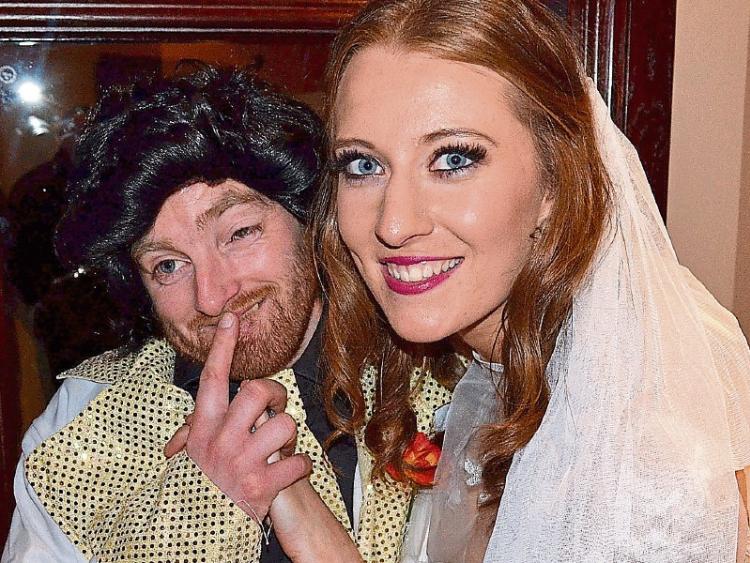 Hundreds flocked to witness a wedding with a difference at Carrick-on-Suir's Carraig Hotel  where a crazy jilted lover objected to the nuptials and a pregnant bridesmaid went into labour just after the happy couple said "I do".

Ryan Roche and Katie O'Hanlon were the hapless bride and groom caught up in the wedding from hell on Saturday night, February 11.

But it was all for a good cause - the Mayor of the Comeragh's campaign that is raising funds for the proposed Rathgormack/Clonea all-weather multi-games amenity ground.

Ryan from Clondonnell Rathgormack, is one of three candidates vying for the Mayor of the Comeraghs chains of office and his 1970s themed mock wedding was a huge fundraising success as well as priceless entertainment.

The Carraig Hotel's function room was packed to capacity for the mock wedding and Ryan reported that 360 tickets were sold for the event at €20-a-head. Ryan thanked all who helped him organise the event and everyone who supported it.

There is still a month to go in the mayoral race and Ryan's rivals Tony Bolger and Raymond Connolly and their committees are also hard at work fundraising.

A large crowd of young boys and girls enjoyed the Teddy Bear's Picnic event organised by the Tony Bolger mayoral campaign at the village's Community & Hiking Centre last Sunday, February 12. Children brought along their broken teddies to be mended by the teddy doctor and enjoyed a range of fun activites including face painting, play doh, biscuit decorating and story telling.

Over the coming weeks, Tony is  organising a coffee morning and cake sale in Rathgormack Community Centre after 10am Mass on Sunday, February 29, a fashion show in the Carraig Hotel on Friday, March 3 at 7.30pm and Health Check morning run by Mick Norris at Rathgormack Community Centre on Sunday, March 5 at 10am. He is also running a raffle with a weekend hotel break as the top prize.

Raymond Connolly, who got his mayoral campaign off to a flying start by organising a massive tractor parade before Christmas, is also running a raffle.  Tickets cost €20 and the top prize is €1000 cash, second prize is €500  and  3rd and 4th prizes is €200. The raffle draw takes place in Maudie Kennedy's Pub in Rathgormack on March 11.