Don't be another statistic on our roads say Gardai 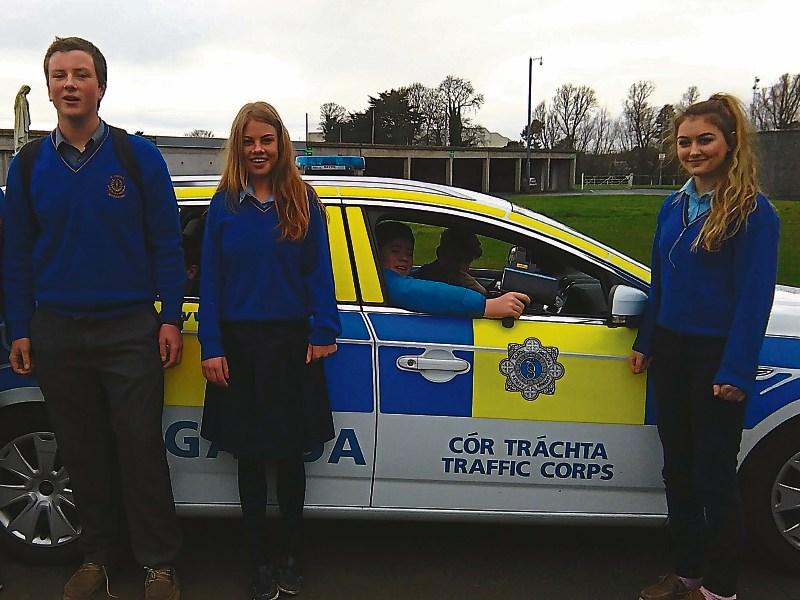 'Look around you, in 10 years statistics show  someone in this room will be a victim of a serious road collision - don't be another number'

This was the message given to students at the annual road safety day held at St. Patrick's Campus Thurles last week.

Since 2010, 61 people have died on Tipperary roads while another 90 have been involved in accidents which left them with life changing injuries, confined to a wheelchair, lost limbs or suffered sever brain injuries. Last year 187 people lost their lives in road accidents - 13 of those were  in Tipperary.

Since the Tipperary road safety programme began in 2010, over 1500 students have attended the annual seminar series which aims to educate drivers before they get behind the wheel of a car. This years event was organised by Garda Anastasia Murphy and  Garda Brian Leamy from  Thurles Traffic Corps who welcomed a further six schools to the inaugural road awareness day.

At the conference SER Region Traffic Supt Aidan Brennan made an impassioned appeal to the audience to stay safe on our roads.

“There isn't any single cause for the number of road deaths or accidents last year but statistics tell us that young people are more at risk and unfortunately there are proportionately more younger people killed in traffic accidents.”

“You put your own life and the lives of others at risk every day when you get behind the wheel of a car.  Figures show you are more likely to be killed in a traffic accident than winning the lotto. Everyone hopes they will win the lotto - nobody wants to be in an accident. Don't think that you are invincible. Be safe, be smart,” he said. 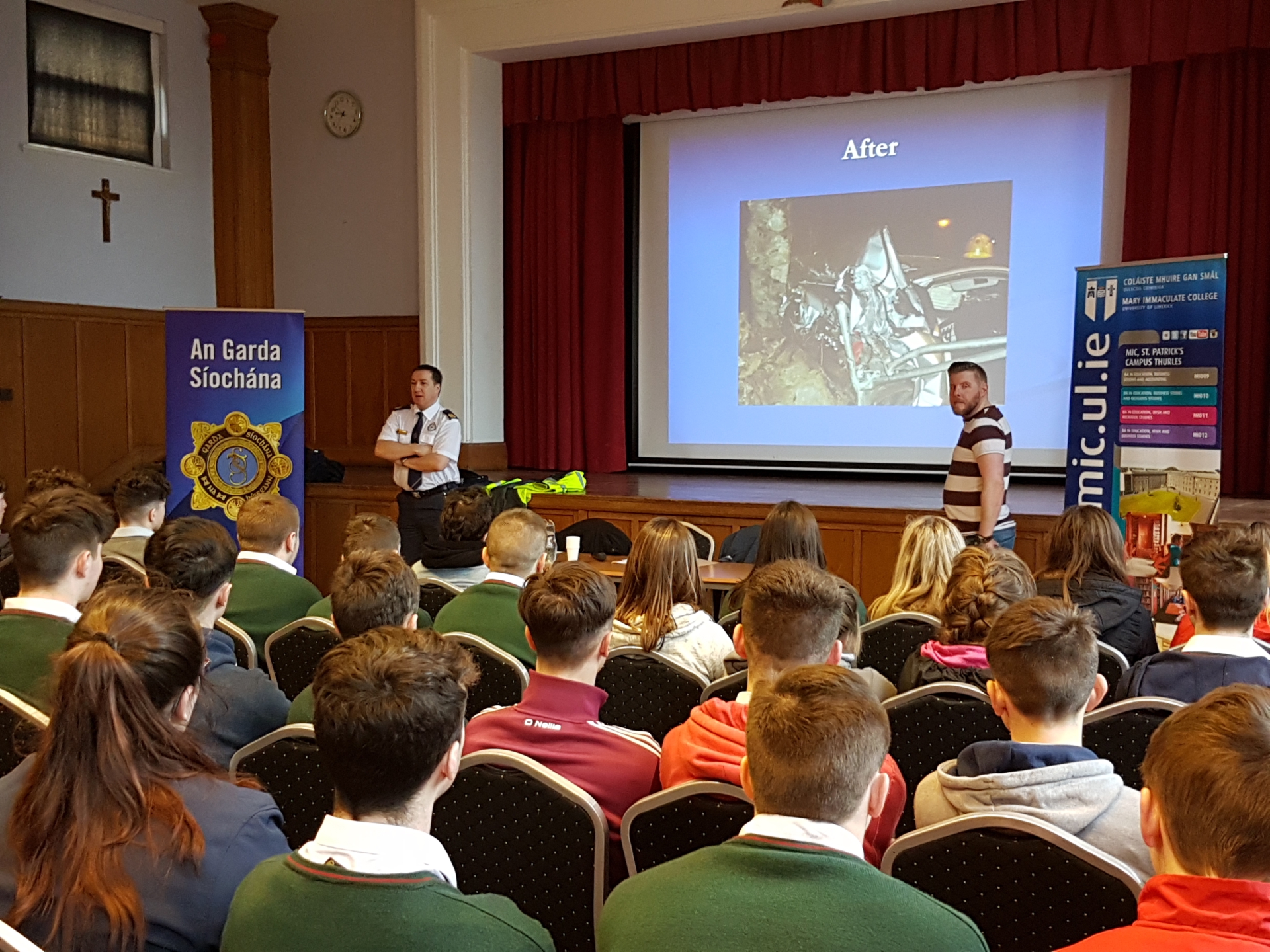 Barry Murphy recounts the events that led up to a serious injury collision which left him with horrific injuries in 2006 and his long road to recovery. He is accompanied by PJ Commins, the paramedic who tended to him at the scene

In 2006, 22 year old Barry Murphy was a back seat passenger in a single car collision which left him with life threatening injuries and in a coma for two months.

Barry and a friend, both of whom were wearing  seatbelts,  were travelling in the car of an acquaintance when the driver lost control and hit a wall.  They had only travelled half a mile when the rear of the car impacted with the wall at 100kmph,   wedging the vehicle  into the 3ft wide wall.

When first responders arrived at the scene they didn’t realise there were three passengers in the car. It would take almost 75 minutes to cut Barry out of the vehicle  in what doctors later explained to Barry is known as the ‘golden hour’ otherwise known as the time period when medical intervention can prevent death following a serious accident.

Barry would go on to spend eight weeks in a coma and when he woke up had no recollection of the accident, his family, memories of his childhood or his name. He would have to  learn to walk, talk, write feed and dress himself again.

“I was a child in a man’s body,” he  tells the crowd of 200 secondary school students in St. Pat's. Over the two day seminar not a whisper can he heard when Barry gets up to tell his story.

Among his injuries, Barry sustained 16 fractures to his arm, swelling of the brain, a shattered skull, broken jawbone, shattered cheekbone, ruptured bowel and underwent a tracheotomy while in hospital. He can no longer play any kind of contact sport.

“I have no memories of my life. I can’t remember 21 Christmas’s, birthdays.  From what I was told I was a happy go lucky lad.”

On the night of the accident Barry was rushed  to Cork University Hospital where his parents were told he had a 10 percent chance of survival.

“I could have been coming back in a box,” he says - again not a sound from the crowd.

Doctors operated immediately and found there was only space for a sheet of paper between Barry’s brain and skull due to the swelling - “if it swelled any more I’d be dead,” he says simply.

Amazingly Barry defied the odds and survived the night however he would go on to spend eight weeks in a coma. When he eventually woke up he had no recollection of his life before the accident.

After leaving hospital Barry went on to a rehab facility in Dun Laoighaire where he would spend almost four years learning to walk, talk, write, read, dress and feed himself and live independently once again.

Since then his recovery has been remarkable and  for the last seven years Barry has been a guest speaker at the Road Safety seminar series organised by urging students to think before they get behind the wheel of a car.

“Don't be afraid to tell someone slow down or cop on. In 0.25 of a second my life was changed forever. Be smart on the roads, please just slow down,” he said.

”It opened our eyes to the seriousness of road safety” 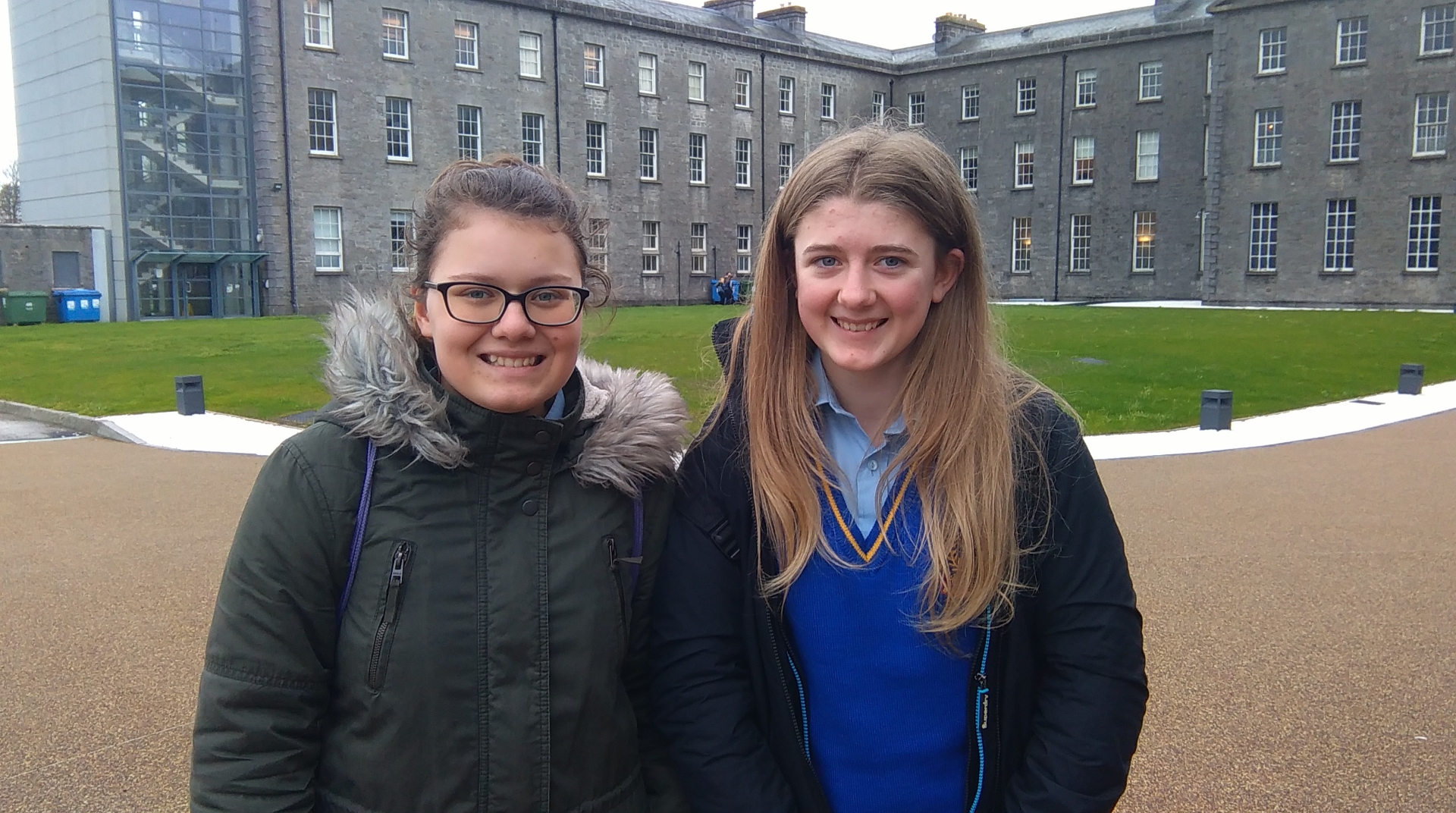 Last week six  schools from across Tipperary took part in the Road Safety Seminar in St Patricks college Thurles writes Liana Kelly. Over the course of the two days the students received talks from various speakers including a local paramedic and crash survivor, took part in multiple workshops and presentations  as well as taking part in a road traffic accident simulator organised by the RSA. The students said they found the talks very interesting and the topics raised very beneficial to them as young people,  saying it ' opened our eyes to the seriousness of road safety.' After listening to the information today the students were reminded of how important it is to be safe while using the roads and how one foolish decision could change their lives forever.