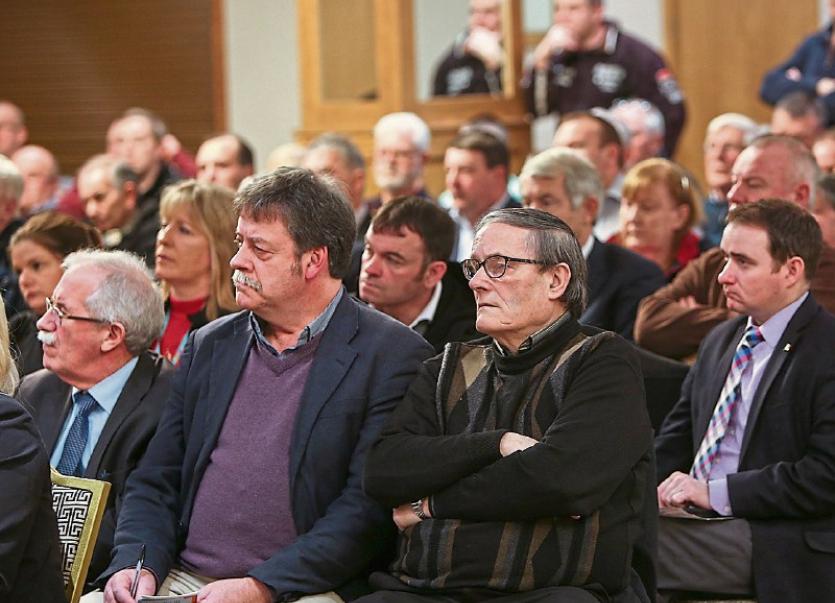 A section of the crowd at the public meeting.

A bus workers trade union leader appealed to Tipperary's TDs at a public meeting in Clonmel last night to use their political influence to secure a moratorium on Bus Éireann's plan to axe its Clonmel to Dublin express route services from March 12.

National Bus & Rail Union General Secretary Dermot O'Leary issued the call at the Save Our Bus Service public meeting in the Clonmel Park Hotel, which was attended by more than 100 people including four of Tipperary's five TDs, Tipperary Co. Council Chairperson Cllr Siobhan Ambrose and councillors from the Clonmel Borough and Carrick-on-Suir Municipal Districts.

Deputies Seamus Healy (Ind), Mattie McGrath (Ind), Michael Lowry (Ind) and Jackie Cahill (FF) along with Kilkenny Sinn Fein TD Kathleen Funchion all pledged to do what they could in the corridors of power in Leinster House to save the X7 route that operates about 8 services daily between Clonmel and Dublin.

Deputy Funchion proposed that the five TDs from Tipperary along with the TDs from Carlow/Kilkenny constituency join forces and raise the issue in the Dail with the sole aim of getting the bus route closure stopped. "Strength in numbers there would be difficult to ignore," she declared.

TDs from both constituencies are today (Friday) working to ensure they can raise the bus route closure during Topical Issues time in the Dail next Tuesday morning, March 7 and call for the moratorium.The Minister for Transport will have to respond to them if the matter is raised under Topical Issues.

The public meeting took place against the backdrop of an impending strike by Bus Éireann staff due to start on Monday over cut backs the firm wants to impose to staff wages and conditions along with cut backs in bus services.

Anger and frustration was voiced by bus users, Bus Éireann drivers, NBRU leaders and local politicians at the meeting over the announcement earlier this week that the Clonmel/Dublin bus service is to close from March 12. The closure was denounced by several speakers as another as another attack on rural Ireland's infrastructure and services.

The meeting heard how the Clonmel/Dublin service was used by residents of Carrick-on-Suir's Camphill Community to travel to Camphill in Callan daily and was also vital for cancer patients and other sick people, without private transport, for travelling to hospital appointments in Dublin.

Read full report on the public meeting and update on the campaign to stop the axing of the Bus Éireann Clonmel/Dublin route in The Nationalist out next Wednesday, March 8.