Home at Moyaliffe is totally destroyed by fire 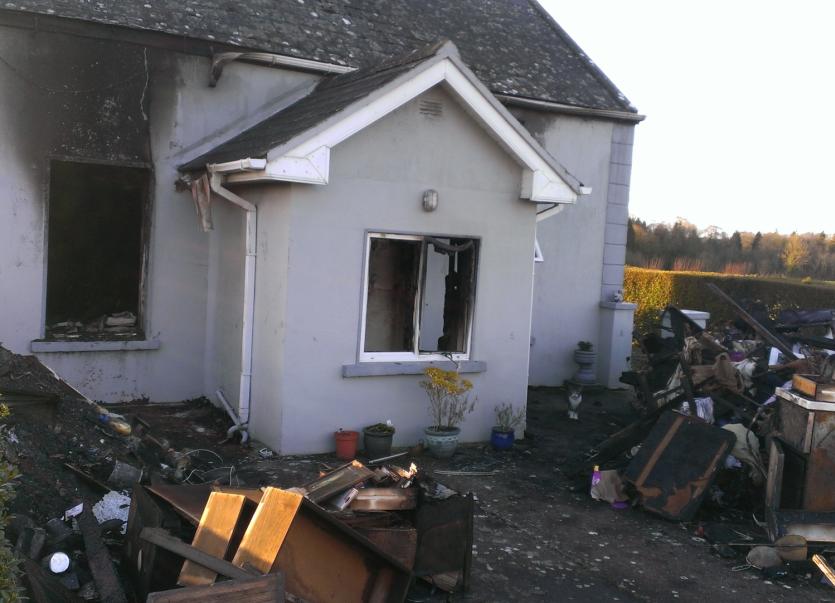 Mary Gleesons home at Moyaliffe which was gutted by fire at the weekend.

A 93 year old lady, living on her own at Moyaliffe, Ballycahill - ten miles outside Thurles town - was rescued by her neighbour after she raised the alarm at the weekend having spotted smoke close to her TV set.

A 93 year old Holycross Ballycahill lady is today recovering from shock after her home at Moyaliffe was completely destroyed by fire, just moments before she had been rescued by her neighbour.

Mary Gleeson rang the number of her neighbour Declan Ryan when she spotted smoke coming from behind her television and within minutes her cottage was completely engulfed with flames - just moments after she had been rescued by Declan who came to her aid immediately.

The neat cottage on the quiet road - very close to historic Moyaliffe House -  could have been the scene of an awful tragedy had it not been for the quick action of Declan Ryan and the eagle eye of Mary Gleeson.

An explosion occurred just seconds after they had left the building and it took units of the fire and emergency services from Templemore and Thurles to bring the inferno under control - they worked for some time into the night making the area safe.

The cottage, which enjoys picturesque views of the hills of Rossmore and Drombane on one side and the flooded fields looking off towards Holycross on the other, was just beginning to show signs of spring with daffodils starting to bloom and the neat hedges en-greened. However, the house itself - home to spinster Mary - is now gutted and inhabitable. Mary is being comforted by nieces and nephews and is currently residing with neighbours.

"She is still in shock. This was her family home for generations and it is a very tough blow to her. But, it could have been much worse and we are just delighted that she is safe and well," said Declan Ryan who is being hailed a hero for their efforts on the night.