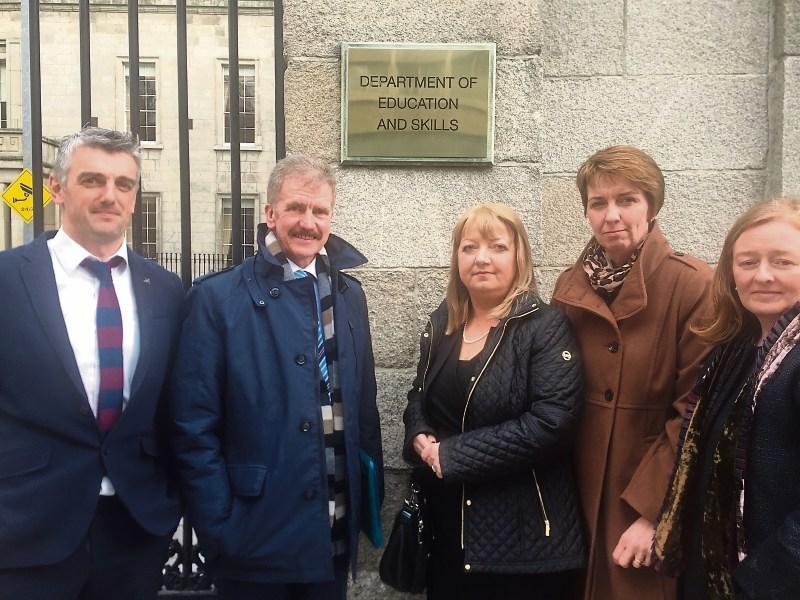 Tipperary school principals have said they are 'outraged' by a Department of Education  snub to their appeal for extra resources to cater for deprived pupils.

They  met officials for a three hour meeting in Dublin on Tuesday and one furious principal said after - “We went in with nothing and we came out with nothing'.

The five  Tipperary town primary schools  located in an area with alarming levels of deprivation will not be included in a  Department of Education programme designed to tackle social disadvantage.

A last ditch bid for inclusion failed on Tuesday afternoon when the principals from the five schools, which serves 713 pupils, were told by Department of Education officials  that the Tipperary town schools would not be included in the DEIS 2017 programme.

Tipperary town has a minus twelve deprivation index measurement whereas one school in Galway city, granted DEIS status,  had just a plus one deprivation level .

The  principals travelled to Dublin with some hope of being included in the programme which gave DEIS status to 79 additional schools last month as concerns had been raised about the reliability of the Department’s new system for measuring advantage.

Hopes were dashed however when their bid for inclusion was shot down by Department officials.

Said Louise Tobin, principal of St. Joseph’s primary school - “We are outraged.  We went in with nothing and came out with nothing.Tipp town has exactly the same deprivation level of minus twelve  as Carrick-on-Suir which was granted DEIS status last month.

“Schools in other parts of the country granted DEIS status had lower averages than that, our levels of deprivation were greater” .

Principal of Monastery CBS Pat O’Halloran said they were devastated to be shot down after making such a powerful case for inclusion.

“It is a disgraceful decision.  We have been given no hope,” he said.

The   principals of  St.Michael’s Junior Boys and Girls Schools, Monastery BNS, Gaelscoil Tiobraid Arann and St. Joseph’s met with  officials with concerns mounting regarding the reliability of the Department’s new system  for measuring disadvantage.

“We are talking about the lives of all of the little children in Tipperary town, coming from disadvantaged homes who deserve a better chance; who deserve DEIS, delivering equality in schools”, said Louise Tobin,  who  has questioned the reliability of the Department of Education's new system for measuring disadvantaged schools.

Last week the Department of Education said it had revised the designation of  a number of schools that were awarded DEIS last month.Two schools have now been recategorised from urban,which attracts extra funding,  to rural.

The Department has changed the categorisation of a number of schools on its new DEIS list and has  changed the methodology it is using and will write to schools requesting the eircodes of pupils so that it can further refine its assessment of their economic backgrounds.

The Department stated that  while some schools had expressed disappointment at not being included in DEIS on this occasion, none of those schools had higher levels of disadvantage than the 79 that were recently added to the scheme.

It said classification of primary schools as either urban or rural related to resource allocation and not to eligibility for DEIS.

It said it hopes to "run the whole process again" in July when it has up-to-date data on pupils from schools, as well as new census data.

The Department of Education said it was using the electoral district the pupil came from to assess levels of disadvantage and urban or rural status.

It said it will now use settlement areas which is a smaller more precise measure.

Louise Tobin said her school serves a disadvantaged community and was confident it would feature on the urban DEIS list announced in February but it was not.

“The decision beggars belief. We were devastated. It was a shock, horror and everybody felt so let down because our statistics speak for themselves,” she said.

"Surely, the department, no more than anybody else in the public sector, is working at planning properly, delivering properly and not making mistakes. I mean, we are talking about the lives of all of the little children who deserve a better chance; who deserve DEIS, delivering equality in schools," said Ms Tobin.

Independent TD Mattie McGrath has called on the Minister for Education Richard Bruton to review the criteria under which the  Tipperary schools were excluded from participation in the DEIS 2017 plan.

Deputy McGrath said the model was not fair or objective. “In fact it is bordering on the shambolic given the importance of the outcomes concerned,” concluded Deputy McGrath.