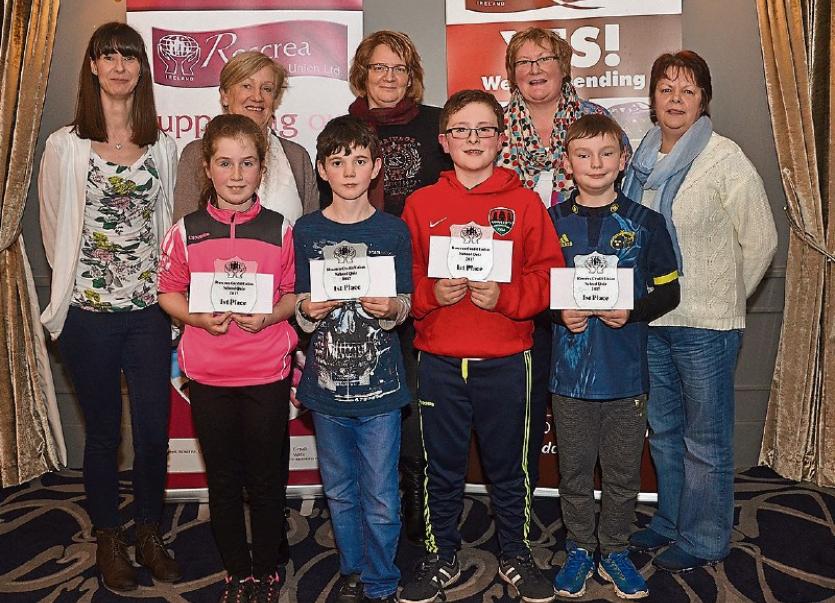 Once again the quiz attracted a massive turnout with teams from Roscrea and its neighbouring parishes and villages all taking part.

The competition was broken into two categories A & B representing two different age groups. The woman in the hot seat posing the questions was Mai Phelan and the eventual winners of the two categories came from Clonlisk National School. Both teams can be very proud of their achievements.

All winners including the runners up were rewarded with assorted trophies to commemorate their achievements as well as Credit Union vouchers.

Roscrea Credit Union would like to express its sincere thanks to all the Credit Union staff and directors who sacrificed their Friday evening to lend their assistance to such an important occasion on the Credit Union calendar. Thanks to Louis Cooley and Ena McMahon who had the most difficult job of keeping the scores. Thanks to, Rosaleen Ryan, Marie Carroll, Jim Bolger, Ilze, Siobhan Moloney and both Liam and Mai Phelan without whose assistance the quiz would not be possible. Thanking all the presents, teachers and students who participated in the quiz, Brian King Manager of the credit union encouraged everyone to keep supporting their local credit union. Brian said that the credit union offers competitive rates on it’s loans and now offers free financial advice through full time financial advisor Ger Slattery.

The Credit Unions quiz is unique in that over 20,000 children under the age of thirteen, representing 32 counties and over 300 Credit Union's nationwide take part. This is the 26th successive year that the Irish League of Credit Unions has run the quiz, which continues to grow in strength and popularity each year. The quiz is also unique in that Credit Unions from all 32 counties on the Island, participate, making the Credit Union Annual Schools Quiz a truly nationwide event. The winners of the local quiz go on to represent Roscrea at Chapter Level in the regional finals, and the winners and runners up of both categories at that stage progress even further to the national final to be held on the 2nd of April.

The National Finals as one would expect are very competitive and each year over one hundred teams compete for All-Ireland glory. Prizes at National Level are quiet substantial with the winning school receiving a cash grant in addition to participants receiving certificates and prizes.