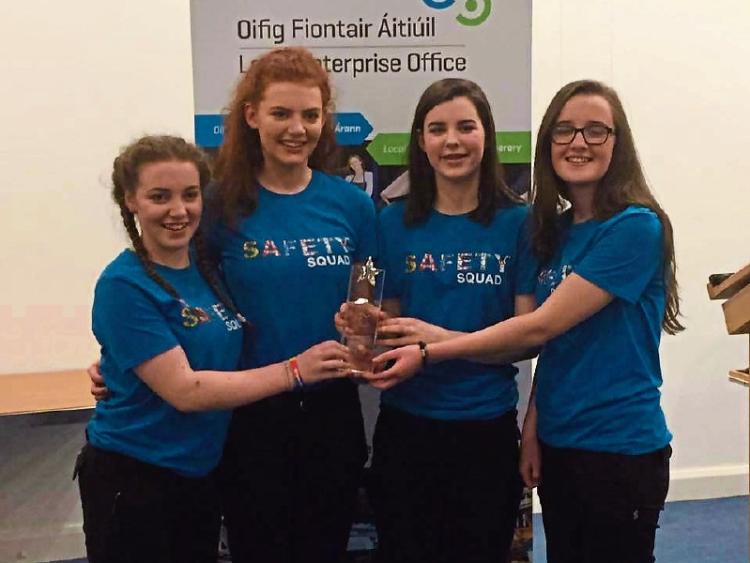 Cheers rang out in the lecture hall of  LIT Thurles on Friday as over 200 secondary school students from Tipperary stood in bated breath to hear the county winners of the Student Enterprise competition for 2017 announced.

The worthy winners of the senior category were the determined girls from St. Mary's Nenagh who impressed the judging panel with their children's activity book 'The Safety Squad'.

To date the mini company team have sold over 500 copies of the book and have also been approached by text book publishers Edco such is the popularity of the book.

Managing director of the company Ciara Grace says the team identified a gap in the market for a safety awareness book aimed at young children  with the girls relying on their own agricultural backgrounds  and family members for advice. After months of research and trials, the book was ready to hit the shelves with an official launch night at the Abbey Court Hotel earlier this month.

The book is broken into  four different sections: fire, water, farm and road safety, with each team member taking charge of one section. The girls created several characters, placing them in a different scenarios and telling a story around it using simple, easy to understand language. The book also featured fun activities such as crosswords, colouring pages and quizzes as well as a certificate of completion once each chapter is finished.

A percentage from the sale of each book is also being donated to Temple Street  after two members of the team had loved ones cared for at the hospital.

Ella's three year old cousin Ronan Kennedy, whom the book is also dedicated to,  sadly passed away in 2015 following an accident at a swimming pool in Co. Cork  while Marie's brother also suffered an injury and was cared for by the staff at the children's hospital.

However the future  'best sellers'  won't be resting on their laurels any time soon as they plan to head straight back to Safety Squad HQ to continue working on their project for the national final.

“We'll try and think up ways of pushing the project forward but we're just enjoying the whole experience so far,” says Marie.

The Safety Squad Activity Book is available to buy for €8. You can contact the Safety Squad through their Facebook page www.facebook.com/thesafetysquadstmarys or by emailing Ciara Grace at ciara.gracestmarys@gmail.com