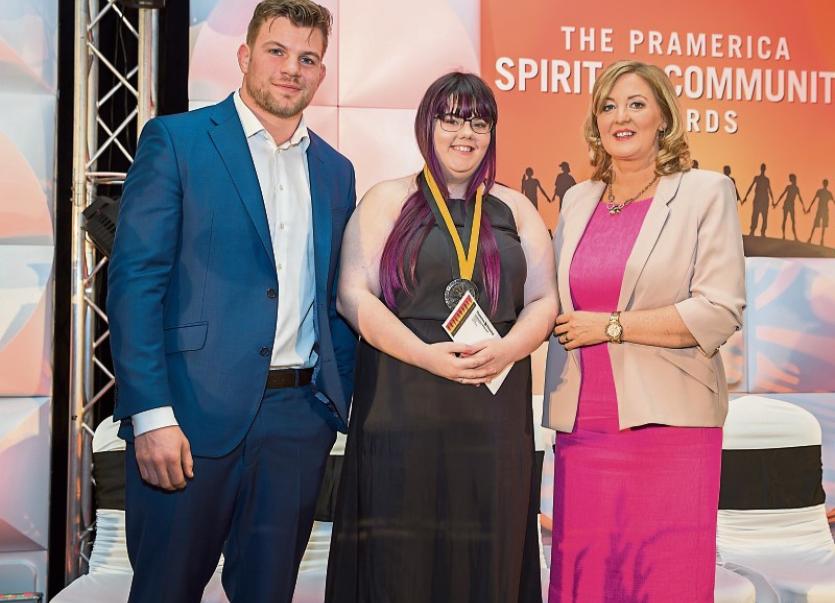 Comeragh College student Ashling Dunphy, who came to the aid of victims of Carrick-on-Suir's worst flooding in decades, was honoured with a highly commended award in the junior category of the 2017 Pramerica Spirit of Community Awards last week.

Irish international rugby player Jordi Murphy presented the 4th year student from Ballyneale with a silver medallion and €500 cash prize at a gala dinner in the Crowne Plaza Hotel in Dublin.

The Pramerica Spirit of Community Awards programme recognises young people for their motivation, service and impact on their local community and is the only all-Ireland youth awards initiative.

Ashling was selected as one of the award's finalists from among hundreds of youth volunteers from across the island of Ireland.

Ashling's, motivation for volunteering first came from the negative profile of young people in her town and to alter stereotypes with which young people are often associated.

In late December 2015, Ashling’s town was devastated by Storm Frank and the footage of local families being evacuated from their homes inspired her to help the clean-up operation, and to assist those whose homes had been damaged to start putting their lives back together.

Ashling’s initiative started with a post on Facebook and grew to a fully-fledged operation with her leading a team of 11 young people helping people, whose home were flooded.

See this week’s edition of The Nationalist for full story.

Flooding in Carrick on Suir...

Work on new flood relief plan for Carrick on Suir

Council investigates cause of worst Carrick flooding in decades