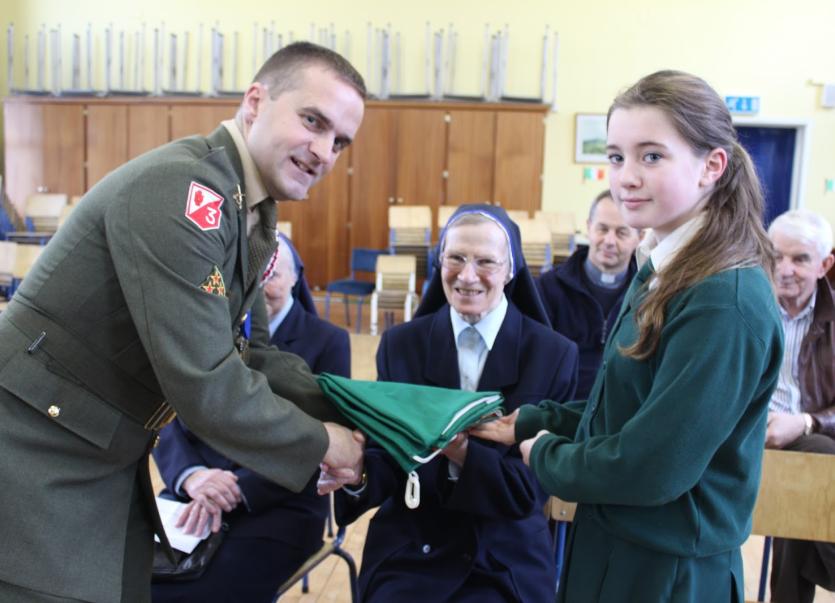 Sr Xavier O'Dwyer (85) was conveyed to her final resting place in the Ursuline Convent this afternoon as pupils of Scoil Angela lined the streets of Thurles.

Eighty five year old Sr Xavier O'Dwyer, former Principal of Scoil Angela, Ursuline Primary School in Thurles was laid to rest this afternoon with the Cathedral Town coming to a standstill as she was conveyed through Liberty Square.

in her forty years in Scoil Angela - 29 of those as Principal - she touched the lives of so many children, scores of whom returned to Thurles on a beautiful bright day to pay their respects and say a final farewell today to a lady who was close to nature and would have appreciated the solemnity of the Requiem Mass and the touch of spring in the air,

The Cathedral of the Assumption reverberated to the glorious strains of the Ursuline Secondary School and Scoil Angela choirs as the congregation listened to Chief Celebrant Fr Roy Donovan speak about the kind, caring, gentle woman who had give so much in her life to anyone with whom she was associated.

Indeed, the Responsorial Psalm - 'Gentle woman, quiet light, Morning star so strong and bright. Gentle Mother, peaceful dove, teach us wisdom, teach us love'  - seemed utterly appropriate for a lady who devoted her life to people, the Ursuline community and the God she strived to serve each and every day of her life.

Many tributes have been paid to Sr Xavier since word of her passing became known. Perhaps the words of one past pupil best summed up the general mood. "She was a second mother to us all. She cared for us, looked after us, educated us, and when we left her school, she still cared for us and asked after us. It was  a pleasure to meet her in later life and her smiling face was always so welcoming."

Sr Xavier, a lifelong member of the Thurles St Josephs Conference of the St Vincent de Paul Society, was accorded a Guard of Honour by members as her remains left the Cathedral of the Assumption en-route to her final resting place.

A lady who never stopped giving in her life, in death she received the finest of farewells as she journeyed to the Heavenly home well earned during her toil amongst us.