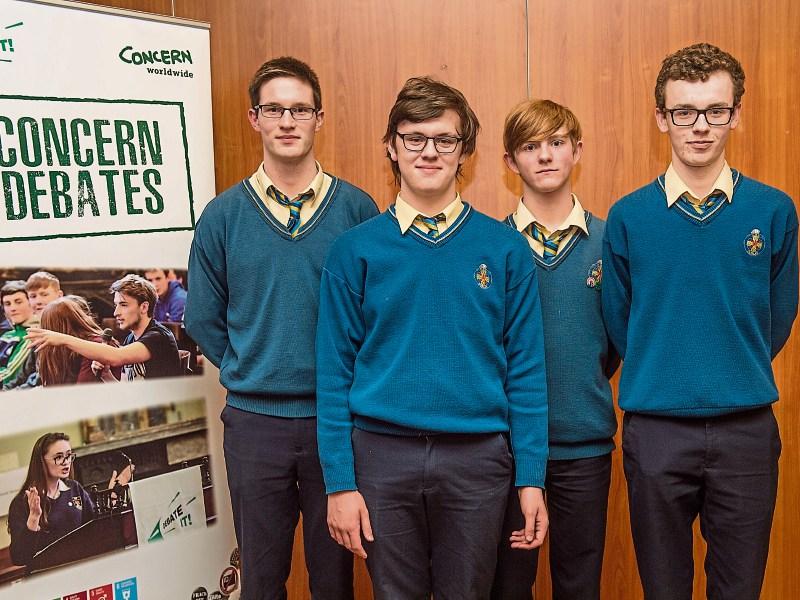 Word-warriors from one Tipperary secondary school confirmed the county’s place as one of the top debating counties in Ireland at the All-Ireland finals of the Concern Debates contest.

A four-man team from CBS Thurles were praised after reaching the semi-final of Ireland’s largest debating contest run by aid agency Concern Worldwide – where they argued the pros and cons of torture.

The secondary school debating team - captain Harry Hogan (18), from Moyne; Kyle English (15) from Ballycahill; Brendan Atkins (16) from Upperchurch and Mark Fortune (18) from Holycross – were proposing the motion that ‘torture is a just means of preventing terrorism’ in the Concern Debates contest.

The school made it to the last four out of the over 150 schools that took part this year and had hoped to reach the final of the 33-year-old competition for the first time since 2008.

However, they were defeated by Sacred Heart Secondary School from Clonakilty, Cork, who opposed the motion, last Thursday [April 6] at The Talbot Stillorgan Hotel, Dublin in front of a large audience.

Concern Worldwide’s Head of Active Citizenship, Michael Doorly, who leads the team that organises the annual championship, said: “CBS Thurles are to be praised for their incredible skill and dedication in the debate and for the schools many years of participation in the competition.

“All four semi-finalist teams debated a difficult topic with sensitivity, intelligence, clarity and even a touch of humour in that one team quoted Jack Nicholson’s character in the film A Few Good Men when he says, ‘You can’t handle the truth.’”

Thurles CBS teacher and debates team mentor, Shane Hartnett, said: “Involvement in the debates helps to raise awareness about important issues among those who compete, as well as those that attend the debates.

“The pupils who compete learn valuable skills such as how to research, analyse and of course, how to speak in public with confidence.

“We believe that participation in the debates equips our students with these valuable life skills as well as, hopefully, encouraging them to become better citizens, both on a national and global basis.”

The other teams in the semi-final were Rathmore Grammar School, Finaghy, Belfast, who also proposed the motion and lost to St Mary’s CBS, Co. Carlow – who will face Sacred Heart, Clonakilty in the final at The Helix, DCU, Dublin at 7pm on Thursday, May 4.

The winning team will be invited to see one of Concern’s overseas projects, which saw last year’s winning team, Cross and Passion from Co. Antrim, travel to Malawi in south-east Africa.

Participants are given a topical motion two weeks before each debate and one side opposes while the other proposes, even if they disagree with the statement.