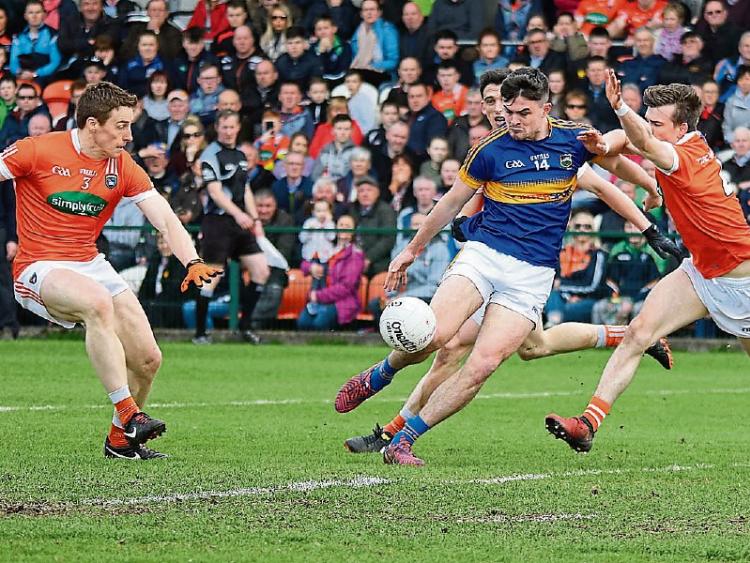 Michael Quinlivan is South GAA Tipperary Footballer of the Year

Michael’s career has been on an upward curve since, starring in the historic Minor All-Ireland win in 2011, adding Sigerson Cup success with UCC in 2014, and National League Division 3 honours last weekend.

Following on from County and Munster success in 2015, he lit up last year’s South Championship, claiming a third Senior Divisional title, and his spectacular winning free, from all of 60 yards in the semi-final against Moyle Rovers, is sure to become part of Tipperary GAA folklore for many years to come.

Much was made last year of Kevin’s undoubted hurling capabilities when he deservedly collected the Intermediate-Junior Footballer of the Year accolade. This year sees him back in the winners’ enclosure, becoming the sixth Mullinahone man to claim the Senior Hurling Award.

Kevin’s transition from forward to defender several years ago has made him one of the most consistent performers in the South Championship, with his familiar, intelligent sweeping style, providing a launch pad for his attackers upfield. His

A five-time South Senior Winner (2009, 11,12, 14 and 16), he lifted the Ryan Cup, as vice-captain, following a man of the match performance in last year’s final against Killenaule, and will again captain Mullinahone in this year’s championship. Kevin also holds a County U21 b medal from 2008.

John Lyons had long been hailed as one of the top juvenile footballers in the Division before coming to prominence at minor and under 21 level in recent years.  A very dedicated player, John has represented Tipperary at U14, U 15 and U16 levels, and tasted Inter-Divisional success in the 2014 Garda Cup, taking County and Provincial honours.

A County Minor Football panellist in 2015 and again last year, while also being on the cusp of the County Minor hurling panel, John’s career is progressing all the time, and he played a huge role his club capturing the Minor B hurling South Championship in 2015, which was followed by success in last year’s U21 B Hurling Championship. John was also a part of Declan Browne’s U21 Football panel that lost out narrowly to Limerick last month.

All Ireland final day last year witnessed the highest number of winning medallists from South Tipperary ever, and among them was Killenaule’s ever reliable Killian O’Dwyer, who was consistency personified throughout The Premier County’s Munster and All-Ireland Minor campaigns.

A Dr. Harty Cup winner in 2015, with Thurles CBS, Killian captained his school in this year’s Munster Senior Colleges Championship from the centre-back position, who were unlucky to lose out to eventual winners Our Ladys, Templemore.  A South Senior Hurling title and County U21 'B' championship were also claimed in 2015, and his display against St. Mary’s in last year’s South Minor Hurling Final victory was surely one of the performances of the year, helping in no small way to bring the Ahearn Cup back to Killenaule for the first time in fifteen years.

Now in the twilight of his career, Cian Maher was an integral part, not least as captain, in returning Fethard to Senior Football ranks last year. A County SF winner, while still under 21 in 2000, launched an Inter-County career the following year, with Cian involved in the Munster U21 Football Championship.

An ever-present on the Tipperary Senior Football panel between 2004-2008, Cian was part of Tipperary’s historic Tommy Murphy Cup triumph in Croke Park in 2005, has represented Tipperary in Intermediate Hurling (2009), and was the Tipperary Club in New York player of the year in their championship winning year in 2014.

Lee Mackey’s great service to Carrick Davins garnered just reward last Autumn with victory in the South Intermediate Hurling final. Between the years 2006-2011, Lee has been involved in Senior, Intermediate, U21 and Minor Hurling panels with Tipperary, captaining the Intermediates in 2010.

One of the top defenders on the club scene for almost a decade, Lee won a South Minor B Championship in 2005, was instrumental in Davins’ County Intermediate Hurling win in 2009, and has a Christy Ring Cup medal with London from 2012.

Player of the Past Football 2016: Michael O’Connell (Clonmel Commercials)

A corner back colossus on the glorious Commercials side that swept all before them in the 60’s, Mick O’Connell has left an indelible mark on the GAA in the South Division. As part of the Glorious three-in- a row side (1965,66,67), Mick’s name is enshrined in the history of the Commercials club, which currently honours him as one of its Vice-Presidents.

A formidable duel player, Mick also captured two South Senior Hurling medals 1964 and '70 with Marlfield, and had the honour of captaining the County final winning Commercials side of 1971, to add to another County Senior success two years earlier.

Mick represented Tipperary in Junior Football in 1966 and again in 1971, his son Mark is a Young and Senior Footballer of Year winner from 1981 and 86 respectively, and Mick now deservedly takes his place in the South Board’s Hall of Fame.

Player of the Past Hurling 2016: Jackie Walsh (Carrick Davins)

Jackie Walsh was a vital and indispensable component of easily the most successful hurling side ever to grace the fields of South Tipperary, Carrick Davins 1965-1979. Jackie’s amazing haul includes no fewer than eleven South Titles, unprecedented consecutive Co. Senior Hurling titles (66-67), and a Munster Senior Club success in 1967.

A defeat to Thurles Sarsfields in the 1965 final denied Jackie and Davins a three in a row in an era when Tipperary laid claim to be the greatest of all time. Adept in any line of the field, it was in the half back line and centre field where he excelled the most.

Inter-County success came his way also, with Jackie claiming Munster and All-Ireland U21 medals with Tipperary in 1967, having also been selected in 66 & 68. Jackie was also part of the Tipperary minor football panel in 1963-64.