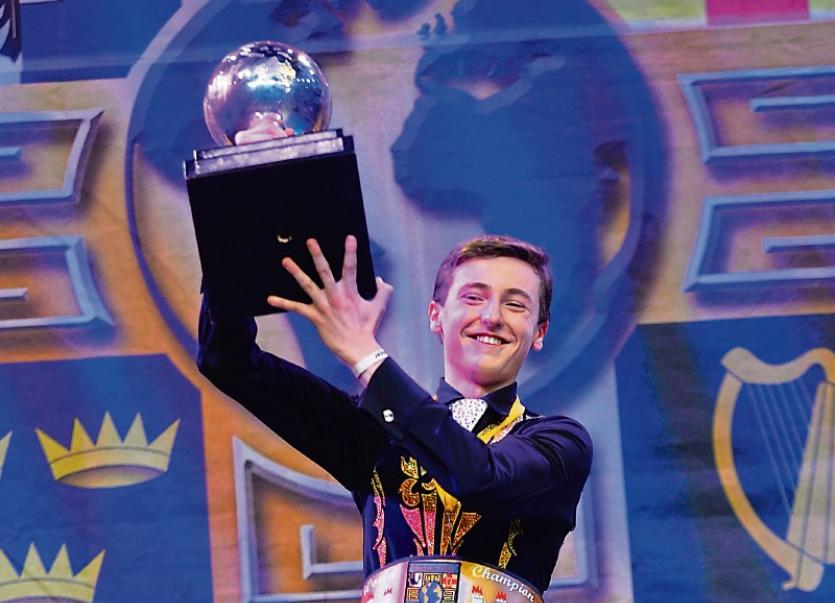 David Pyke raises the trophy aloft when he was crowned World U-14 Irish step dancing champion at the Citywest Hotel in Dublin.

It was a case of fourth time lucky for a Clonmel teenager when he won the World Irish step dancing championship.

David Pyke was crowned the World U-14 champion at the event held at the Citywest Hotel in Dublin earlier this month, when he was judged the best dancer among 54 other competitors who came from the United States, Australia, Europe and Ireland.

He finally got over the line having been in the shake-up on three previous occasions - he was third in his first world championship in 2014 and was runner-up the following two years when the event was held in Montreal and Glasgow.

The son of Linda and Michael Pyke (jnr.) from Albert Street, David has been on a great run in the last year. He won the British national championship in Manchester last July and followed that success by winning the All-Ireland championship in Belfast in October, a second successive Munster title in November and a third All-Scotland title in-a-row in Glasgow last February.

"David has really gained momentum and all the success is a reward for his dedication and hard work" , says Linda.

David, who turns 14 next week,practices with the Michael Ryan School of Irish Dancing up to five nights a week and takes part in competitions most weekends. He also does regular exercises for his posture and hamstrings.

Next on the list are the Irish Nationals - one of the few titles he hasn't won - which will be held at the Citywest in Dublin in June.

He first showed an interest in Irish dancing when he was four years of age in St. Mary's Montessori school and continued throughout his primary school years at St. Mary's, competing in his first championship at the age of seven.