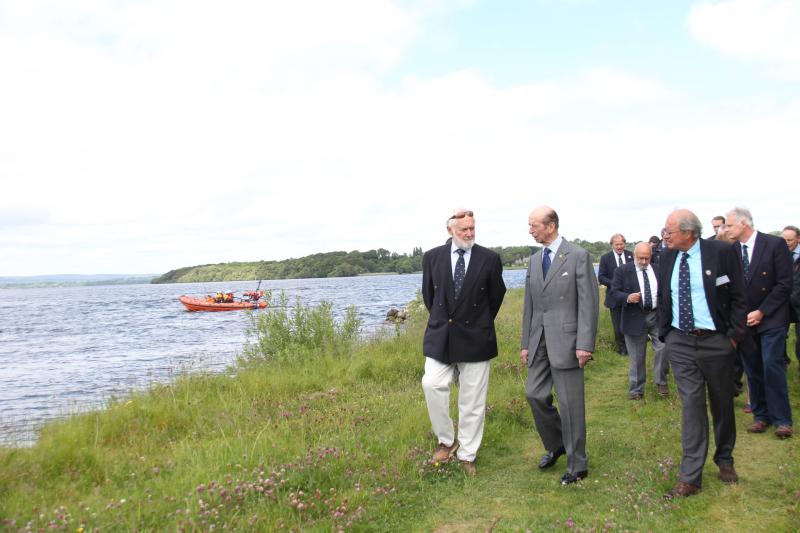 There was tight security around the tiny lakeside village of Dromineer on Lough Derg this lunchtime as Prince Edward, the Duke of Kent, paid a visit to the RNLI station based in the grounds of Lough Derg Yacht Club.

The Duke, who is a cousin of Britain's Queen Elizabeth, made the visit in his capacity as president of the RNLI.

He was due to arrive by helicopter at around 1pm and remain in Dromineer until around 2.30pm, having lunch with locals and members of the RNLI and yacht club in the clubhouse facility.

The local RNLI is hoping that the high-profile visit will boost its case for a new headquarters as, at, present, it is working out of two Portacabins in the yacht club grounds.

During his brief visit, he was entertained by musicians and Irish dancers, led by local Comhaltas member Ned Kelly. Lough Derg lifeboat helm and internationally-recognised poet Eleanor Hooker read one of her poems at the gathering.

The visit had remained a much-guarded secret due to security concerns, with many locals only discovering they had a royal visitor hours before his helicopter touched down in a local field. Among those he met were former An Taisce chairman Charles Stanley-Smith, current chair of Tipperary LCDC, and local boatyard operator Teddy Knight, whose boat, the Ku-ee-tu, was once a tender to the QE2 ocean liner.

Lough Derg RNLI station was the first inland station to be established in Ireland when it became operational in May 2004, and only the third ever to be set up by the voluntary group. It is one of the busiest stations in Ireland or the UK, covering an area from Portumna to Killaloe.