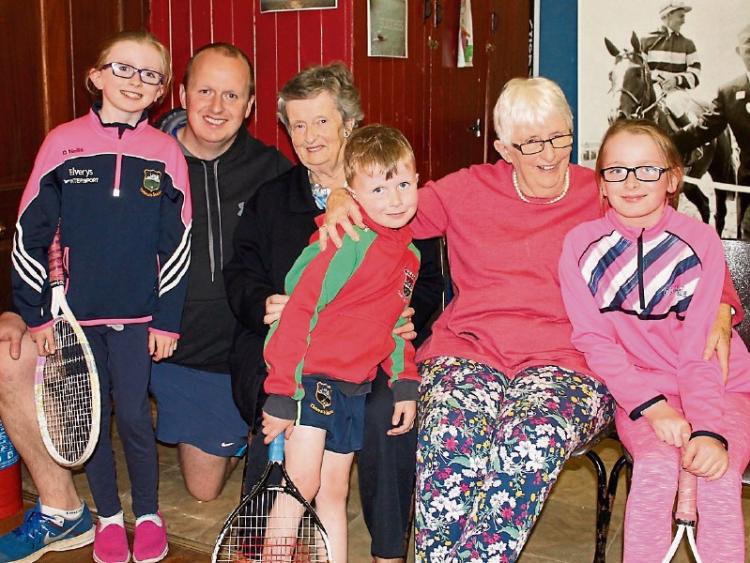 Larkspur Park hosted The Gathering weekend recently and as part of the event the 50th anniversary of Larkspur Park was celebrated.

Visitors on the night included original members of the Larkspur Park Development Committee. Margo Fogarty, Chairperson of the tennis committee welcomed everyone and called on Seamus King, Chairperson of Larkspur Park Development Committee to speak. Seamus outlined the history of the racehorse, Larkspur and how he gave his name to Larkspur Park. Larkspur, a chestnut stallion, was bought as a yearling by Vincent O’Brien in 1960 for later-to-be American Ambassador to Ireland, Raymond Guest. The price was 12,200 guineas. The horse wasn’t very successful as a 2-year old.

He didn’t promise much as a 3-year old either and started the 1962 Epsom Derby at 22/1 in a field of twenty-six horses. He was Vincent O’Brien’s second string.

An accident half-way through the race resulted in seven horses, including the favourite, Hethersett, either falling or being brought down. One horse was killed and four jockeys ended up in hospital. Larkspur had a narrow escape and took the lead two furlongs out and stayed in front to win by two lengths with Australian jockey, Neville Sellwood, on board. In their book, A Century of Champions, John Randall and Tony Morris rated Larkspur a ‘poor’ Derby winner.

Larkspur stood as a stallion for three seasons before being exported to Japan in 1967. His progeny made little impact in the racing world in either country.

At the time of the sale of Larkspur, Cashel Lions Club were looking for a project that would bring lasting benefit to the town and community. It would be a permanent monument to the existence of the club and its service to the community. The big problem was money and the Lions looked around for possible sources. One of the members of the club was Dermot O’Brien, a brother on Vincent’s, and he was requested to make an approach to the owner of Larkspur. He received a very positive reply from Mr. Guest.

Another member of Cashel Lions, John Fahey, became aware of the intention of Peter McCluskey to dispose of a piece of his land facing Our Lady’s Hospital. It seemed the ideal size and location for a Pitch and Putt course. Later, John Fahey donated the pillars and gates to the park, which came from the entrance to Mullinahone Church.

Raymond Guest gave £2,000 towards the purchase of the land and a later contribution of £500 towards its development. The name, Larkspur Park, was agreed, and a committee, known as the Larkspur Park Development Committee, was set up to develop the park.

Seamus also recalled the story about a major event that was held on the Pitch and Putt course in 1970, an attempt to set up a record for the greatest number of pitch and putt holes played in a 12-hour period.

The main contestant was Tom Brown, a member of the Gardai from Mountrath, and he succeeded in completing 666 holes. He was pressured by two locals, Michael Tattan and Joe Fahey, who succeeded in completing 575 holes each. Both of these were encouraged by Jim Devitt as they wilted towards the end of the day, but they stuck it out in spite of being tired and sore.

Seamus congratulated all the committees and paid special tribute to Paul Flynn who had been a FAS supervisor responsible for a lot of development that went on in Larkspur. He thanked FAS and TUSLA agencies for helping to maintain Larkspur Park over the years. He also paid tribute to Catherine O’Connor and Rosemarie Maher who had both worked tirelessly for the betterment of the Park while of the Larkspur Development Committee.

Seamus thanked all those that had contributed to the success of Larkspur for the past fifty years and wished everyone involved in promoting and maintaining the Park continued success in the coming years.