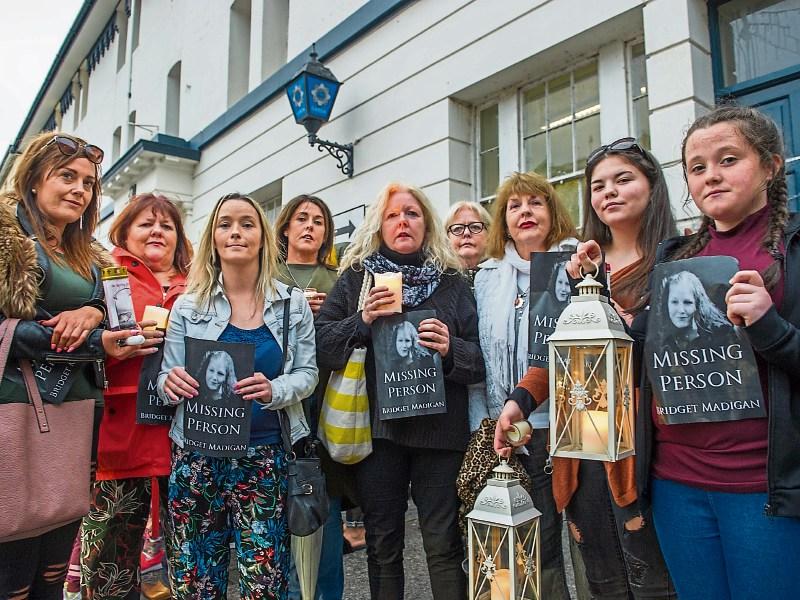 Family and friends of missing Bridget Madigan staged an hour-long candlelit vigil outside Clonmel Garda Station on Sunday night and issued a fresh appeal for the public's help in finding the Clonmel woman, who disappeared nearly a year and half ago.

The last confirmed sightings of Bridget Madigan, a 37 year-old mother of four children, were at Western Road and on O'Connell Street in Clonmel on February 8 last year. Her disappearance was reported to the gardai in Clonmel on June 15 last year.

Bridget's first cousin Olivia Madigan said they organised the vigil to raise public awareness that Bridget was still missing in the hope of jogging people's memories of any sightings they may have had of her before her disappearance.

She appealed to anyone who may have any information, even if they consider it to be insignificant, to contact the Gardai in Clonmel, who are investigating Bridget's disappearance. Missing persons posters have been erected around Clonmel and a similar renewed appeal for information on Bridget's whereabouts has been made on social media.

Olivia said Bridget's disappearance was heartbreaking and her family and friends miss her and love her.

"Someone must have seen something. Bridget can't have just disappeared," she appealed.

Olivia said Bridget's medication and her social welfare payments haven't been collected since she went missing.

While Bridget resided in the Clonmel area, she had been known to visit England. Her family moved to London when she was a child.

She travelled to England in November 2015 and returned to Clonmel on January 29 last year. It was initially thought she may have returned to England and there was an unconfirmed sighting of her in Belfast.

Gardai made inquiries with the PSNI, Interpol and the police in England. Olivia said the Gardai have now established that she didn't leave Ireland after her return last January.

Clonmel Garda Superintendent William Leahy has echoed her family and friends' appeal for information on the whereabouts of Bridget Madigan. He said it was an "open and live" missing persons investigation and the gardai were liaising with her immediate family. He would not comment any further on the investigation.

Bridget Madigan is described as being 5ft 4” in height, medium build with long fair to brown coloured hair. When last seen she was wearing black knee high boots with gold around the heel and sole, a black padded long jacket and black leggings.

Anyone who has seen Bridget or who can assist in locating her is asked to contact Clonmel Garda Station on 052-6177640, the Garda Confidential Telephone Line 1800 666 111 or any Garda Station.