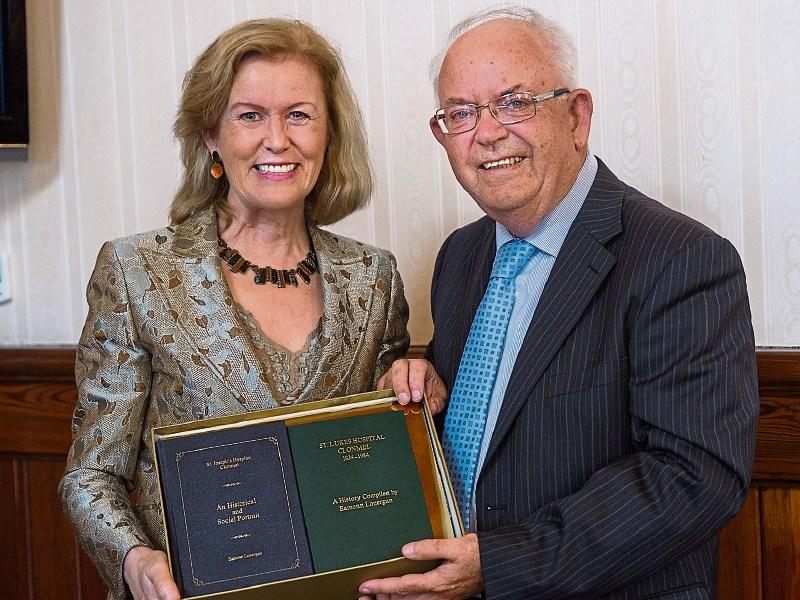 Eamonn Lonergan presented books on the history of St. Luke's and St. Joseph's Hospitals in Clonmel to Anne Anderson

Two books of a personal and professional interest were presented to Clonmel-born Anne Anderson when she returned to her home town for a civic reception at the Town Hall.

Ms Anderson is Ireland's first female ambassador to the United States, a post from which she will retire next month.

She also had the distinction of serving as the country's first female ambassador to France, the United Nations in Geneva and New York and the European Union in Brussels.

She was born in Clonmel and lived on the Slievenamon Road in the town until she was eight, when her parents Tom and Margaret (Madge) moved first to Kilkenny and then Dublin.

"The St. Luke's book will be of particular interest to Anne Anderson as Tom Anderson, her late father (who came from Roesboro, near Tipperary town) was on the nursing staff of the hospital for over 25 years", Mr. Lonergan told the gathering.

"Tom resigned from his post in St. Luke's on August 31st 1960 on being appointed head night nurse in St. Canice's Hospital in Kilkenny. He worked for about three years in Kilkenny and moved on further promotion to Portrane Hospital in Dublin.

"When Tom Anderson came to St. Luke's in 1935 the hospital accommodated 837 patients, 383 male and 454 female. There was a small decline during the years of the Second World War.

However in the 1950s overcrowding got progressively worse and in 1958 the hospital accommodated a record high of 903 patients, 508 male and 395 female. The same year 21,075 patients were accommodated in all of Ireland's mental hospitals, which was again a record".

Mr. Lonergan went on to say that there was a direct connection between St. Joseph's Hospital and the Irish diplomatic service in the 1950s and early 1960s.

"In the 1800s, when the hospital was the Clonmel Workhouse, the longest-serving Master of the Workhouse was Michael Boland, from 1874 to 1897. One of his sons, Charles Boland, was a well-known poet and author. Charles joined the civil service and in due course became Commissioner of Valuation.

"Charles was uncle of Frederick H. Boland, who was a distinguished Irish diplomat. Frederick was assistant secretary and secretary of the Department of External Affairs in the 1940s. He served as first Irish ambassador to the Court of St. James in London from 1950-56.

"In 1956 he became ambassador to the United Nations and was President of the General Assembly when he had a well-publicised run-in with the Soviet leader Nikita Krushchev.

His daughter Eavan Boland is a leading Irish poet".

Mr. Lonergan reminded the gathering that Anne Anderson had also served as Irish ambassador to the United Nations.