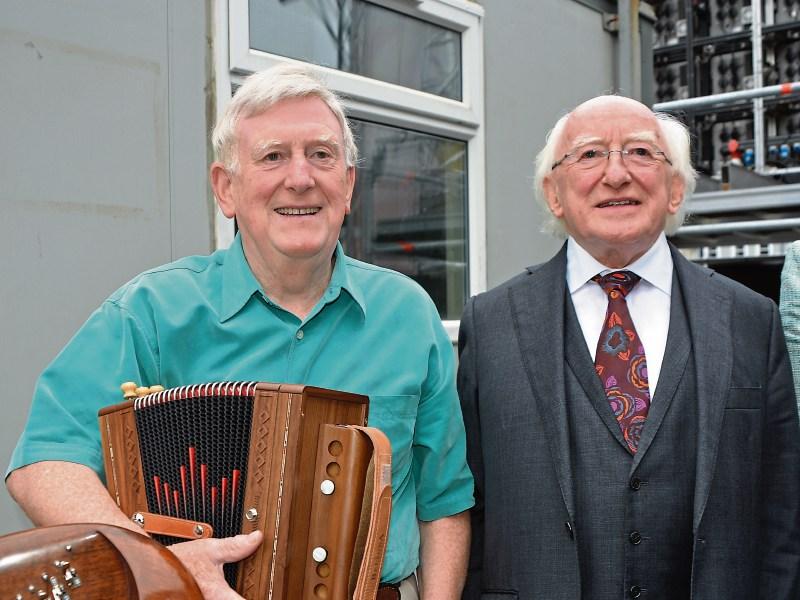 Having been on alert  for the call from John F  Kennedy as a full time reservist  in the US army at the height of the Cuban missile crisis, legendary musician Bobby Gardiner had to wait more than  20 years before being  called into action for a US Commander in Chief.

When pressed into service Bobby Gardiner duly obliged playing the acccordian on the stage in Ballyporeen  for the visit of US President Ronald Reagan  in 1984.

On that day  Bobby was part of a group of Cashel Comhaltas musicians  who provided the entertainment for Ronald and Nancy in front of a worldwide audience.

It catapulted  the Cashel group of musicians into the global spotlight, a performance that was the catalyst for the establishment of  the Bru Boru heritage centre in the town and the beginning of a phenomenal show that has attracted a huge  audience every year in Cashel  and has travelled all over the the globe.

Now moving into its 26th year -   the Bru Boru  performers, and Bobby Gardiner have been involved in the famous summer shows  every year - began another summer season last night (Tuesday  27th)  and the show will continue  up to mid August   running for five nights a week from Tuesday to Saturday .

Whenever traditional music is spoken about in this country, or in  any other  country, the name of Bobby Gardiner  is always mentioned among the greats.

He is one of the few living legends in traditional music and  he loves  being part of the  run of summer shows at the Bru Boru centre in Cashel and  has enjoyed bringing the show on tour in  China, Japan, Spain, Canada and the US over the years.

From Lisdoonvarna, a townland near Doolin, Bobby Gardiner has lived in Burncourt  since he returned with his wife Anne (Kearney)  and their daughter Kelly from America  in 1970. The couple met after Bobby had heard Anne sing at a Fleadh Cheoil. They had two more daughters Fiona and  Linda  all three of which are accomplished musicians.

The previous year  Bobby married Anne,  a Tipperary woman whose family is from Burncourt. The duo  formed  a successful performing partnership playing all over the country.

His musical career began  at the age of eight when he started to play his mother Delia's old melodeon with the likes of Micho Russell and Micleen Conlon.

At the age of 15, he was asked to join the Kilfenora Céilí Band and in 1957 he joined Malachy Sweeney's Céilí Band from Armagh and travelled throughout Ireland as a professional musician.

Starting out he remembers heading off on his bicycle and not returning until late in the morning.

“It was a great training ground  for a young musician, it was no joke it was hard going. They would be knocking the sparks off the floor and I had to play for the dancers,” he said.

He had to ask his father for permission to join Malachy Sweeney’s Ceili Band at the time because they had to play in Northern Ireland.

“I remember being stopped at checkpoints by the B Specials  and we had to get out of the vehicle we were travelling in and put our hands up and be searched. All we wanted to do is play music” said Bobby.

In 1960, Bobby followed his brother Mike and sister Mary to New Haven, Connecticut. During the day he worked as a mechanic on the New York Railway while playing for dances with the likes of Paddy Killoran, Joe Cooley, Ed Reavey and Joe Derrane as well as doing some session work for Colonial Records.

His solo recording career began when Justus O'Byrne De Witt heard him on the Jack Wade Ceili Band record and contacted him to record his first LP, "Memories of Clare" which was one of the first solo LPs by an Irish button accordion player. He also recorded with Paddy Killoran.