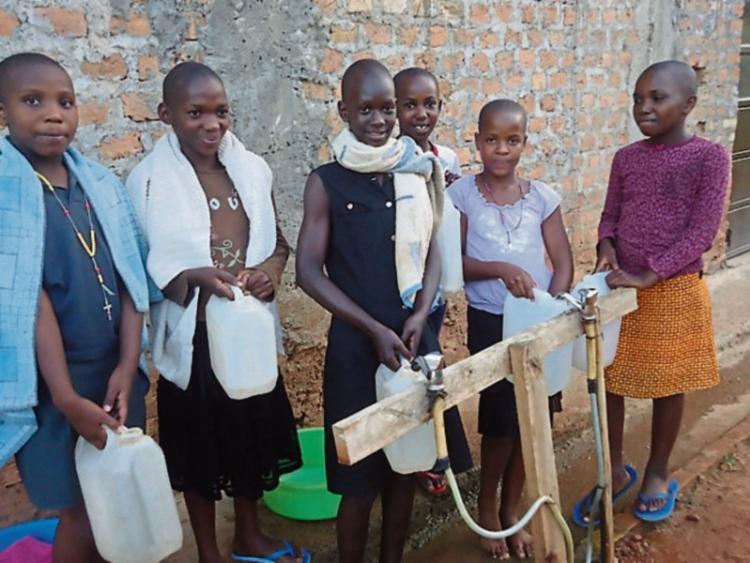 The children of Coloma Primary School returned to school for the second term at the end of May only to find two new full rain water tanks of 10,000 litres each, writes Sr. Mona Maher.

Thanks to the people of Roscrea and to Comhaltas, who held a fund raising Concert in Racket Hall in February, these two tanks were bought and installed at Coloma Primary School.

It was a blessing that during the school holiday in May there was heavy rainfall and so the tanks which are attached to a dormitory were filled and to overflowing. The children were amazed and happy to find running water on tap for the new term.

In order to conserve the water the children do not have free use of it. Each child has her own container and once a day she fills three litres which is the amount to be used for the whole day, bathing, washing, and drinking.

Being a boarding school it is not very much, but the next rains are not expected until the end of August. Every drop of water is precious.

After bathing and washing of clothes the water is collected and carried to the vegetables and fruit trees.

On behalf of the school administration of Coloma Primary School I thank you, my friends, and friends of the school for this great gift of water to the children.

In many homes in Uganda people walk miles to collect water and in the dry season it is a serious problem.

Over my more than 40 years in Uganda, I have seen a huge change in the climate – the temperatures have increased and the rainfall had decreased considerably and with more violent storms.

Wind was almost unheard of but now during the dry seasons there are strong winds with severe drying effects.

The dry seasons are longer and the wet seasons shorter.

Water is the greatest environmental challenge to be faced by the country and with a population of over 40 million and growing, one can only hope for positive environmental change for the future.