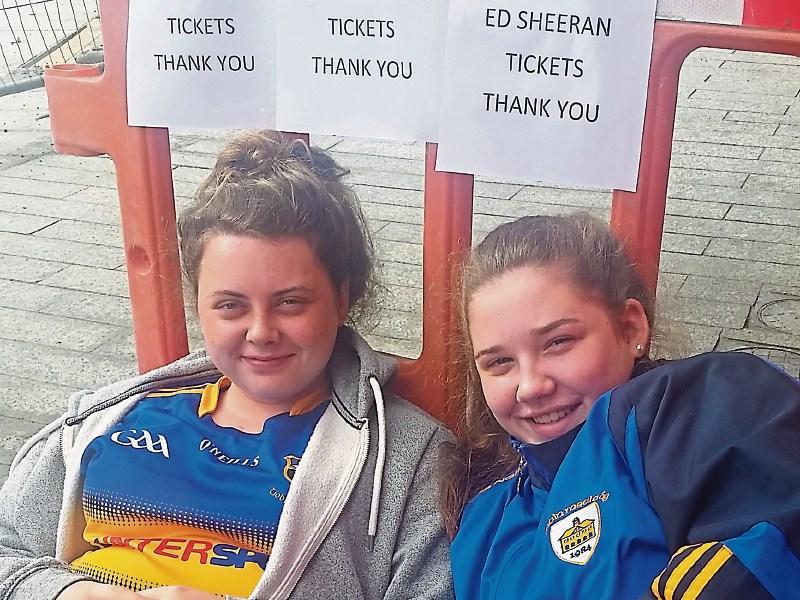 Clonmel girls Lucy Whelan (left) and Rachel O'Connor outside the Centra store in John Street, Waterford, where they are queuing overnight to buy tickets for Ed Sheeran's concerts tomorrow morning.

Two Clonmel girls are going the extra mile to make sure they see Ed Sheeran in concert next summer.

Tickets for the seven gigs that the English singer/songwriter is performing around the country next May go on sale at 9am tomorrow, Saturday.

However 16 year-old Lucy Whelan and 14 year-old Rachel O'Connor are leaving nothing to chance - they've been queuing outside the Centra Store in John Street, Waterford, since 8.30 this morning, Friday, to ensure they're in pole position when the doors open and the tickets go on sale tomorrow.

The girls are accompanied by Lucy's mother Anne Marie Whelan, who tonight is planning to sleep in her car, which will be parked near the store.

"People are stopping to talk to them and the shop and a nearby restaurant have offered them food and toilet facilities".

"There's a great atmosphere here and others have now started to join the queue.

She says that Lucy, from Lisronagh and Rachel, from Tivoli Heights, who are both in Banna Chluain Meala, are well prepared for their overnight vigil.

"They have sleeping bags, pillows and headphones with them", she says.

"They're both massive Ed Sheeran fans. Lucy has seen him before in Croke Park but she cried her eyes out when she couldn't get a ticket for his last show here.

"We're hoping to go to one of his concerts in Pairc Ui Chaoimh in Cork (on May 4th and 5th) but we'll take whatever we can get", says Anne Marie.

Ed Sheeran is also performing at Dublin's Phoenix Park, Galway's Pearse Stadium and the Boucher Playing Fields in Belfast next May.

And as the title of one of his hits suggests, Lucy and Rachel are Thinking out Loud that it will all have been worth it once they buy their tickets tomorrow morning.