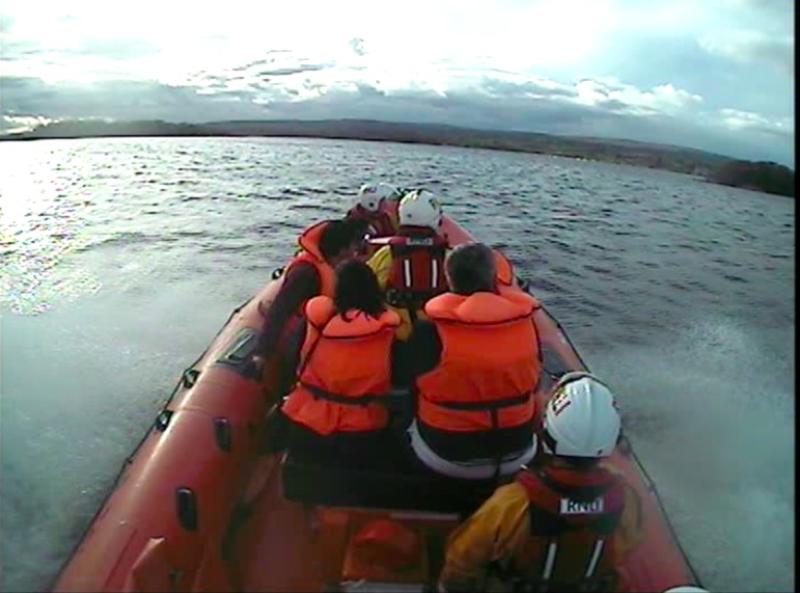 The first incident happened on Friday, August 4, at 7.20pm, when Valentia Coast Guard requested Lough Derg RNL to assist six people after their 38ft cruiser ran aground at the Goat Road, on the eastern shore of Lough Derg.

At 7.40pm the lifeboat launched with helm Eleanor Hooker, Dean O’Sullivan and Kevin Dooley on board. Winds were westerly, Force 3. Visibility was good.
The lifeboat located the cruiser inside the Goat Road. and the navigation buoy E. The lifeboat took soundings and came in alongside the cruiser. All six passengers were found to be safe and unharmed and were requested to don their lifejackets.

An RNLI volunteer transferred across to the vessel and checked that it was not holed. He set up a bridle and tow and told the passengers what to expect as the boat was taken off the rocky shelf.

The lifeboat made made numerous attempts to take the cruiser off the rocks, but it was stuck fast.

The owner of the cruiser had arranged for two marine engineers to attend the cruiser on a motorboat. The lifeboat crew made contact with the engineers and advised them that they were taking all passengers and the RNLI volunteer off the cruiser to lighten its load, and agreed that the two experienced engineers would take the cruiser off the rocks with their vessel.

The lifeboat informed Valentia Coast Guard of the plan, and that it would stand by until the cruiser was afloat.

At 9.26pm, the cruiser was afloat, but as night was falling, the lifeboat took the passengers across the lake to the closest harbour at Rossmore, whilst one of the engineers helmed the cruiser.

On Sunday, August 6, t 11.36am while on a training exercise, Valentia Coast Guard requested Lough Derg RNLI lifeboat to assist six people after their 25ft motorboat fouled its propellers on a line and suffered engine failure. The boat was reported to be near Coolbawn, at the northeastern shore of Lough Derg.

The lifeboat, with helm Peter Clarke, Owen Cavanagh and Kevin Dooley on board, responded immediately. Winds were southwesterly, Force 5. Visibility was fair with frequent heavy squalls. They located the vessel at 11.50am.

All six passengers were found to be safe and unharmed and wearing their lifejackets.

The motor boat had fouled its propellers whilst wake-boarding, and then suffered engine failure. The skipper dropped anchor to prevent being pushed onto rocks.

An RNLI volunteer was transferred across to the vessel, where he cut away the lines caught around the propellers of both engines.

He set up a bridle in preparation for a tow, and after he weighed anchor, the lifeboat took the boat and her passengers under tow to Coolbawn Quay.

Liam Maloney, Lifeboat Operations Manager at Lough Derg RNLI Lifeboat Station, advises all boat users on the lake, to bring up to date charts of the lake and plan your passage before leaving harbour, and do not to stray off the navigation route.

He further advised boat users to make sure ropes are clear of engines and carefully stowed when not in use.