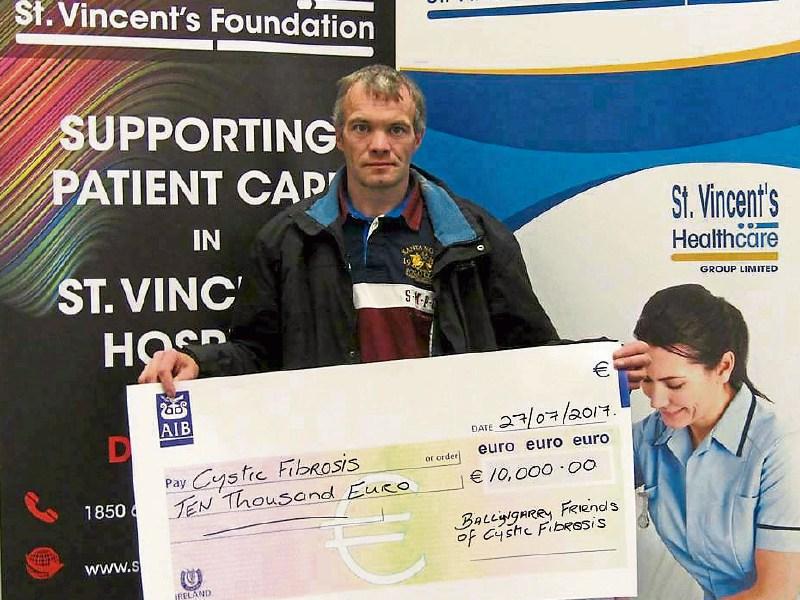 Seamus Kelly, who was diagnosed with Cystic Fibrosis at the age of 6, is pictured at St Vincent’s Hospital with the latest cheque from funds raised by Ballingarry Friends of Cystic Fibrosis

Seamus Kelly from Ballingarry is not one to sit on his laurels.

The 39 year old might have Cystic Fibrosis but you would not think it when he talks about his work and hobbies.

Seamus was diagnosed with Cystic Fibrosis at six years of age. It took three tests before he was eventually diagnosed. He was sick since birth and nobody could figure out what was the matter. There was no history of CF in his family so it was a big surprise that he was diagnosed with it.

Both his parents, Kathleen and Jim, are carriers of the gene.

Seamus is the eldest of four children and only one of his siblings is free of the illness.

His brother Adrian is 33 and was diagnosed at birth as was his sister Aileen who is now 22. Liam is the only one of Jim and Kathleen's children not to have Cystic Fibrosis. He had his own health scare a few years ago with Cancer but has since been given the all clear which is a huge relief to all of the Kelly family, according to Seamus.

Seamus goes to St Vincent's Hospital in Dublin once a year for a “recharge of the batteries” as he says. His treatment involves getting a steel wire or tube in through his elbow and across his chest. He is under a local anaesthetic for this and if the wire strays at all, like it did last year, it is “extremely painful, like getting a shock”, according to Seamus. This tube drains the fluid from his chest.

As he is getting older Seamus feels that his Cystic Fibrosis is leveling out in terms of how sick he gets, “as you get older you have the cop on to deal with it, you are careful about your health and you don't do stupid things”.

Diet is not an issue as food doesn't affect the disease although there is a Diabetic strain of Cystic Fibrosis and that needs particular attention. Seamus does have to take a digestive tablet with each meal and after a lecture from one of his doctors a few years ago is getting better at following medical advice.

The warm weather is not a friend to people with Cystic Fibrosis as the air is dry and makes those living with the disease suffer very painful bouts of coughing. The damp, cool air of Autumn, Winter and early Spring are perfect on the other hand. Lucky for Seamus these are his hunting months. Unlike most farmers Seamus likes the wet weather “the wetter the weather the better it is for me”.

This time in St Vincent's he had to stay for five days and he was administered an antibiotic as he had a very bad infection but he didn't even realise he was sick as he has had a very busy summer working on the fundraising Family Fun Day in order to raise money for Cystic Fibrosis Ireland.

Seamus has been fundraising for Cystic Fibrosis for the past eight years and in that time the committee and himself have been responsible for raising €75,000 from various events. For this he is extremely grateful to the people of Ballingarry parish and surrounding areas who have supported him and his family so much.

The money has gone to Cystic Fibrosis Units in Waterford Regional Hospital, University Hospital Limerick and St Vincent's Hospital in Dublin. It is usually divided half to research and half to the CF Units which goes towards equipment to treat the patients. There is a plaque in St Vincent's thanking the donations made by Ballingarry Friends of Cystic Fibrosis to the Unit.

There are only 34 beds for the 360 Cystic Fibrosis patients attending St Vincent's so the unit is constantly under pressure. Seamus hates having to stay at the hospital as he feels “too healthy to be taking up a bed on somebody who really needs it. I don't need to be admitted all of the time. I keep myself busy and healthy by being outdoors and doing what I love which is out in the fresh air with the horses and dogs”.