Fethard Abymill - A mesmerising performance by a true Troubadour 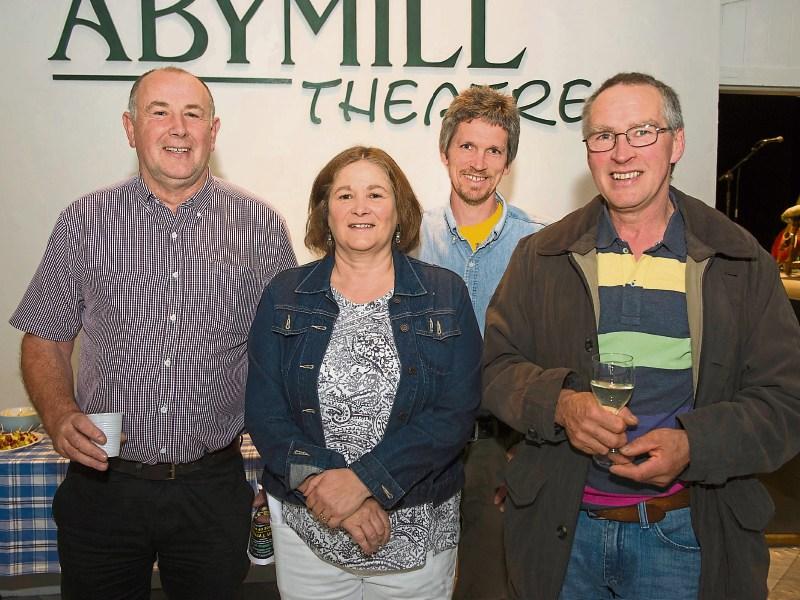 Photographed at Seán Tyrrell's 'Message of Peace' Show in the Abymill Theatre Fethard were from: Kieran McHugh, his sister Helena O'Shea, John O'Shea and Martin O'Shea.

Seán Tyrrell gave a mesmerising performance in the Abymill Theatre, Fethard last Saturday, August 19. The Fethard Historical Society was delighted to welcome old friends such as Dr. Martin Mansergh, as well as Mary Alice O’Connor and Jeremiah Long from the Excel in Tipperary Town. Shannon Forrest, FHC Experience, and her mother Sheila came along to support us and Shannon was most impressed with her first visit to the Abymill.

We were also very pleased to have so many new faces in the audience specially two gentleman who had travelled down from Co. Kildare. FHS stalwarts, Martin and Helena O’Shea told us they came to relive memories of listening to Seán Tyrell in McGoverns Pub in New York in the 1980s.

For those of us who didn’t know what to expect it was a revelation as Sean performed his ‘Message of Peace’, the life of Sean Boyle O’Reilly, told in song and story. As someone said afterwards it was a return to the days of the Seanachaí weaving magic with words, who holds his audience in the palm of his hand.

Sean Tyrrell brought all the passion of the true musician to his telling of the tale, bringing his hero to life in an amazing performance that never once flagged. As his encore, Seán played ‘Ballyroan’ especially for the gentlemen from Kildare. The audience accorded him a standing ovation in tribute to a superb performance.

We would like to thank everyone who joined us in the Abymill Theatre for our celebration of the 150th Anniversary of the Fenian Rising of 1867. A special souvenir booklet, detailing the stories of our own local Fethard heroes, Michael Doheny and Thomas Francis Bourke, was presented to everyone in the audience.