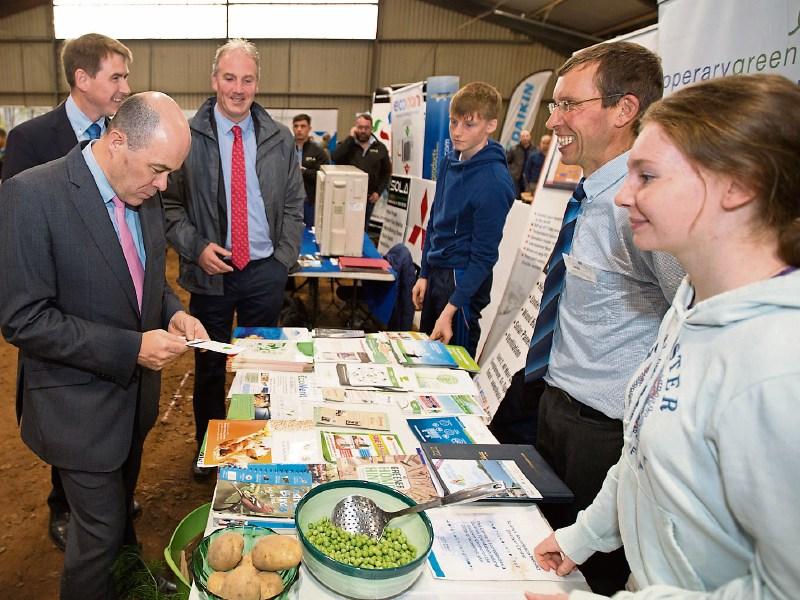 The Minister for Communications, Climate Action and the Environment, Denis Naughton, taking in some of the exhibits on show at the Energy in Agriculture conference in Gurteen Agricultural College

This year college course search has shown that we are seeing a lot more people wanting to get back into farming and related careers in horticulture.

The demand for agriculture related third levels courses is similar to those courses offered by Teagasc’s Green Cert.

Figures from the Leaving Certificate candidates of 2017 showed a strong demand among them to study agricultural science at third level.

Out of the leaving cert students who sat their exams in June throughout Ireland, a whopping 7,866 of those sat the agricultural science paper.

The figures show that almost 2,800 students put down agriculture / horticulture as one of their choices on their CAO form, with numbers up again from last year’s 2,328.

From the period of 2014-2016, Teagasc was approved to appoint 70 temporary based education officers due to such a high demand for places.

In addition to this, 15 new temporary education officers were approved early this year to provide additional courses in areas where there was high demand.

In November, 3,500 people were waiting to be accepted onto Green Cert courses. Teagasc would normally have to deal with about 500 applications in one year.

Make sure to visit FRS at the National Ploughing Championships from September 19 to 21 in Screggan, Tullamore.

Drop in to the FRS tent where we will be hiring farm workers over the course of the three days.