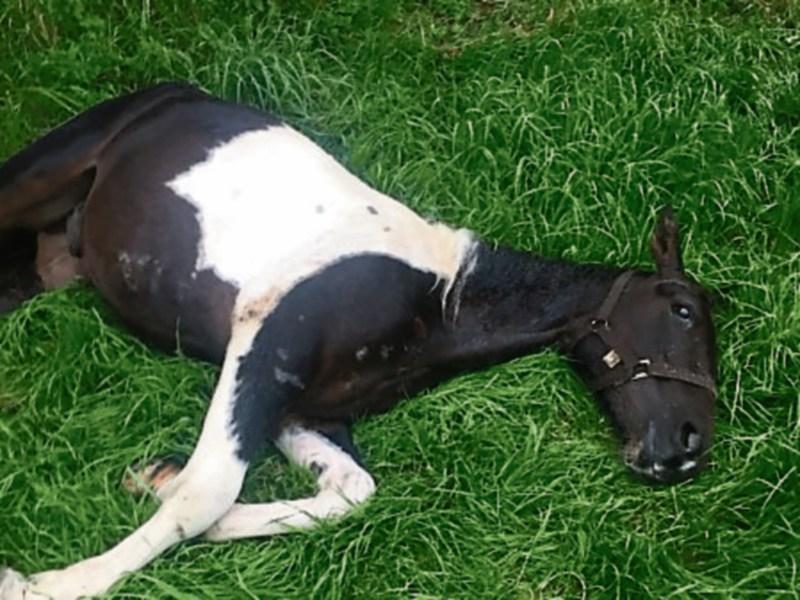 This horse was left dying in a field for days after it was injured during a sulky race held at Kilmacomma, near Clonmel, on the Dungarvan road.

A leading animal welfare campaigner has slammed the mistreatment of animals during sulky races held on Irish roads as "an absolute disgrace".

Conor Hickey, chairman of the Tipperary Society for the Prevention of Cruelty to Animals (TSPCA), said "there doesn't seem to be the will to deal with this, nobody's willing to take it on and do something about it.

"I don't think it would happen in any other country".

He made his remarks after a horse was left to die for days in a field after it was injured during a sulky race near Pinewood Drive, just outside Clonmel on the Dungarvan road.

Mr. Hickey says he was away when he was first contacted about the horse's plight.

When he returned to Clonmel three days later he was told that the animal was still lying injured in the field.

With the horse lying on the ground and in obvious distress, he contacted the Gardaí and a vet was summoned.

When the vet examined the animal he had no option but to euthanise it.

"I was told that when it fell, people were beating the horse with plastic pipes in an effort to get it back on its feet. When that didn't succeed the horse was just abandoned.

"These animals are being raced flat out on tarmacadam roads wearing iron shoes and it's only a matter of time until they slip and fall. It's not as if they're running in a field", said Mr. Hickey.

"There's a slope on the Dungarvan Road into Clonmel, where this race took place, and that makes it even more hazardous for the horses.

“When they're travelling at speed the slightest thing, even a stone, can cause them to fall".

He said that the TSPCA could receive between five and six phone calls a day complaining about the cruelty that animals were suffering during sulky races.

"It's absolutely crazy. More often than not children as young as 9 or 10 years of age are driving these sulkies.

"It's gone beyond a joke the way the animals are being treated".

Residents of Pinewood Drive raised the alarm when they became aware that the horse was injured after two of the sulky carts had collided.

"People were angry and upset about it. It was upsetting to see the horse lying in a field for days", said one resident, who didn't wish to be named.

"The race took place on a Friday evening, when that road is busy, and the worry is that someone will be killed".