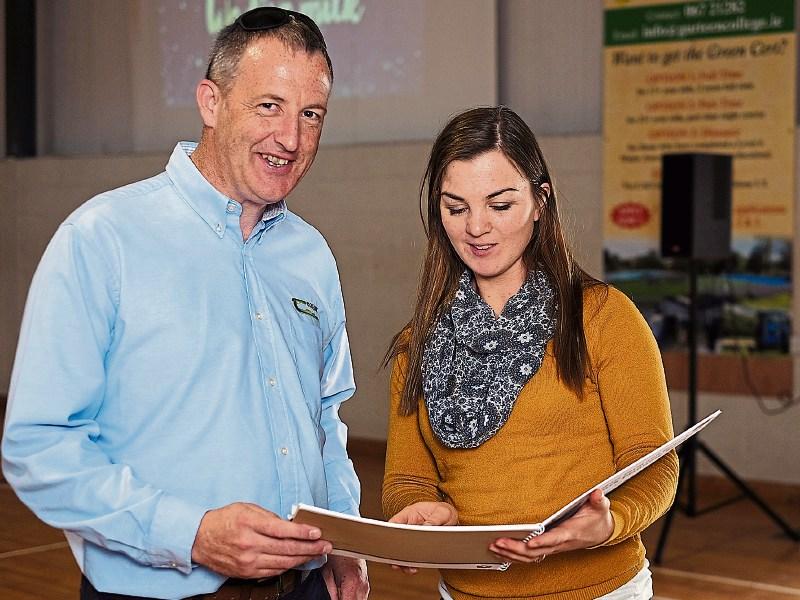 Dairy farmers with less than 150 cows can work up to three hours longer per day than those with up to 550 cows, according to new reasearch

The research, conducted by Teagasc PhD candidate Justine Deming, MSc, was unveiled at an open day hosted by Arrabawn Co-op in Gurteen College.

Ms Deming, from Connecticut, showed that labour efficient dairy farmers milking between 253 and 534 cows were finishing their day’s work between 3.30p.m. and 4pm, whereas those with between 79 and 149 cows will work up to three hours more.

This is a result of larger farms having more hired employees to perform the evening milking and points to the bigger dairy farmer potentially having a better quality of life.

Some 38 dairy farmers across the country, including Arrabawn suppliers, were researched over a 12-month period between 2015 and 2016 by Ms Deming, who shared some of her findings at open day attended by over 800 people.

Ms Deming, who taught dairy science at college level in the US for two years before coming to Ireland to do her PhD, said that among the key findings of the research were that large farms tended to be more efficient, though they come with a higher need for hired labour.

As expected, the most amount of time is spent on milking, which on average accounts for 33 per cent of farm hours, while cow-care (primarily winter feeding) comes next at 17 per cent, grassland management at 11 per cent and farm management 10 per cent.

Looking specifically at the two biggest contributors to farm hours, the top efficient 25 per cent of farmers will spend up to four times less on cow-care as the bottom 25 per cent and 40 per cent less time on milking, these are largely due to farm facilities and management practices.

Key differentiators between the more efficient and less efficient in relation to milking include reducing the rows of cows being milked, introducing automatic backing gates and having once-a-day milking for at least four weeks in the spring.

With regard to cow-care, reducing the number of areas to feed in the winter, giving out fresh feed every second day - as distinct from every day for the smaller farmer - and feeding exclusively with a tractor / shear grab have the potential to make a difference in overall labour demand on farm.

“This is the first time in about 10 years that a labour study this detailed has been done. We can’t make sweeping generalisations about the industry as a whole, as the sample is not that large but the research indicates what farmers of varying herd sizes are capable of to enhance labour efficiencies,” said Ms Deming.

Comparing farming in Ireland to the US, she said the biggest difference she found was seasonality.

“At least those who aren’t winter milking get a break in Ireland. In the US, it’s pretty much year-round. Here, even though the spring is very intense, you still know you have an opportunity to recharge at the back end of the year,” she said.

Arrabawn CEO Conor Ryan said: “Justine Deming’s piece was very interesting from the farming efficiencies perspective and a lot of food for thought was taken away, particularly in relation to some of the specifics she gave around achieving efficiencies.”

In addition to the talks, farmers were given demonstrations on farm skills, safety, body condition scoring and winter feeding and grassland management, while the event culminated with the annual Quality Milk Award Presentations.