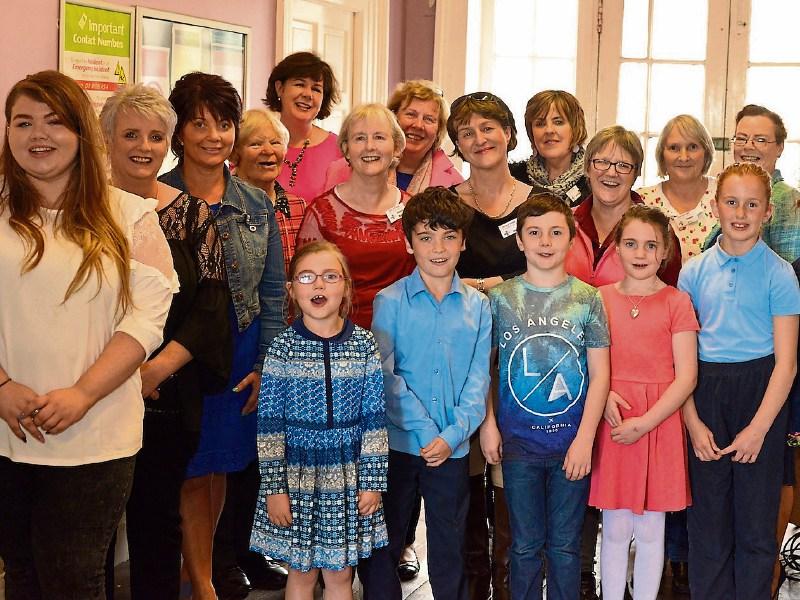 The classic  “How do I get to Carnegie Hall” joke  may need a bit of tweaking to explain how up to thirty members of a Tipperary choir will end up performing in the most prestigious musical venue in the world next year.

Of  course they will have to “Practice,practice, practice”  before they perform Handel’s Messiah  but  the members of the Circle of Friends cancer support centre choir in Tipperary Town have had the doors of Carnegie Hall opened to them because of the role the choir  and their uplifting music has played in the  enriching of a community.

Beating of competition from all over the world the choir  , aged six to eighty, consists  of people who have been diagnosed with cancer, family members and siblings.They  have been awarded a rare opportunity, a once in a lifetime experience of performing on one of the greatest  stages in the world and being able to say they performed at Carnegie Hall ,the ultimate badge of musical honour.

Under the guidance of  Circle of Friends volunteer Mary Ronayne the choir is set to mark a most incredible journey that started out in August in the humble surroundings of Templeneiry Church  in Bansha where they performed their debut “Light Of My Life”concert  to taking to the stage of Carnegie Hall in New York.

After the summer break the members of the choir returned to practice sessions last week with great enthusiasm  for the challenge  ahead.

A theatre and musical professional, Mary Ronayne, joined Circle of Friends as a volunteer  following the passing of her mother from Alzheimers offering her services to help people with alternative therapies such as music and drama..

“My background in music helped my mother deal with her illness.You need more than medication when you are living with health issues” said Mary who enjoys witnessing the pleasure singing brings to the Circle of Friends family.

She wanted to get the choir involved in an outreach programme and started out on her quest using all her contacts and knowledge of the music industry.

“I could have tried to get a slot for them in Cork Opera House but I decided to go for Carnegie Hall when I  was at it,why not” said Mary,

“ I received word a few weeks ago that my application for the choir to sing in Carnegie  Hall was successful.I was absolutely delighted because they are a marvellous group and everybody is so excited about going on this great adventure” said Mary.

She applied by sending off a virtual audition which was recorded at the Templeneiry concert and Carnegie Hall responded by inviting the Circle of Friends to perform as part of Handel’s Messiah with the New York Philharmonic Orchestra in November of next year.

The Carnegie Hall choir for the Messiah performance will be a combination of a four hundred strong professional cohort  and the remaining one hundred outreach places will be filled by choirs from all over the world, with the Circle of Friends choir among the lucky ones chosen.

“We had to send on Carnegie Hall the whole back story of the establishment of Circle of Friends and how the choir came about and its role in the community. To be selected for the outreach places left in the choir applicants  had to show how music has made an impact on  a community.The strength of the Circle of Friends  story beat off competition from choirs from all over the world.” said Mary

The Circle of Friends cancer support group in Tipperary Town was  established by the inspirational Jennifer Jones Hickey  in 2013.Users of the centre come from a wide catchment area that takes in West Tipperary, East Limerick and North Cork.

Located at the Station House building in the town, demand for the services provided by Circle of Friends  increased to such an extent that a new and permanent home had to be secured.

Volunteers have embarked on a fundraising campaign to meet their financial targets which has been met with overwhelming generosity in Tipperary Town and far beyond.

2018 is gearing up to be  an unbelievable year for the Circle of Friends with the opening of the new centre  planned for March  and later in the year the group choir will head to New York.

Unlike the stray  looking for directions to Carnegie Hall that became the subject of  the  classic joke all those years ago   the Circle of Friends choir will  know how they arrived at   their destination.Yes plenty of “Practice, practice practice “ but much,much more besides.