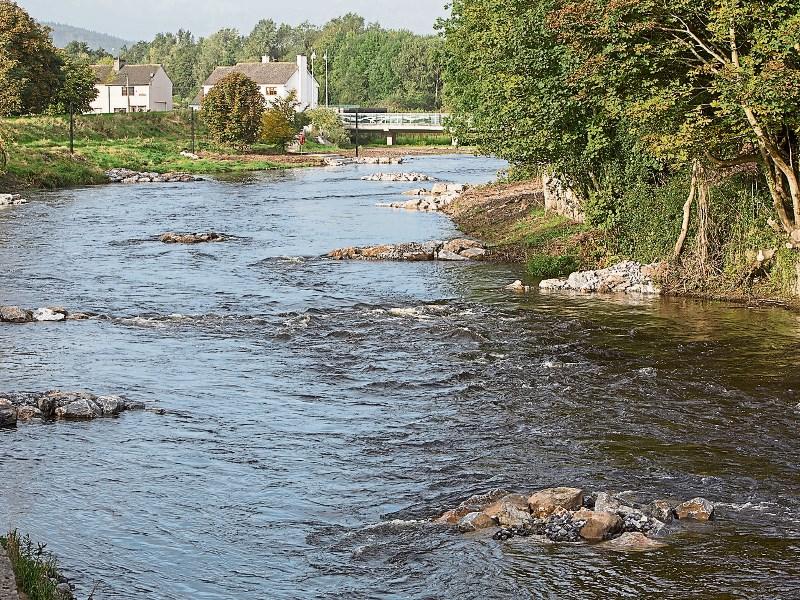 Ambitious plans have been drawn up for Suir Island, on the right of this photo, to connect it to Clonmel's town centre and Denis Burke Park and develop it as a public amenity and recreational area.

A masterplan for Suir Island that it's claimed "could be as much benefit to Clonmel as Central Park is to New York" has been unveiled.

Architect Kenneth Hennessy stated that "the proposal is robust and sustainable, and is trying to prepare a vision for this green lung of Clonmel" when he presented the plan to this week's meeting of Clonmel Borough District.

He said that one of its key aspects was to join Suir Island to the town, and the aspiration was that when you looked down from Sarsfield Street the street would continue onto a bridge that would cross the river and connect with the island.

This would be more than just a functional bridge to connect one side of the river to the other and it could also be used as an exhibition space.

The plan also includes a boardwalk that would connect to Denis Burke Park, so that people could get onto the island and pass through it.

Mr. Hennessy said Suir Island could be a starting point for visitors to Clonmel. With plans to bring 100,000 visitors to the proposed tourist attractions including the Bulmers visitor centre and the interpretative centre at the West Gate, traffic could be diverted to the island, where bus parking and additional car parking would be available.

He said that a public plaza could be built on the Quay side of the island. A boardwalk would be placed on top of the existing berm built as part of the flood relief scheme, and a natural amphitheatre would be created for events.

With new planting and seating a garden space could be created around Suir Island House. This would provide direct access to the water and was a great vantage point for the start of the canoe slalom course.

Bicycle and kayak storage could be accommodated there and the plan also includes an activity zone for orienteering, nature walks, archery and a river adventure course.

Mr. Hennessy said the vast majority of the island's 123 trees would be retained, although some were dangerous and needed to be removed.

He said the masterplan was there as a blueprint for the island, however long it took to complete.

The plan will be presented at a public meeting at the Main Guard at 6pm next Wednesday evening, October 25th.

People would be invited to comment on the proposal and they would have another ten days to make observations and submissions.

He said that several stakeholders including the County Council, Suircan Community Forum, the town centre forum, the OPW, the Old Bridge residents association and the National Parks and Wildlife Service had been consulted before the plan was drawn up - and what came out of the public consultation process was that the type of things people wanted for the island were all very similar.

Town manager Sinead Carr said that once the masterplan was in place it could then be broken up into segments for development as they went along.

They wanted to get the project "paper-ready" so that it would be prepared when funding streams became available.

The masterplan was welcomed by all the council members, including Cllr. Michael Murphy who said that Suir Island could be as much benefit to Clonmel as Central Park is to New York.

Deputy Mayor Richie Molloy said that Kenneth Hennessy and Associates had put a huge amount of work into the plan.

People had been wondering for years what would become of this jewel in the crown of Clonmel.