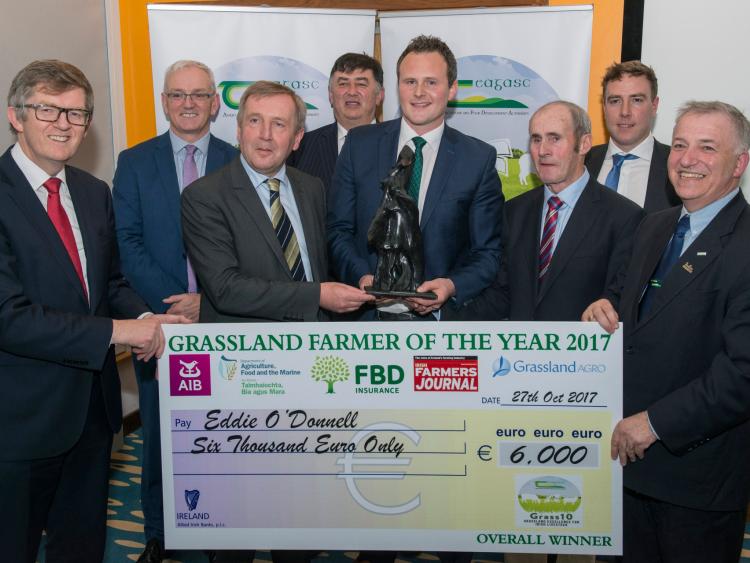 The first ever overall winner of the Grassland Farmer of the Year Award is Eddie O’Donnell from Golden, Cashel.

The Grassland Farmer of the Year competition recognises those farmers who are achieving high levels of grass utilisation in a sustainable manner.

Fourteen farmer finalists, who emerged from over 100 applications, gathered in Teagasc Moorepark last Friday, October 27, for the awards. The Grassland Farmer of the Year Awards is sponsored by the Department of Agriculture, Food and the Marine and it is one of the major initiatives as part of ‘2017 Year of Sustainable Grassland production’.

Speaking at the awards ceremony, Minister for Agriculture, Food and the Marine, Michael Creed TD said: “These awards represent the culmination of their efforts and an acknowledgement of their endeavour, skill and excellence in the area of grassland management. I believe that this competition will provide more focus and exposure of how to succeed at grassland to the wider livestock industry.

“Grass based production systems are at the heart of our efficient dairy, beef and sheep sectors, and recognised and valued by our international customers as a sustainable system. I experience this all the time on our trade missions abroad. Ireland has the unique selling point of being a grazing nation and we must continue to inform Europe and the world of this advantage.

“I would like to acknowledge and thank the judging panel, Teagasc and my own Department for their work in putting this competition together.

Winners of the Category Awards

Teagasc Director, Professor Gerry Boyle said: “Teagasc research indicates that grass utilisation can be increased significantly on farm. This competition, with an overall prize fund of €30,000, kindly funded by the Department of Agriculture, Food and the Marine, brings together and recognises the top 14 farmers in the country who are utilising best practice and the latest research on their farms.

“Teagasc has developed a world leading grassland web based grassland system in PastureBase Ireland, which has now more than 4,500 users. We must now increase the usage of the system further to help farmers grow and utilise more grazed grass.”

Padraig Walsh, dairy farmer and chair of the Grass10 stakeholder committee said: “In FBD we believe Grass 10 is a very important project to encourage better utilisation of our most valuable natural resource. We want to do all we can to improve farm profitability in Ireland. What better way to do this than to ensure better dissemination of the excellent research which is carried out by Moorepark.

“If we can lift grass utilised by just one tonne per hectare it would be worth over €500million euro to the country and over €6,000 euro to a 40 ha farm. “FBD is proud as the only Irish owned insurance company to invest our profits for the good of our most important customers, Irish Farmers. “

The Grassland farmer of the year awards are part of the Grass10 campaign which is supported by Teagasc, Department of Agriculture, Food and the Marine, AIB, FBD Insurance, Grassland Agro and the Irish Farmers Journal.