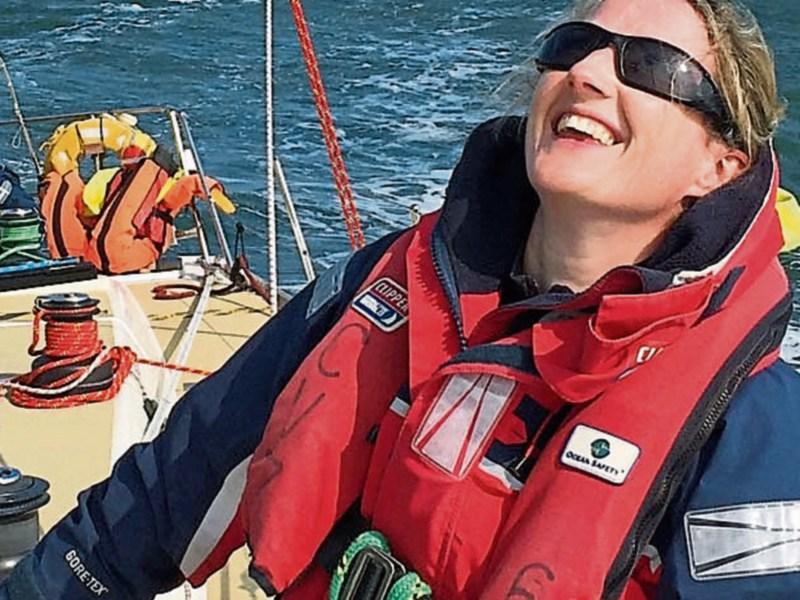 A chance meeting with one of the world's most famous sailors has given Ballycommon's Nessa Maloney the chance to sail the world with the Clipper Round-the-World Race.

The race started in Liverpool, England, and Nessa, daughter of Liam and Deirdre Maloney, left Ireland two weeks ago for familiarisation before joining the Cape Town to Freemantle leg of the race, a distance of 7,651km / 4,754 miles, taking her through some of the roughest waters in the world, the Roaring Forties.

She can expect 80-foot swells, boat speeds of well over 30 knots and wind speeds that can reach up to 120km/h or 70mph, if the weather is coming from the wrong direction.

However, the Irish Naval Service executive officer, who has acted as second-in-command of the LE Roisin, would not be on board if not for a chance encounter with Robin Knox-Johnston in Derry in 2014 when the race pulled into the famous city.

Nessa, who sails out of Lough Derg Yacht Club in Dromineer, bumped into Robin Knox-Johnston during a Beach Boys concert and he inspired her to sign up for The Southern Ocean Leg 3 of the 2017 race.

“We were in Derry for the visit of the Clipper Race during the Foyle Maritime Festival,” recalls Nessa.

“The captain was invited to a function where Sir Robin was the guest speaker.

“Knowing I am a sailor, the captain brought me as his guest. I got to meet Sir Robin in person and I must admit, I was star stuck. Not only did we meet but I was honoured to be in his company for the Beach Boys concert in the city.”

Sir Robin introduced Nessa to Clipper Race Crew Recruitment and Development Director David Cusworth, who convinced her she had to take part.

“He [David] wanted to know what took me so long to sign up! Now that I have finally taken the plunge I am asking myself the same question!”

For Nessa, who has always wanted to sail around the world, the Clipper Race was the perfect platform to get a taste of ocean racing.

“The attraction of the Clipper Race is that it is a race where crew must push themselves to perform as best as they can.

“I am in awe of the concept of the Clipper Race which allows people to experience the thrill of racing around the world in a one-design fleet. I still hope to sign up for a circumnavigation in the future but for now, I think The Southern Ocean Leg 3 will afford me the opportunity to push myself to the extreme,” she says.

Working for the Irish Defence Force, and experience in dinghy instruction, around-the-can racing, and deliveries, has given Nessa a head start when it comes to sailing on board a Clipper 70 yacht.

“The Naval Service has helped develop my leadership skills and this has been a big help when taking charge of deck evolutions on board the Clipper 70.

“When serving on board a Naval Service vessel, you rely on every single crew member and must operate as a cohesive team. On board the ship, we have a big emphasis on safety and train in damage control, fire fighting, and sea survival. These skills all transfer onto any sized vessel and are defiantly an advantage.”

Nessa found out during Crew Allocation Day that she will be part of Visit Seattle, skippered by Nikki Henderson.

“Nikki has an impressive sailing resume and I cannot wait to race with her.

“Having had a brief stint in Command of a ship, I am all too aware of the responsibility of overseeing a crew. I think these skippers are amazing,” she says.

Nessa’s friends, family, and colleagues have all taken a real interest in her Clipper Race adventure, and will be cheering her on during her entire journey.

“Everyone is extremely supportive. My dad is envious! Everyone wants to know about the boats and the training. My home Yacht Club have already suggested I give a talk afterwards. Everyone in work who has heard are full of questions as to what is involved. I hope my involvement will encourage more to apply!”

Nessa is expected to next hit land at Freemantle on November 21, having spent three weeks at sea.