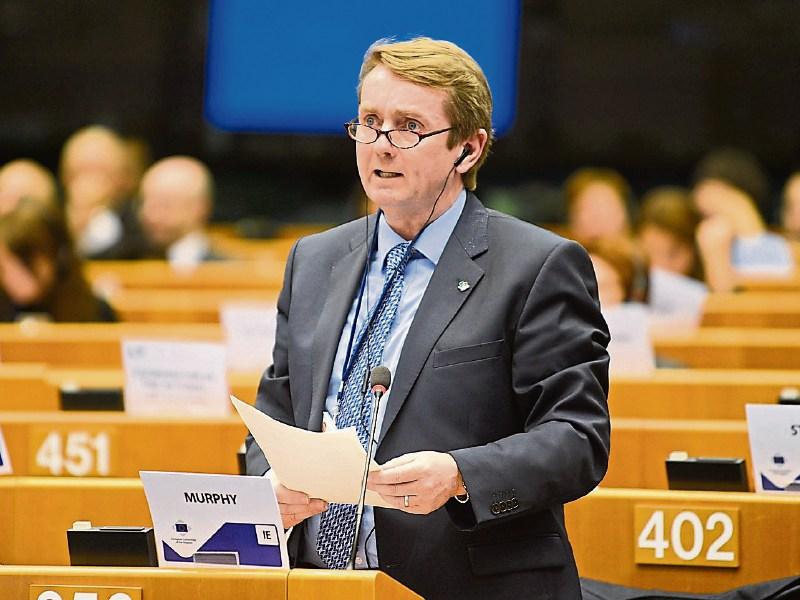 Cllr Michael Murphy addresses the European Committee of the Regions

With Brussels agreeing a €50bn severance package with the UK for leaving the EU and a crunch summit coming this month which could decide how the border between the South and North are handled, many in Europe and at home are concerned that not enough is being done to promote the work the EU does in Ireland and in regions such as Tipperary.

With the emphasis on a new round of Cohesion funding, concerns were expressed at this year's opening session of the European Week of the Regions in Brussels that the EU does not do enough to promote itself and that it falls down when it comes to communicating what it does on the ground.

For instance, outside the chamber in the corridors habited by civil servants and permanent representatives, Irish fears centred around the farming community and the perception that Brussels is all about red tape, and that such bureaucracy could lead to the growth of Brexiteers here.

While accepting the “red tape” arguments, the idea of it leading to anti-EU sentiment is not shared by Tipperary's Cllr Michael Murphy, head of the Irish delegation to the Committee of the Regions.

“Irish Farmers, and, indeed, farmers from every member state, have voiced their concerns regarding what they believe is undue 'red tape' associated with CAP payments. However, EU subsidies account about 60 per cent to 70 per cent of average farm income, something that is very clear to Irish farmers,” he says.

Nevertheless, the EU has listened to farmers calls for simplification and to that end has Omnibus Regulation, which contains a series of measures aimed at simplifying the policy with a view to easing the burden on and making life easier for both farmers and national authorities, Cllr Murphy states.

Other concerns centre around getting EU funding out of the major cities and into the regions, with some of the opinion that EU funding is being used in Dublin and the East Coast, especially on infrastructure such as the LUAS lines, instead of being trickled down.

The Southern Regional Assembly (based in Waterford) manages any ERDF programmes that affect Tipperary.

“The CoR, as a body representing regional and local interests, is actively lobbying the Commission with the aim of increasing the level of funding of the regions, and consistently argues (through its COTER Commission) for enhanced autonomy for regions in terms holding, planning and spending funds,” says Cllr Murphy.

With the EU emphasising the need to reorganise its Cohesion funding, Cllr Murphy points out that Tipperary has already benefited directly from it.

“The upgrading of infrastructure and investment in education around the country has benefited local people, including the people of Tipperary.

In terms of direct Cohesion funding, the Clonmel Main Drainage Scheme benefited from €17.4m of EU investment. The scheme has eliminated the discharge of untreated sewage from multiple outfalls to the River Suir and has brought the wastewater treatment facilities at Clonmel into line with the EU wastewater standards,” he points out.

And, he says, Tipperary has also directly benefited from funding available under the Horizon 2020 research and innovation fund, and the European Social Fund.

But, despite this, there is still the perception that not enough is being done in Europe to make communities aware of the level of work and funding that Brussels does for rural area. With countries such as Ireland now being a net contributor to the EU, the absence of signs pointing to EU aid for projects such as roads and other infrastructure was noted.

“Any project funded by the EU, through whatever mechanism, is required to acknowledge this contribution and display this acknowledgement on signage, websites, etc,” says Cllr Murphy.

However, in recognition that citizens don’t always take note of this, the EU has put in place a number of initiatives to raise citizens’ awareness of EU added value, he says.

Examples include EU Solidarity Corp, an initiative that allows young people to volunteer or work in projects in their own country or abroad that benefit communities and people around Europe; Enhanced Erasmus+ programme which allows young people to study in another EU country. In 2017 the ErasmusPro initiative was launched, and is an activity within the Erasmus+ dedicated to supporting apprentices on long-duration (6-12 months) placements abroad. This measure should open up the possibility for an additional 50,000 young people to spend at least six months in another member state in the period 2017-2020, and CoR local events that allow citizens to talk about Europe in local and regional public events.

And initiatives such as Erasmus+ can also help reduce youth employment, which stands at 15 per cent in the EU, a situation European Committee of the Regions president Karl Heinz Lambertz described as a "waste of potential, resources and the future".

“The CoR, as a policy making body, can make and lobby for the Commission for policies that address this issue. The EU more generally has a number of programmes to address youth unemployment, such as the EU Solidarity Core and Erasmus+, along with the Youth Guarantee, the Youth Employment Initiative, the New Skills Agenda for Europe and the Digital Skills and Jobs Coalition,” says Cllr Murphy.