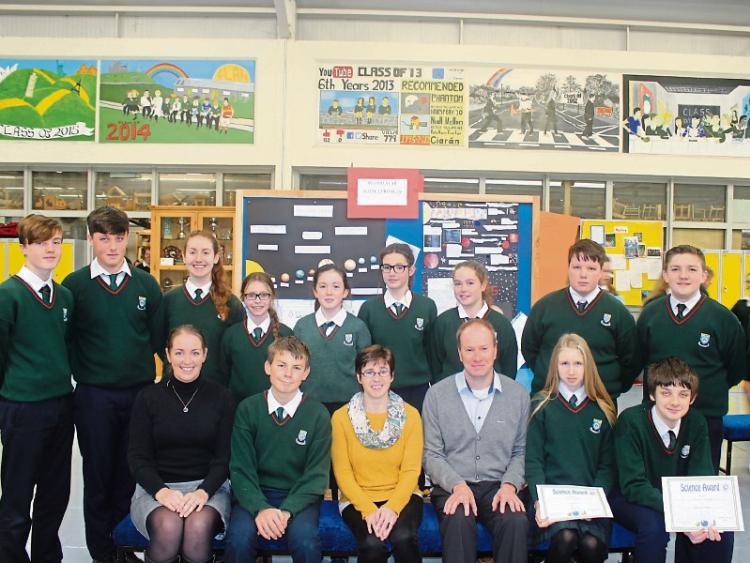 The school community approached the week with an air of trepidation; science week has become one of the most in-vogue of all the subject weeks. It is celebrated throughout the media. It seemed that the Angelus was the only programme that didn’t run with a science week slot!

But now that it has passed we hope that the planning and preparations were worth it and that it was enjoyed by all.

Throughout the week, to increase awareness among our community of Science Week, we used the T.V. monitors to display Science Trivia, “Question of the day” for 1st years, Photographs of our Science Projects and other slides showing the importance of all the sciences and how it interacts and intertwines in our daily lives.

Next up was the science tour to Moorepark in Fermoy. 5th years embarked on our tour, but thanks to the quality of what Moorepark had prepared for us, what returned on our bus to Cashel was an absorbed and engrossed bunch of budding scientists. Students had been shown the science behind Moorepark’s working farm, how foods and bacteria were being altered to improve productions. They were given the opportunity explore a vast variety of research being carried out in Moorepark as well as a chance to speak to a number of PHD students about their various career paths to date.

One of our other well-received activities was our “micro-teaching”, which comprised of a number of our 2nd and 3rd years became a science teacher for a class to the first year students. This gave them a great insight into the classroom from a teaching perspective.

Our central and foremost activity was the 2nd year Amneal Science Projects. It is the 3rd year running that Amneal Ireland Limited have so kindly offered to sponsor our project competition. Cashel Community School are so thankful to Amneal Ireland for not only their sponsorship but for their interest, their commitment and a special word of thanks to Mary White and Gearoid McDermott from Amneal Pharmaceuticals in Cashel who opened their busy schedule for us to award the prizes and address the students.

So that’s it – another Science Week has reached its twilight, another week beckons in 2018 but until then we will enjoy our journey through the sciences...