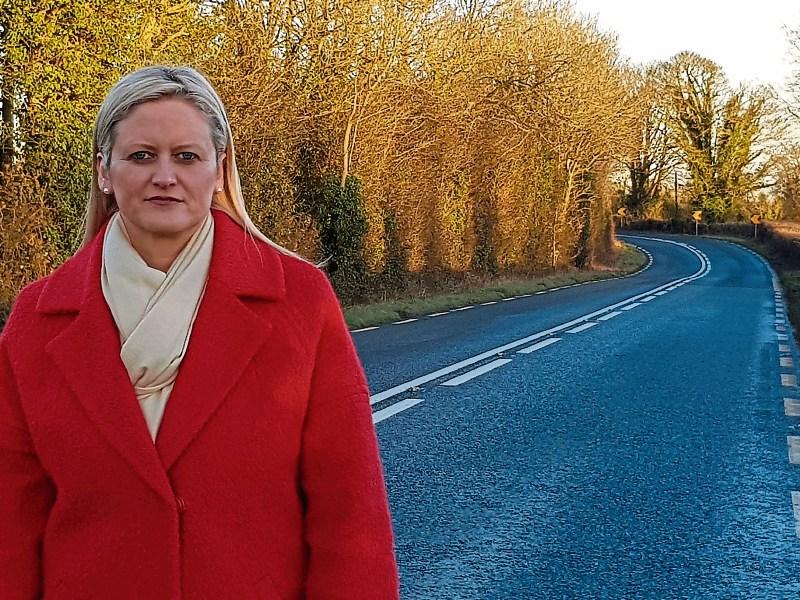 Cllr. Siobhan Ambrose is lobbying for safety measures to be implemented at this dangerous bend at Seskin in Kilsheelan, the scene of a number of accidents in the last month.

An urgent appeal has been made to the T.I.I. (Transport Infrastructure Ireland) to carry out safety improvement works to the bend on the main Clonmel-Kilkenny road at Seskin in Kilsheelan, Co. Tipperary.

The call has been made by Cllr. Siobhán Ambrose, who says there have been five accidents in the area in the past month.

She says that lorries were involved in some of these accidents, and local residents have expressed concern about safety on the road.

"Last year I raised this issue again following requests from locals, and the T.I.I. carried out re-texturing works to the road surface at this location and it improved conditions at the time", says Cllr. Ambrose.

"But unfortunately, for whatever reason, this section of road has disimproved since then and it has now become a black spot for accidents.

"I fully empathise with the fears of local residents. They're worried that someone will either be killed or seriously injured at this location if something isn't done about this section of road in the immediate future", she added.

Cllr. Ambrose says the T.I.I have agreed to provide flashing road signs on the approach roads to the bend, requesting motorists to drive slowly.

They have also said that they are currently reviewing the previous scrim-testing reports that were carried out on this section, and will report back to Tipperary County Council.

Cllr. Ambrose raised the issue at the most recent meeting of Clonmel Borough District, when District Engineer Eamon Lonergan said that the County Council had informed the T.I.I. of the recent accidents and requested a review of the road.

Cllr. Ambrose says she was successful in getting the T.I.I to carry out safety works at the Ormonde Stores Junction in Kilsheelan last year.

She is currently lobbying the T.I.I. to carry out safety improvement works at Darling Hill in Clerihan and the Ballybeg Junction in Clerihan.

She was also pleased that the T.I.I. had agreed to provide flashing warning signs on either side of Rathkeevin school on the Clonmel-Cahir road, and that the public lighting near the school had been upgraded.