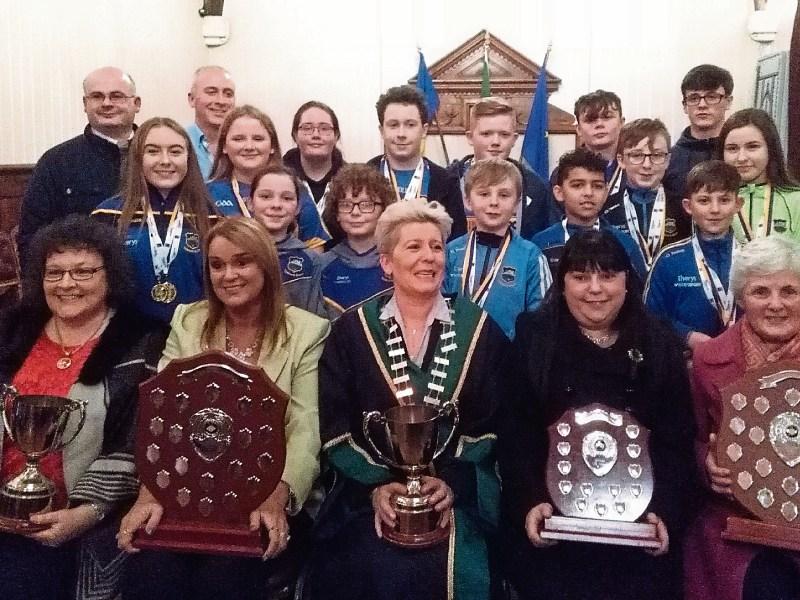 A very enjoyable and memorable evening was held in Clonmel's Town Hall, where District Mayor Catherine Carey hosted a reception for the All-Ireland-winning Under 12, Under 14 and Under 16 Skittles teams from the Ss Peter and Paul's parish area of Clonmel.

The Mayor presented certificates to all team members and to their mentors in recognition of their achievement, and also to acknowledge their dedication to the national Community Games movement.

It was an amazing achievement for the Ss Peter and Paul's parish area to win a hat trick of titles at All-Ireland Finals.

The first year that Ss Peter and Paul's Skittles teams won gold was a decade ago in Mosney.

Thereafter the National Finals moved to Athlone, and at this venue Ss Peter and Paul's teams won on numerous occasions.

Having already been together as a team for a number of years, 2017 was to be their final year of eligibility for Community Games skittles.

And with that in mind all teams, especially the under 16s, put in hours of dedicated preparation, and were out playing on the skittles rings at Fairfields, Clonmel, day and night, in all weathers, in an effort to have everything just right.

Having come through the county and provincial finals, what a magical and memorable weekend Abbotstown proved to be for all three teams, winning their semi-finals and then finals to claim coveted gold medals.

A huge thank you is extended to all their coaches Mary Lambe, Caroline and Robert Hogan, and treasurers Kay Lyons and Sandra O'Dwyer (PRO South).

The Community Games committee are also grateful to  the Mayor Catherine Carey for the wonderful evening and the refreshments provided, which was very much appreciated. Thanks also to the councillors who attended, for their kind words for the teams and for their families.

Appreciation was expressed also to all the families for all the travelling to and from UL and Abbotstown and to all for their comforting hugs in times of victory but also in times of disappointing tears.

"We were on fire, and while we may never again achieve the heights of last year we will continue to do Tipperary proud in Community Games in 2018 and beyond”.

On the night the Ss Peter and Paul's contingent also remembered their dear departed friend Matt Anglim, who was a guiding mentor for Community Games skittles in County Tipperary for many years.

Finally, all in Community Games send get well wishes to  team member Shannon O'Donnell who was unavoidably absent from the reception.