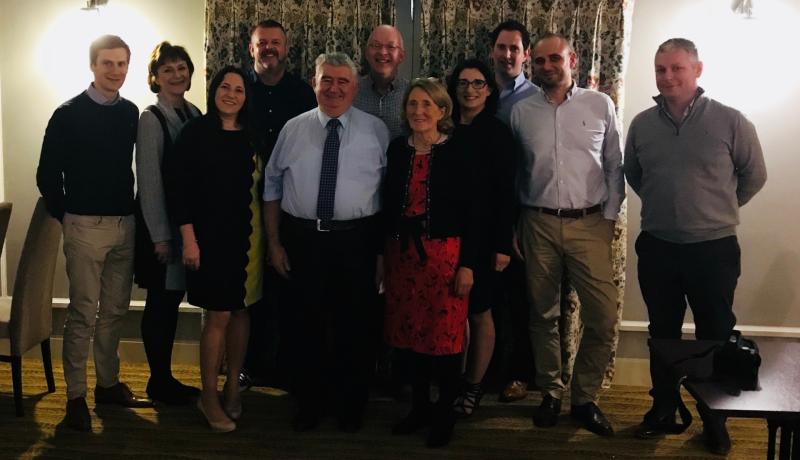 A Tipperary man who suffered a massive heart attack last May has described his recovery as “nothing short of a miracle” and has now made it his mission to encourage every community in the country to install a defibrillator and teach people how to use it.

John Carey from Dundrum, County Tipperary, says he owes his life to his work colleagues and the staff of the Abbeyleix Manor Hotel after he suffered a massive heart attack last May which left him in a coma for nine days.

The 68 year old had been due to meet work colleagues on May 23 last, however while sitting in the hotel lobby Mr Carey collapsed from his chair in what would later turn out to be a massive heart attack eventually requiring a quadruple bypass.

“I don’t know what happened exactly but I’m told I slipped off of the chair and was unresponsive. My friends jumped into action straight away and began CPR while the staff took out their defibrillator and cornered off the area in the hotel where it happened,” Mr Carey explains to the Tipperary Star.

While waiting for ambulance crews to arrive, staff at the hotel continued to work on Mr Carey and eventually administered five shocks to his heart with the defibrillator before getting a pulse. Coincidentally staff at the hotel had received training in how to use an AED machine only days earlier and Mr Carey says their swift action was crucial in his recovery.

“The doctors told me it was like a light switch and the electrical part of my heart just switched off. I wasn’t in any pain and I don’t remember even going to Laois that morning. It was a really severe heart attack as usually a defibrillator administers three shocks and that should bring back a pulse but I needed five just to get things started again,” he says.

After ambulance services arrived they took Mr Carey to Portlaoise Hospital where he was placed on a ventilator before being transferred to St. Jame’s in Dublin.

After several weeks at the hospital Mr Carey was deemed fit enough to undergo surgery for a quadruple bypass. However with his recovery slowly taking shape, Mr Carey’s medical team feared he would be left with brain damage due to the severity of the heart attack.

“My wife and family were told that it was a strong possibility as I had been out for so long and the heart attack was so severe but miraculously there was no brain damage at all. The doctors are amazed at my recovery and have told me the heart attack was as serious as it could have been. I know I’m incredibly lucky to be alive and so well. It feels like I’ve won the lotto," he told the Tipperary Star earlier this week.

Earlier this month Mr Carey and his family returned to the Laois hotel to celebrate his 69th birthday and express thanks to the management and staff.

“I can safely say I wouldn’t be here today if it wasn’t for the actions of everyone in the hotel that day. The staff at each of the hospital’s were also tremendous and I received excellent care.”

Since his recovery Mr Carey has also become involved with local defibrillator training groups offering to share his story about the importance of being trained in how to use an AED device.

“I defied the odds and I’m here to tell my tale, getting stronger every day. Every town and village in the country needs a defibrillator and properly trained instructors. I'm proof of how a defibrillator can save a life,” he said.